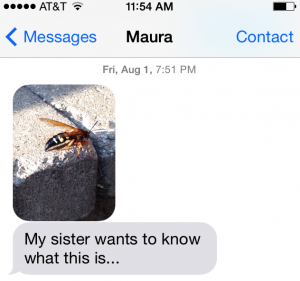 One of the joys of being the resident entomologist in my family and circle of friends is that I frequently receive “What’s this bug?” texts and emails.

Recently, the texts came fast and furious with questions about a giant, strikingly marked wasp. I relished in replying to these queries as this species has a most fascinating biology, the stuff that would make good fodder for a horror movie. Meet the cicada killer wasp (Sphecius speciosus)!

Cicada killers are large solitary, ground-nesting wasps that specialize on hunting – you guessed it – our loud, buzzing friends of late summer, the annual cicadas. The female cicada killer, equipped with a stinger at the tip of her abdomen, visually searches the treetops (much like we did during our recent urban cicada safari) for an unsuspecting cicada hanging out on a branch. She uses her legs to lock onto her prey and paralyzes the cicada with a quick sting. Then she begins the laborious journey home, prey-in-foot.

An annual cicada can weigh twice as much as the wasp carrying it so the flight back to the nest is anything but graceful. Friends of mine caught a female in the act, struggling with her quarry and sent along this fabulous video footage. I’d call it more of a drag, then a flight.

The cicada killer then hauls the live-but-paralyzed cicada into a tunnel-shaped nest where she deposits the prey in a chamber at the far end of the tunnel. Cicada killer burrows can be as long as 3 feet and extend up to 2 feet below the soil surface. Mama then lays an egg, always under the left or right second leg of the cicada, and seals up the chamber.

A few days later, a cicada killer larva emerges (it’s a juicy grub) and begins the gruesome act of eating the paralyzed cicada alive. Why not just put the cicada out of its misery? Turns out dead cicadas grow nasty mold that can kill the growing larvae, whereas fresh-but-paralyzed cicadas do not.

The larva overwinters in a hard cocoon and emerges the following summer, typically in July and August, just in time for the appearance of annual cicadas. In Raleigh, we’ve seen cicada killers and annual cicadas well into September this year, most likely a function of a cool, wet summer that delayed emergence of both predator and prey.

Despite their large size and striking coloration, there’s no real reason to fear the cicada killers. Males lack stingers and females are looking for prey, not to attack you. Keep your shoes on when walking around cicada killer ground nests and you’ll eliminate most risk of getting stung (by accidentally stepping on one).

Special thanks to the Innis and the Brent-Hanke families for video clips and photos.