A Gala of Stories, Foods,and Insights from the Study of the Life in Homes 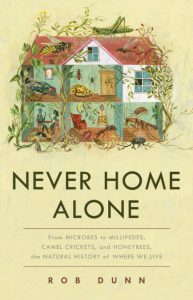 Beginning ten years ago scientists at North Carolina State University dared to go where few had gone before. They began to explore the biodiversity of belly buttons, bedrooms, backyards, showerheads and food. But they didn’t do it alone. This work required the collaboration of scientists at many other universities as well as that of thousands of non-scientists around the world who helped to take samples, to ask questions and even to think about new kinds of analyses. Now, Rob Dunn and the large team that carried out this work, are ready to report back to participants and to the public in general about what has been found.

On November 15th, we will host a gala event, a kind of public, science party. To kick off the event, Rob Dunn will talk about his book Never Home Alone. The book tells the big story of the tens of thousands of species discovered in homes. It argues that, as often as not, more biodiversity in your home ends up being better than less (even, as it turns out, when it comes to your showerhead). After the talk, more than fifty scientists who have been involved in the work will report on their own pieces of the big picture. And, of course, there will be food and drink, and live music (played, of course, by scientists, in this case MJ Epps and the thundering tardigrades). Both the food and music will be inspired by the study of the life in homes or, in some cases, even made using the life in homes. One of the realizations of the scientists studying the life in and around our homes have made is that such life is often very useful. Some of these species, for example, are useful in making beer, bread, cheese, coffee, kimchi and other foods, all of which will be available for sampling at the event.

If you would like to attend the event on the 15th, stay tuned. Free tickets are available via Eventbrite.  You must register for a free ticket to attend, even if you are one of the participating scientists.

If you are a scientist (or historian or other scholar) and would like to attend the all day meeting on the 16th send Rob an email.

The details for the 15th

1) The main talk will be in the auditorium at the James B. Hunt Library from 7pm until 8pm.

2) From 8 pm until 10 pm there will be time for the audience to go upstairs to the Duke Energy Hall at the Hunt Library and visit posters and tables hosted by 40 different scientists. Those tables will include things people can take home, books to buy, and food and drinks. Scientists will be at tables and posters but also mingling amongst the crowd with t-shirts indicating what they study (e.g., “Ask me about my face mites.”).

In the open space outside the Duke Energy Hall, MJ Epps (who studies fungi and camel crickets) will be playing Old Time Music, as part of the band, MJ Epps and the Thundering Tardigrades.

Science featured at the event will include… the life in extreme habitats indoors (Justin Hills), the unusual climate indoors and how it relates to human evolutionary history and preferences (Michael Just), the uses of indoor dust in forensics (Julia Alwood and Kelly Meiklejohn), the ways in which climate change may affect indoor fungal allergens (Bene Bachelot), the big picture of the life in dust and how it varies from one region to another (Albert Barberan), the life in showerheads and when it is good and when it is bad (Matt Gebert), the ways in which biologically diverse aquifers helps keep tap water safe, and why some urban tap water is not filtered or treated in anyway (Amanda DelVecchia), the algae of house gutters (Hilary McManus and students), the North Carolina State University insect collection (and what it says about the changing life indoors; Bonnie Blaimer), the stories of the common, and some rare, arthropods in homes (Matt Bertone), the ants in homes and backyards (Eleanor Spicer Rice and Magdalena Sorger), camel crickets and their uses (Stephanie Mathews and her students), carpenter bees, their homes and their mysteries (Elsa Youngsteadt), the rapid evolution of German cockroaches in response to pesticides (Ayako Wada-Katsumata), kissing bugs and their consequences (Lorena Simon), the secret lives of termites (Aram Mikaelyan), the proclivities of face mites (Megan Thoemmes), the bacteria-cutting wings of cicadas (DeAnna Beasley), what spiders tell us about our lives (Christine Hawn), the lives in spiders in homes (Tyler Corey), using backyard ants to find new antibiotics (Omar Halawani), the microbes on a dogs back and in its mouth (Julie Horvath-Roth and students), the largest ever study of the guts of humans (Daniel McDonald), the life in clothing (Amy Grunden), the biodiversity of belly buttons (Britne Hackett), the movements of a thousand cats around the world (Roland Kays and students), heart worms, dogs, mosquitoes and humans (Meredith Spence), the warrens of New York rats and mice (Jason Munshee-South), brain-manipulating parasites carried by cats (Mohammad Alyetama), the stories of humans and food and a chance to share your own story (Matthew Booker), the life in cheese, including mites (Christina Roche), the history of cheddar cheese (Chad Luddington), kombucha tastings, wasp beer, finger-flavored kimchi, sourdough bread, and much more.