The Leopard in your Showerhead

Your showerhead is personal. It is the conduit through which water falls on you to keep you clean. It is also full of life. Showerheads can, in other words, clean you and dirty you at the same time.

We are interested in the life in showerheads, particularly the life that accumulates in biofilms (tiny microbial cities) inside the showerheads. There are many reasons to be interested in these biofilms. For ecologists, these biofilms are relatively simple (they tend to contain few species) and discreet enough to be understood. They are an opportunity to test the newest theories. For medical researchers, these biofilms can contain pathogens. For those who study cooperation, biofilms offer a model of how bacteria work together. All of these things are interesting, but among the very most interesting things about biofilms is that lurking in them we often encounter species with the potential to perform useful services for humanity. Biofilms are a font of innovation, new possibilities spraying down upon you each time you bathe.

This week we (and by “we” I mean Matt Gebert) finished a round of the identification of the microbes in showerheads from across the United States. We have almost finished the samples from Europe as well. Finished is very relative. We can now share a map of what we know so far. Each point on the map is near a sampled showerhead. The points don’t exactly match the location of the homes so as to preserve the anonymity of the homeowner. The results displayed by clicking on each point on the map include the presence and relative abundance of each of the top 25 most common genera over all.

What we know so far is just the very beginning of the story we are unraveling, the split end of a string connected to a vast tapestry that we hope to unravel bit by bit. What we have so far is a list of names, the names of the basic kinds of microbes found in each showerhead. We know the general names of the microbes (their generic names), but not the names of their species or strains. This is important caveat because very often the same genus (or even species) of bacteria includes both incredibly useful species and some dangerous ones. The genus Staphylococcus, for instance, includes both of the pathogen MRSA and of the most common beneficial skin microbe. The level of identification we have so far can’t distinguish these two forms. The problem is akin to learning that you have a species of the family Felidae in your basement but not knowing whether it is a house cat or a leopard.

*Please remember this no matter what information you obtain from googling these creatures:  Remember that we live in a world surrounded by microbes. We have focused here on showerheads. There are microbes on everything in your house. To be alive is to be, constantly, bathed in life. We live in harmony with most of the microbes around us most of the time. As you google these creatures, remember that just having them in your should does not necessarily mean it in anyway impacts your health negatively. We think most of these species are likely to be beneficial, either to you or to society. And we can’t tell yet, based on the analyses we have done, which of these species are the good ones and which the bad, nor will you be able to with the powers of google. What is more, a species that is absolutely necessary for your survival in one moment is potentially dangerous the next. And regardless of what lives in your showerhead the one thing we can say for sure is that it is more likely to be beneficial (and less likely to be dangerous) than the microbe found on your neighbor, kids, or dog. So enjoy a good shower and stay away from the neighbor. Furthermore, not one of the scientists who contributed samples to this study is worried about the results or in any way changing their showerheads at this time. All of the scientists in this study continue to shower, unbothered by the rain of life falling over them (To be honest, to the extent to which we worry about showerheads it is about how to get funding to study them, not what is spraying out of them onto us).

Meanwhile, what we do know is that some of the genera of microbes we have found in showerheads are absolutely fascinating. We have found, for instance, in many homes, species of the genus Delftia. We are collaborating with Carlos Goller to study these species in more detail (particularly on the NCSU campus) because they, drumroll please…. can accumulate trace quantities of gold from water and precipitate it in larger clumps. They can precipitate gold out of tap water. They poop gold! Here then are the alchemists of your bathroom, or at least they are one of the alchemists, hardly the only ones. 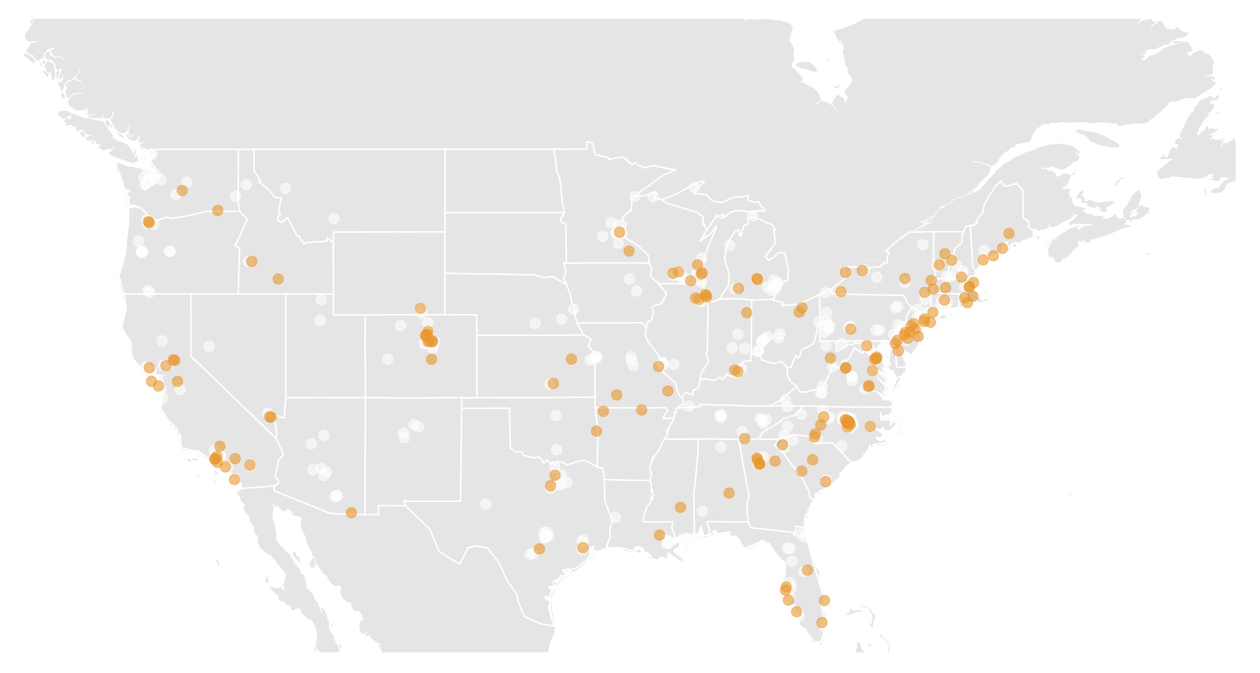 Above is a map of where we found Delftia (orange dots) in showerhead samples.

We are now going, one by one, through the microbes we have found to figure out more about them. The genus Mycobacterium is a focus of our analyses, but it is also among the most complex bacterial genera and so deep insights about its biology will take time. In the meantime, we thought you might want to know about the biology of some of the more unusual microbes we are finding, particularly those that mightbe useful. Via email, I asked Anne Madden, our resident expert on finding useful microbial species in the everyday world which of the other species we were seeing in showerheads she thought might also be useful. Anne looked at the list and said, “This is so cool!” She then began to type some answers. Here are some highlights from what Anne saw. Anne’s notes came in the form of a series of ever more excited gchats and emails. They are herky jerky and disconnected. Sometimes science is like that. We find a new world and aren’t quite sure where to focus.

Then a few minutes went by and…

“Caulobacter has a particularly cool lifestyle—even among microorganisms! Caulobacter is a bacteria that has a lifestyle like a plant. Just like a plant it will grow from a long stalk. The stalk anchors it to a watery home: a bit of decaying material in a lake, a rock in a pond, a pebble in a stream. Anywhere that has a bit of phosphorous in it that—again like plants—it uses as a fertilizer. If the phosphorous gets low, the stalk will grow longer. The stalk can grow up to 30 times longer, pushing the Caulobacter cell toward nutrients. But if no nutrients are found, the Caulobacter grows a second cell. Rather than just making a copy of itself, like most bacteria do, it makes a cell where a tail replaces the stalk. This is the seed life style of Caulobacter. This new seed has the same goal as a plant seed: find somewhere new with nutrients to settle into. The tail on this new cell helps it swim through the water for up to 40 minutes, before it descends onto a new location to form a stalk and start a new life. Awesome. That is happening in my shower. Man.”

Some minutes went by. I took a phone call. I talked to someone about sourdough bread, then cheese. I spent a while scheming a new project on the ecology of pants and then Anne sent some more…

“RB41. You found RB41! Damn.  It’s found in dog noses and your shower, but we’ve never been able to grow it in a lab. RB41 is a group of bacteria full of mysterious species we know almost nothing about (except that they don’t seem to cause disease). Also, they are found on paleolithic paintings, cave art.”

There you have it, a beginning. As we learn more, we will continue to send updates. Don’t expect a singular revelation. Showerheads are too complex for that. Expect instead a process akin to the lifting a stage curtain, behind which is another curtain, and another curtain, behind which will always be another curtain. We will be sending more information shortly on what we know from the literature about these individual genera, why they are living in your showerhead, and why they may be in your showerhead, but not others. Your showerhead is a stage play of the miniature being acted out by microbes waving on wild stalks, microbes pooping gold and microbes that grow in abundance except when we try to feed them. In this your showerhead is a heightened microcosm of the microbial world more generally, a world we tend to run from and yet a world, all the same, in which the average species is far more likely to be able to help us than to harm us, far more full of wonder than horror.