From the Bench: Nick Kamkari on the Sourdough Project

Sourdough is a bread made from dough that has been fermented with bacteria and yeast. One of the oldest sourdough breads dates back to over 5700 years ago and was excavated in Switzerland, but sourdough likely originated from agriculture in the Fertile Crescent thousands of years earlier.[1] Rich in both history and and microbes, I guess you could say making sourdough is a particularly cultured endeavor. The initial steps of making sourdough require “starters,” which are water-flour fermentations made up of yeast and lactic acid bacteria.[2], [3] A fermentation is merely a chemical breakdown of a substance by microorganisms like yeasts and bacteria.[4] In the case of sourdough, yeasts break down sugars and produce carbon dioxide, which leavens the bread.[5] Lactic acid bacteria break down sugars to produce lactic acid, which creates the “sourness” of sourdough by increasing the acidity of dough. [6] My work in the lab focused on learning more about microbes living in flour, and if flour can be a potential source for the microbes characteristic to sourdough; at this point, it is unclear to the scientific community where the yeast and bacteria in sourdough starters come from .[7], [8] [9] My research at The Wolfe Lab is part of a citizen science project in coordination with The Rob Dunn Lab to learn more about the microbial inner workings of sourdough starters.[10] 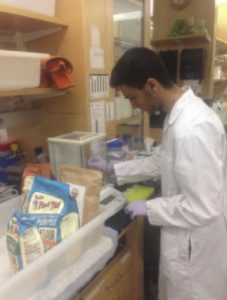 This is me plating out different types of flour rather early on in the experiment. Do not be fooled by my masterful pose; the uncertainty of being a beginner is strong in this moment.

As a part of this effort, we have received hundreds of sourdough starters from individuals around the world for analysis. A map of where all the starters came from can be viewed here. Helping to process these samples of sourdough made me a guest to a plethora of smells as well as a detective to a wide array of microbes. Sourdough starters were sent in from everywhere from Stockholm to Santa Fe, many harboring stories of passed down family traditions in addition to microbial mysteries waiting to be unraveled.

One of the overarching questions of this experiment was if flour could be the origin of many microbes that characterize sourdough, so the first step was buying several different packages of flour. To be thorough in our analysis, we made sure our flour selection was eclectic; I used everything from standard all-purpose flour to organic pumpernickel and dark rye. Our lens into the microscopic community in each of these packages of flour was formed through plating samples of each flour onto media that selects just for bacteria, media that just selects for yeast, and nonselective media.

Prior to this experiment, I actually thought that unopened store-bought flour would be more or less sterile, as they are made in highly-controlled factories and because America is pretty obsessive about cleanliness. But I was strikingly wrong; after taking our petri dishes of flour out of the incubator, I was amazed to see that they were spotted with gargantuan globules of microbial growth of various colors, textures, and shapes. A couple of plates had touches of hot pink growth that happened to be yeasts.

Several plates had microbes digesting all the way through the jelly-like media down to the glass of the plates! Our detective work had just begun. 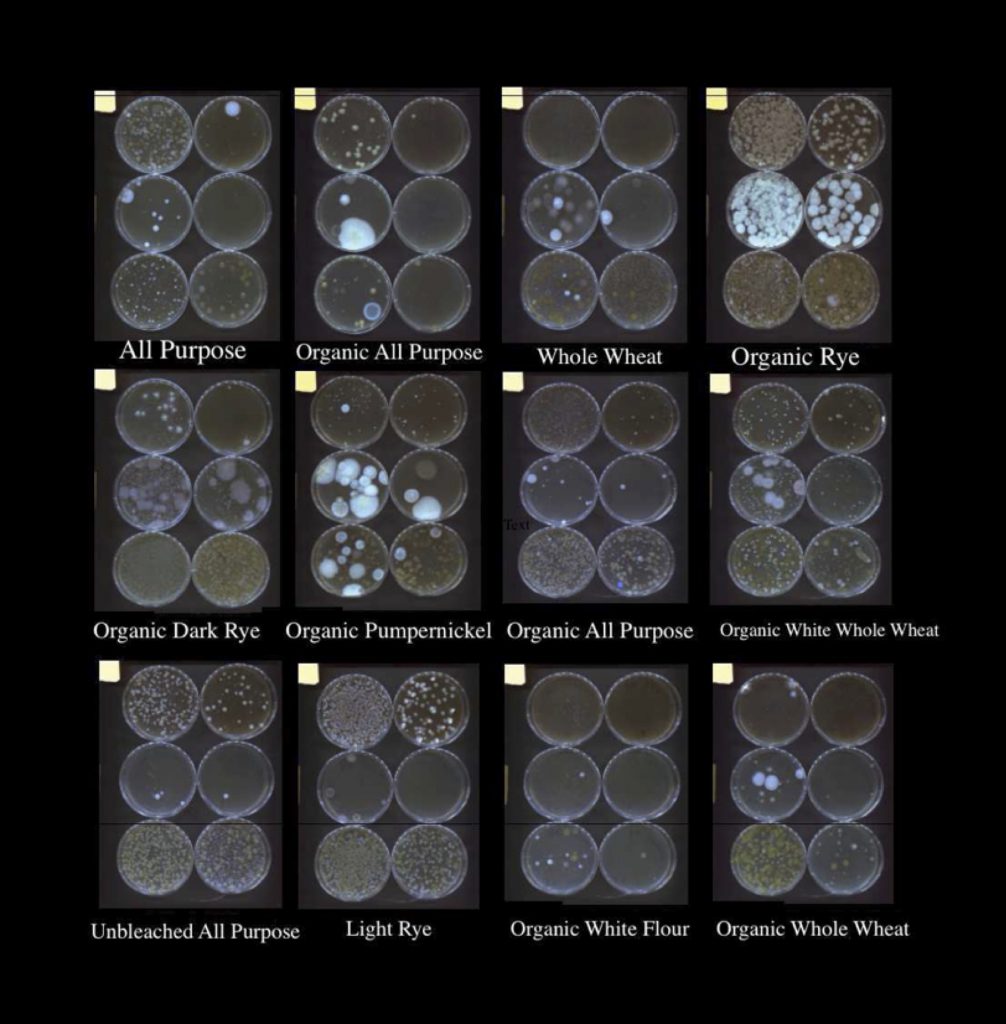 Now the goal was to put names to the faces of the microbes that were isolated from our flour. In order to shed light on the microbial characters that had made expansive, almost chaotic homes out of our small petri dishes, we extracted their DNA. We then sequenced specific genomic regions, and matched the information encoded in the DNA we extracted with public databases. At this point, we able to determine the species of many of the microbial colonies that had been isolated from flour. The DNA extractions required quite a bit of laboratory gymnastics and patience that gave me some insight into the meticulous inner-workings of science.

Bacteria were found to be the top constituent of the majority of our flour plates. As expected, many of our microbial colonies isolated from flour were determined to be of the lactic acid variety, suggesting that flour may in fact be the source of some of the microbes that help define sourdough.

This project was my first experience in a lab, so every day was truly a learning experience. Whether I was working to pipette a few microliters of essential enzymes such as lysozyme to puncture bacterial cell walls or waiting for samples to heat up to the right temperature, it dawned on me that conducting research is a strikingly humbling experience that is a real test of dedication. Although a microbiology lab is all about studying the proliferation of microbes, you do not want to necessarily let random air-borne microbes find shelter in your petri dishes, so working right as close to a bunsen burner as possible without catching anything on fire is just one example of something that becomes second nature in the lab. Moreover, redoing steps of the experiment, such as re-plating flour, was intertwined with the research process, but with many things in life, it’s the little pockets of precision that make all the difference. In conclusion, it was both a privilege and a pleasure to work on such a fascinating experiment and to play a role in a global project of food-based microbiology. 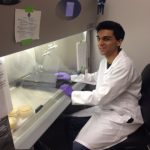 This has been a guest post by Tufts second year Nick Kamkari.

Thank you to Professor Benjamin Wolfe for letting me be a part of this deeply fulfilling project, and for being a mentor and a genuine friend. Thank you to Elizabeth Landis for your incredible guidance from the start. Your dedication and patience stretched out to a special sort of infinity. Thank you to Kinsey Drake and Shravya Sakunala for your brilliant work on this project and help you have given me.