What to Do About the Ants in Your Kitchen

It all started in a street median in Manhattan, not far from Mary Tyler Moore’s apartment. Marko Pecaravic decided to do a thesis on the ants of street medians, ants like those that live along Broadway and elsewhere in Manhattan. The thesis was directed by James Danoff-Burg and I would co-mentor it. That thesis, and other work with Jim, would lead me to realize that for many species, and especially for ants, that discoveries lurked in our collective backyards. Scientists overlook backyards in favor of more remote settings. Non-scientists overlook backyards, assuming that someone else understands them. No one understands the life in backyards. Our backyards and even homes are our collective blind spot, filled with species we have barely begun to study. Marko’s work on the medians in Manhattan would lead to the discovery of two species not previously known to be present in New York City, the Asian Needle Ant and, also, an ant that was called at one point in the New York Post, “the ruffi ant,” a species of Lasius that remains, as of yet, sufficiently poorly studied that we aren’t sure to which species it belongs.

No one understands the life in backyards. 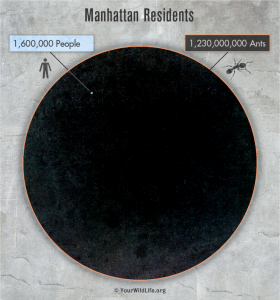 In Manhattan, as in most places, live many more ants than humans.

The work with Marko and Jim precipitated many subsequent studies in cities and backyards. Clint Penick figured out that some Manhattan ants eat so much corn syrup from human food waste that it makes up a large proportion of the carbon atoms in their bodies (nearly as much as it does of the bodies of New York kids)[1]. Elsa Youngsteadt showed that rats and ants compete for food in the city, such that it is very likely that the abundance of ants helps to keep the rats (a little bit) in check [2]. Sean Menke studied an ant thought to be an urban mutant, a strange variety of Tapinoma sessile that had evolved the ability to have colonies that span a city block and have tens or even hundreds of queens. Sean showed that instead of being a mutant that this ant (the odorous house ant) has a flexible social system and that many different lineages (one might call them strains or subspecies) of the odorous house ant have independently moved into cities and that each one has adopted this way of urban living, many queens, many babies, enormous societies [3]. Benoit Guenard, in turn, revealed that the one of the very most common ants in Raleigh, my city, was introduced from Japan more than a hundred years ago and had only recently begun to take over [4]. Eleanor Spicer Rice showed that this ant, the Asian Needle Ant (Brachyponera chinensis) competes with (and is displacing) Argentine Ants (Linepithema humile), through some combination of subterfuge and submission [5] [6]. No one had noticed the change. Meanwhile, Benoit went to Japan to look for the ant in its native land and, in doing so, found another species, this one new to science, in Tokyo [7]! Benoit also found the yeti ant, an ant thought to be a fabrication, the imaginings of a wayward entomologist, alive and well, not far from a sidewalk in the city of Cary, North Carolina (this ant species, Amblyopone tetragnatha, has never been seen again). These discoveries in backyards and cities have gone on. We have missed a great deal right where we live. But as we began to make these discoveries, it became clear that there must be much we were missing, much more than we could discover on our own and so we began to enlist the public in studying the life around us.

But as we began to make these discoveries, it became clear that there must be much we were missing, much more than we could discover on our own and so we began to enlist the public in studying the life around us.

It started with Andrea Lucky. Thanks to a National Science Foundation career grant, I was able to hire Andrea Lucky to begin to engage the public in doing science with ants, in partnership with the North Carolina Museum of Natural Sciences. Andrea started the School of Ants project to allow the public to go out and sample ants and send them to us, so that we would have a better sense of what lived where. We would send out, we thought, kits to allow the public to sample ants. That was a mistake. On the first day on which the project was announced we got several tens of thousands of requests for kits! We couldn’t do it. We would instead tell people how to make their own kits to sample ants. We would then sort the ants, one by one, and send them to experts to identify them (even experts in ants must turn to other experts on ants to be sure of what they are seeing). Quickly, collections made by kids, families, butchers, bakers, candlestick makers and physicists began to change our understanding of the ants around us. These new collections revealed that many of the most common ants were, in fact, species scientists had tended to ignore (And really didn’t even know were that common). The Asian Needle ant, thought before the study to be restricted to the southeast (and Marko’s one collection in Manhattan) was revealed by two eight year olds to also be present as far away as the Pacific Northwest. Some ants seemed to be new species [8]. Many studies would be done on these ants. Tyler Vitone used them to understand the history of the introduction of the pavement ant, one of the very most common ants into North America (it is Tetramorium sp. E, which is to say, it still doesn’t have a name, scientists will get around to though, we hope soon), a species that may well have come over with some of the earliest European colonists [9]. Warren Booth is using the samples to understand more about the odorous house ant and its spread. And much more. The School of Ants project in the United States would spawn a separate project in Italy led by Cristina Castracani (in collaboration with the science Museum of Trento), then one in Australia, led by Kirsti Abbott, then another in Denmark, led by Julie Sheard.

With time, among the most exciting things that the School of Ants data collected by participants offered was a way to know which ants were really most common, both in general and, thanks to work by Sean Menke and Corrie Moreau in Chicago, Amy Savage and others in New York (and now New Jersey), and Brian Fisher in California, especially in some cities and regions. We knew finally which species kids were most likely to interact with and that we, if we were going to understand any species around us, we definitely had to understand. We now had maps of each of those species too, based on the work of participants in the School of Ants. Then in stepped Eleanor Spicer Rice (cue dramatic and very happy music).

Eleanor Spicer Rice, working with the graphic designer Neil McCoy, pulled together a book about the stories of these ants, a book about the most common ants that would allow others to begin to pay more attention to them. The book was accompanied by the photos of Alex Wild, photos that have already opened up the world of ants to thousands of people who hadn’t previously had any reason to take note. The book is the stories of the most common ants, as told in the first person by Dr. Eleanor Spicer Rice and so the title seemed obvious, Dr. Eleanor’s Book of Common Ants.

After Dr. Eleanor’s Book of Common Ants once finished, we realized that we enough about certain cities or regions and their ants to focus in on those places. Eleanor wrote a separate version of the book focused on the most common species of New York City, and then one for Chicago, and then another on California. What was more, Eleanor befriended Chris Buddle and it became clear that such books were lacking for spiders too, and so was born, Dr. Eleanor’s Book of Common Spiders. Eleanor’s books are funny, they are engrossing and we hope that they lead you out among the ants (and spiders) to make the discoveries that we have so long neglected, discoveries about the species near to us every day. These books are now, at long last, available. You can order them here. But there is more.

In the intervening years, we have worked to figure out new ways to engage the masses, the multitudes, everyone, in the study of ants. One of the key barriers had to do with how to get these projects used in schools where they could simultaneously engage kids in exciting new ways (outdoors!) in science in process and the scientific methods (yes, plural) and collect new data. Working as part of a much larger effort, Students Discover, to engage students in science in process (in citizen science), Magdalena Sorger and DeAnna Beasley (the study of ants really does take a village, or at least a colony) worked with teachers to develop curriculum modules that allow teachers to achieve educational goals through innovative practices (and aligning to the Next Generation Science Standards) while also, again, doing real science. Andrew Collins was able to show that using School of Ants in the classroom increases teacher and student engagement in science [10]. 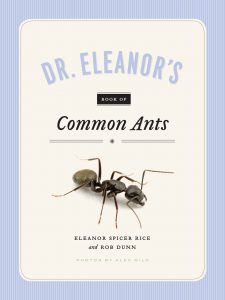 And so, to answer that question of what you should do if you have ants in your kitchen? Buy Eleanor’s books. Read about the most common ants. Then pick up a notebook and a pencil and watch what the ants you see are doing. For most of the common species in your house or backyard you may well be the only person in the world watching. Take pictures. Take notes. Make drawings. Share what you find with us. And as you do all of this, realize that the world is full of mysteries. Resolving these mysterious can be joyful and wondrous. But it is also useful. Ants have been around for more than a hundred million years. Each of the twenty thousand species of ants on Earth has figured out solutions to social living, problems that include how to deal with pathogens, how to control traffic, how to build highly functional structures and how to efficiently move and store resources. These are all problems we face too. In studying the ants, be they the species in your kitchen or those in a kitchen in the Amazon, we often find solutions to our own problems, but we can only find those solutions if we are paying attention and the more of us pay attention, the more we will see.

[5] Rice, Eleanor Spicer, and Jules Silverman. “Propagule pressure and climate contribute to the displacement of Linepithema humile by Pachycondyla chinensis.” PLoS One 8, no. 2 (2013): e56281.

[7] Yashiro, Toshihisa, Kenji Matsuura, Benoit Guenard, Mamoru Terayama, and Robert R. Dunn. “On the evolution of the species complex Pachycondyla chinensis (Hymenoptera: Formicidae: Ponerinae), including the origin of its invasive form and description of a new species.” Zootaxa 2685, no. 1 (2010): 39-50.

[10] https://academiccommons.columbia.edu/catalog/ac:176263. Andrew also coordinated the development of an amazing series of comics about ants. See more about Andrew and his work here.