Announcement: 6 to 100 Hires in Public Science

By the time the potato murrain arrived in Ireland scholars had already begun to explain its cause: a blight, a water mold. They had also begun to explore ways to mitigate the effects of the potato blight through shifts in the timing of planting and harvest and strict quarantines. In addition, some farmers had noticed a way to control the blight through the use of copper sulfate (which is still used). But in this moment, the voice of the scientists was too quiet and the willingness of the scientists to listen to those in the public who had ideas was too modest. As a result, the potato blight continued to ravage Ireland, unabated except for the occasional respite due to dry weather in which the blight did poorly, until the 1880s. In the interim, one million Irish died and another two and a half million or so left the island. That the potato blight became a famine was due to British policies, socioeconomics, land tenure, the planting of a homogenous crop (nearly all the potatoes were of a single type, the lumper) and many other factors, but it is hard to escape the conclusion that had the scientists who knew the cause of the blight spoken up more loudly and engaged the public and policy makers more directly, that many lives — hundreds of thousands — would have been saved. 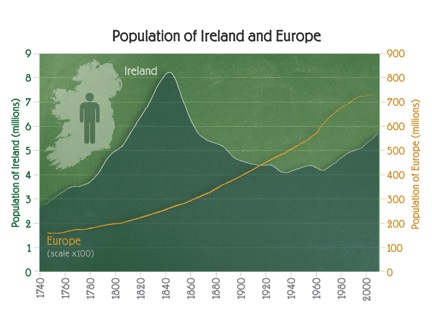 The story of the potato famine is relevant today because many of our most important decisions require us, collectively, to act upon the best science and for that science to be done in light of the needs AND KNOWLEDGE of the public, of the people. For this to happen, we will need to train generations of scientists able to engage the public. Doing so is not a luxury any more than communicating the cause of the potato blight was in the years leading up to the famine. The status quo is that we will fail in dealing with our modern challenge much as the scientists during the famine did during theirs. The status quo is scary.

Just as in the 1800s the stakeholders in our biggest decisions today still include farmers (who still deal with late blight), but also everyone else who buys food, gets vaccinated (or fails to), burns oil and gas or votes. If we fail to train scientists able both to engage the public and to listen to the public, we will face problems analogous to those of the potato famine. We will face episode after episode in which we fail to bring what we know to bear on the challenges before us. And these problems are serious. Climate change. Emerging human pathogens. Emerging pests and pathogens of crops. Diminishing water supply. The reemergence of preventable diseases. If we fail to engage the public in communication about these issues, in communication about what the best science says and how we know what we know, we risk catastrophes.

I mention all of this because at North Carolina State University we are attempting to build on our ability to engage the public in science. In particular, we seek to build on our ability to engage people in science in which the public is part of the scientific process, whether through citizen science or other means. Our goal is not modest. We cannot just add a handful of faculty to the university and announce ourselves done. Our goal is to change what science is at the university.

It is this crack with which we are concerned. Our goal is to create an environment in which light shines out of many corners of the university onto the public. We have already hired nearly a dozen scholars who engage the public in doing science, many more by some counts. Roland Kays in the College of Natural Resources engages the public in the study of mammals. Lindsay Zanno, in Biological Sciences, in the study of fossils and ancient evolutionary stories. Caren Cooper works with the public on the nesting biology of birds. Paul Brinkman, in History, will soon engage the public in the history of science from a glass-walled office in the NC Museum of Natural Sciences.  Holly Menninger coordinates engagement with the public across disciplines. Ross Meentemeyer engages the public in the study of the pathogens of trees. Adrian Smith uses videos to tell the stories of his new science and that being done by others. Even our deans engage in public science. Dean Mary Watzin, for example, has been a leader in citizen science as it relates to water quality. And for each of these scientists we have also hired those specialized in how best to engage the public, how best to listen, how best to educate, how best to crack open the wall. These hires are key steps in which many scholars, departments and colleges have played a role, key steps that have transcended the medieval feudalism of specialities, departments and colleges.

Now we are in the process of hiring four additional faculty members, in addition to two very recent hires.   Advertisements for the first two positions have been recently posted: a scholar who studies how best to communicate science while doing it and a scholar who engage the public in doing science (for example through citizen science). The first of these two hires, a senior position, will help to coordinate a new certificate program for graduate students on how best to engage the public in science (the program will include courses on science communication, but also ethics and listening to the public). The second hire is open rank and is for another new scholar to join our multitudes, another new scholar who engages the public in science. Next year we will focus on hiring a scholar in science education (to form a stronger bridge between our public science and the scholarship in education) and a scholar who is engaged in doing science in underserved and under-represented communities.

While our cluster hire includes six faculty positions (2 already hired, 2 open, 2 next year), ours is not the only cluster hire. There are also cluster hires in the study of microbiomes, visual narrative (how stories are told through images), water quality and ecology, plant pathogens and more. Our secret hope is that applications for these positions will also be flooded with scholars who seek to do great science with the public, with the public as a partner, with the public in mind, with the public shining light on the science and the science shining light back on the daily lives of the public. We could be an institution with a hundred positions where the best candidates are doing public science. It would be in everyone’s best interest. Trinity College has a corner through which light shines. Ours could be an entire shining campus, a place where, by bringing together scientists and the public, we create a light of discovery and shared insight unlike any other that has existed.

In the meantime, we are hiring four to a hundred faculty. If you or someone you know might be interested, please check out the position in science communication and the public scientist position in the College of Natural Resources.