You may have heard of a newly described species of leopard frog, the Atlantic Coast leopard frog (Rana kauffeldi) — also known as the coughing frog (main image, above). The chief zoologist at the New York Natural Heritage Program, Dr. Matthew Schlesinger, has organized efforts to learn more about the range of this newly described frog species with the support of a Regional Conservation Needs grant.

Where is this coughing frog and when can I find it?

The map of where participants can hear and record the coughing calls of the Atlantic Coast leopard frog can be seen below — we anticipate you’ll be able to hear the frog (listen to examples here and here) from now (mid-March 2015) til April here in the south (bright green on the map). It will likely be heard later as you hop further north. Note that folks might not hear the coughing frogs in Massachusetts until well into April, but researchers are unsure about timing which is why your data are so important!

The Atlantic Coast leopard frog is a newly described species and can’t be expected to conform to the date ranges previously identified for the Southern leopard frog it was previously confused with — so the old calling dates and ranges associated with the frog need to be parsed out. Its known range appears to be East Coast Coastal Plain areas from Connecticut to the Carolinas…and potentially further….we need you to help determine that range by recording its calls! 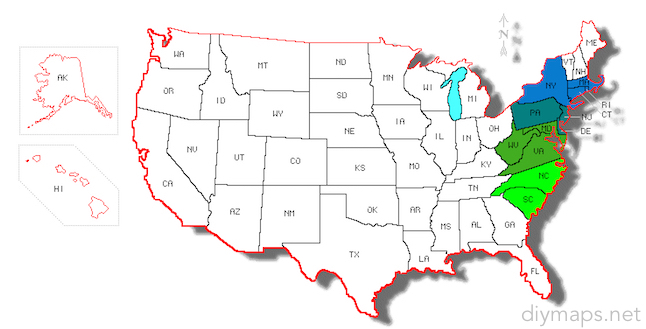 Why do you need my recordings of frog calls?

The species has for years been lumped in with Southern leopard frogs in collections and often called “wood frogs” in calling surveys…so now that we know how to tell them apart we need your help to provide digital “vouchers” of where this species occurs, which will help everyone figure out its conservation status.

You don’t get a chance to do major conservation and discovery work like this very often!

How can I help?

Ready to jump into a new citizen science project? Helping out with this project is simple — all it requires is a recording device (like the cell phone you’re likely reading this on) capable of emailing a short (10-30 second) audio file of coughing frogs chirping:

Where is the best place to take recordings?

To hear sample recordings of Atlantic Coast leopard frogs you can listen below or click here and here. You can also download the files to your cell phone so that you can reference them while in the field.

And for contrast, listen here to the quack of a wood frog:

We hope you have fun searching for frogs this spring — Hop to it! Be sure to email Dr. Matthew Schlesinger at matthew.schlesinger@dec.ny.gov if you have any questions about the project.