On September 2, as the 9-5ers emptied out of downtown Raleigh, we gathered near the State Legislature Building to embark on an urban insect adventure.

Led by Bill Reynolds, curator of the Arthropod Zoo at the NC Museum of Natural Sciences, we strolled the tree-lined sidewalks of the Legislature Complex, eyes peeled and ears tuned in quest of annual cicadas. 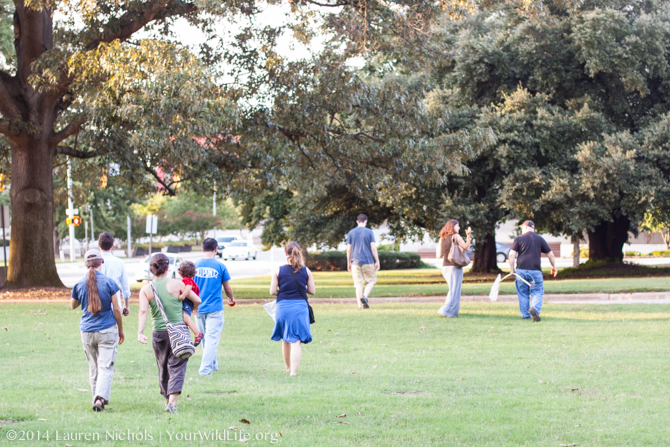 Unlike their periodical cousins who show up every 13 or 17 years in a given location, the annual cicadas – also known as dog-day cicadas – make a yearly appearance in late summer. You’ve probably seen the shed exoskeletons left by emerging adults on tree trunks. And most certainly you’ve heard their loud choruses from the treetops. These cicadas are responsible for the iconic buzz of summer. 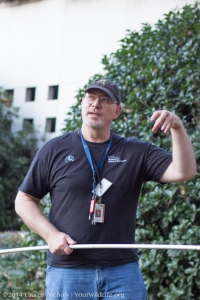 Bill is a special combination of cicada guru and ninja. Carrying an insect net with a 25 foot-long handle, he would quickly locate an adult male singing high up on a tree branch, catch it with a quick flick of the wrist and immediately identify it to species.

There are 21 described species of cicadas in North Carolina – and Bill knows them all. One can encounter about 10 of those species in the greater Raleigh area. On the evening of our cicada safari, we detected (and Bill caught!) three different species in the genus Tibicen:

Linne’s cicada (T. linnei) The outer edge of the wing (green in color) is rather bowed and the species has a well-developed black stripe on the underside of its abdomen. When you look at it up close, it has 3 simple eyes on the front of its head that shine like little specks of copper. Bill and other cicada experts have evidence (based on physical characters and male songs) that this species has been hybridizing with another annual cicada species (Eastern scissor grinder, T. winnemana) in urban and suburban areas across North Carolina. 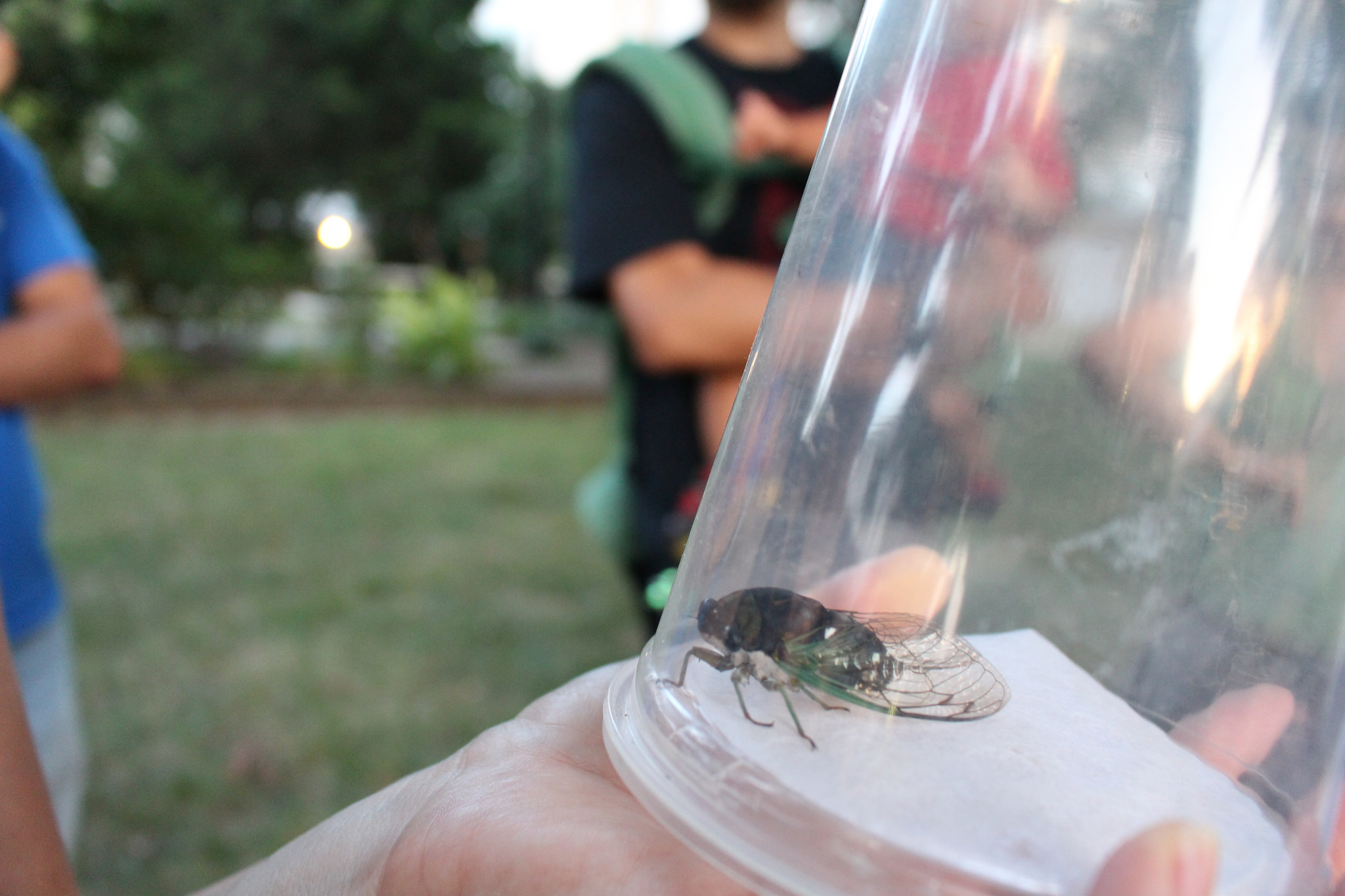 Swamp cicada (T. tibicen tibicen, also known as T. chloromerus) – This is the annual cicada one generally hears singing in the daytime. It too has striking green outer wing veins, but an all white abdomen. Cicada ninja Bill spotted and nabbed one on a branch… while it was sitting there silently. It’s also one of the few species you can identify from its exuvia (or shed exoskeleton) – It has dark chocolate or black-colored shoulders at the base of its wingpad.

Northern dusk singing cicada (T. auletes) – This species is the largest North American cicada. We were lucky enough to catch one in the act of emerging on the side of a tree, and then Bill caught one singing near the end of our safari. It’s more black and white in color, than green. And as we observed over the course of the evening, the dusk singing cicadas take over the sound space with their loud pulsing rhythm. By the end of our walk, it was the only species we could hear. 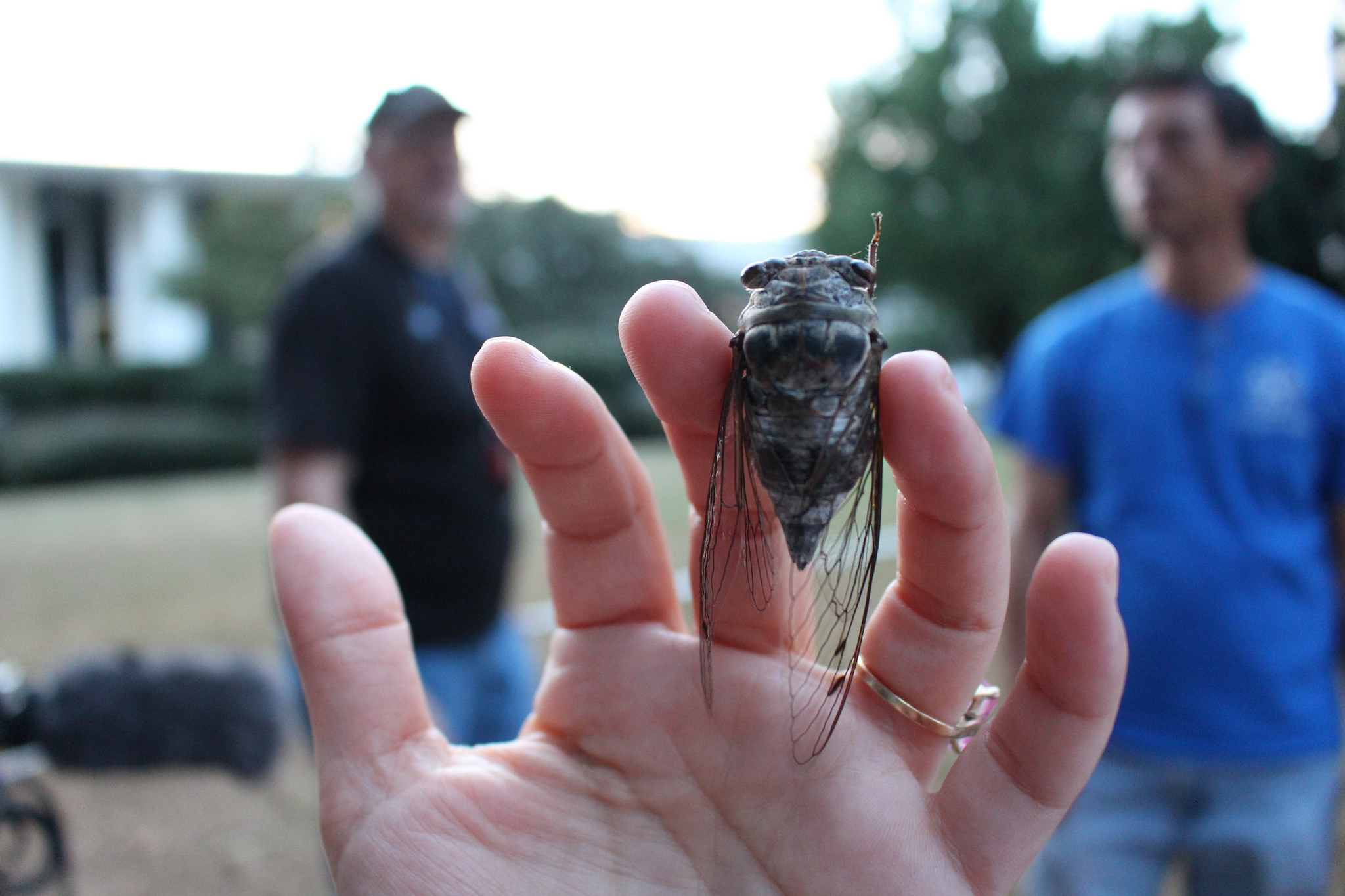 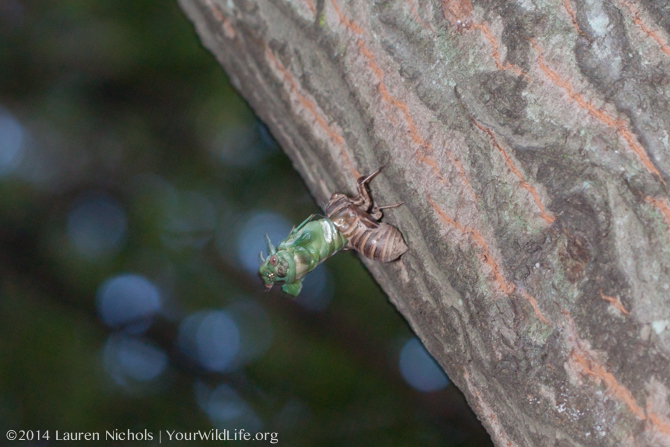 We put together a little audio postcard of our cicada safari so you too could experience the thrill of the hunt and the buzz of the cicada.

And if you thought we got excited on a little walk around downtown Raleigh, wait ‘til you see what Bill and the Arthropod Zoo, Your Wild Life, Steve Frank’s Urban Ecology crew and 100 other exhibitors have in store at BugFest 2014 on Saturday, September 20 at the NC Museum of Natural Sciences.

In fact, at 1:30p, in Windows on the World (main wing of the Museum), Bill will be doing a special presentation on cicadas – Learn how to identify some of the common species we saw by sight and sound!