Several years ago, we started paying more attention in our lab to what was going on biologically near at hand. This transition would eventually lead us into backyards, then houses, then colons, but it stared with North Carolina State University’s campus.

The campus is at what was once the western edge of the city of Raleigh, a city whose location was chosen by its originators as a function of its nearness to a bar. And yet despite this idiosyncratic origin, Raleigh has proven to be an auspicious ecological locale for a city and a campus, at least from the perspective of those of who enjoy the full diversity of insect life.

Raleigh is at the southern edge of cool temperate forest, the northern edge of the sand plains and the center of the Piedmont. It is a crossroads (which actually, not to digress too much, also explains the location of the bar). As a result, insect-beasts from each of these regions can be found in the city. The precise mix of legged life that forms in Raleigh is unlike that almost anywhere else. But times are changing. Raleigh is becoming ever more urban, hotter and more connected to the rest of southeastern sprawl than ever before

We wonder what effect these changes will have on the six-legged life of which we are so fond, species such as the ants. We wonder too about the effect of the many new species that have arrived in the region, whether because urbanization has created conditions that are more like southwestern deserts than cool forests and hence favor desert-adapted species, or because we have introduced species into the region that are tougher in one way or another than our native ants, species such as fire ants, Argentine ants, Asian needle ants, and more.

Fortunately, one of the great things about being at an institution that values science where people live, a land-grant institution with a commitment to public science, is that people have been keeping an eye on the life around campus for a while; this extends to the ants. In the late 1970s, T.P. Nuhn, then a graduate student, surveyed the campus for ants. 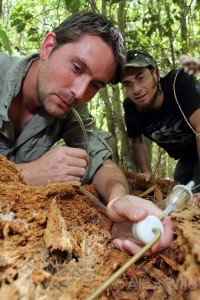 In light of this earlier survey and his deep and emotional love for ants, Benoit Guénard (at the time a student in my lab, now a faculty member at the University of Hong Kong) decided to figure out what effect the intervening 40 years of urbanization, warming, and invasion had had on the ants of the campus. Benoit repeated Nuhn’s survey, as best as he could and then added to Nuhn’s approach his own preferred means. Benoit’s resurvey took years and involved contributions from many NCSU undergraduate students, including Adrianna Cardinal-De Casas who ran all over campus putting out baits and ignoring the people who walked over them while watching, intently, for ants.

The first thing Benoit found, with the help of Adrianna and other folks, was that the campus was incredibly diverse. It included 89 species of ants, the highest diversity of ants recorded, as of yet, in a city anywhere in the world, with the exception of one study in Bogor Indonesia. Manhattan may have a higher cultural diversity than Raleigh, but when it comes to the civilizations of ants, New York City is, relatively speaking, a wasteland.

But there was more, Benoit also found that nearly all of the species that were recorded on campus in the 1970s were still around. They had survived all the change. They are now accompanied by introduced species from around the world, as well as some native species that have either newly arrived from within the region or were missed in the 1970s and yet they remain. Some seem rarer, some more common, but basically they are all there.

If you like ants, this then is that rare good news story in conservation, a story of persistence. And among the species that have persisted are rare and unusual forms, including species that eat only spider eggs, species that eat only centipedes, army ants, slave-making ants, species that disperse seeds and much more. On campus dwell as many mysteries as North Carolina State University has undergraduate students, mysteries that those undergraduate students continue to help us to explore. Why? Because we find ants fascinating, beautiful, and mysterious, but also because we can learn from the ants. Go to the ant, thou Wolfpack student; you don’t have to go far. And increasingly what we learn from the ants is proving useful. Ants have recently been used as models for battle, highways, decision-making, building construction and much more. They have been used successfully and to great economic benefit. But, of course, they can only be used once they are studied and North Carolina State’s campus, well, it implores us to explore. Where better to do so, after all, than the most diverse campus in North America (second in the world only to Bogor).

Want to dive into the results of Benoit’s study of the ants of NC State? Check out the research, recently published in the journal, Urban Ecosystems: