7 cool facts about drain flies and their kin

Over the last few days, we’ve received a few notes and photos (see above) from folks describing fuzzy, moth-like flies flitting about their kitchen or bathroom. So we turned to our favorite bug guru, Matt Bertone, for the inside scoop:

1. Flies in the family Psychodidae (particularly the subfamily Psychodinae) are often called moth flies or drain flies. The former name comes from the covering of hairs and scale-like hairs that give these flies the appearance of a fuzzy little moth (which can be confusing to non-entomologists). The latter name comes from one of their most familiar habitats – inside the gunk-filled plumbing of our bathrooms and kitchens. Yum!

2. Moth flies are also commonly found out in nature. Most require very moist places to live, like damp leaf litter or standing pools of water. Their favorite habitats include compost piles (where they can also frequently encounter humans), water bodies formed by terrestrial plants (called phytotelmata) that include treeholes and bromeliads, dung, large bodies of water and other moist situations where organic matter builds up.

3. So what are they doing? Moth fly larvae feed on decaying matter and bits of organic debris. Like many true flies, they can be important decomposers. You can even think of them as your own little plumbers, slowly feeding on the organic buildup in your pipes. A mucky job but someone has to do it – and I think they enjoy it! Adult moth flies generally do not feed, but may munch on bits of organic matter or visit flowers. 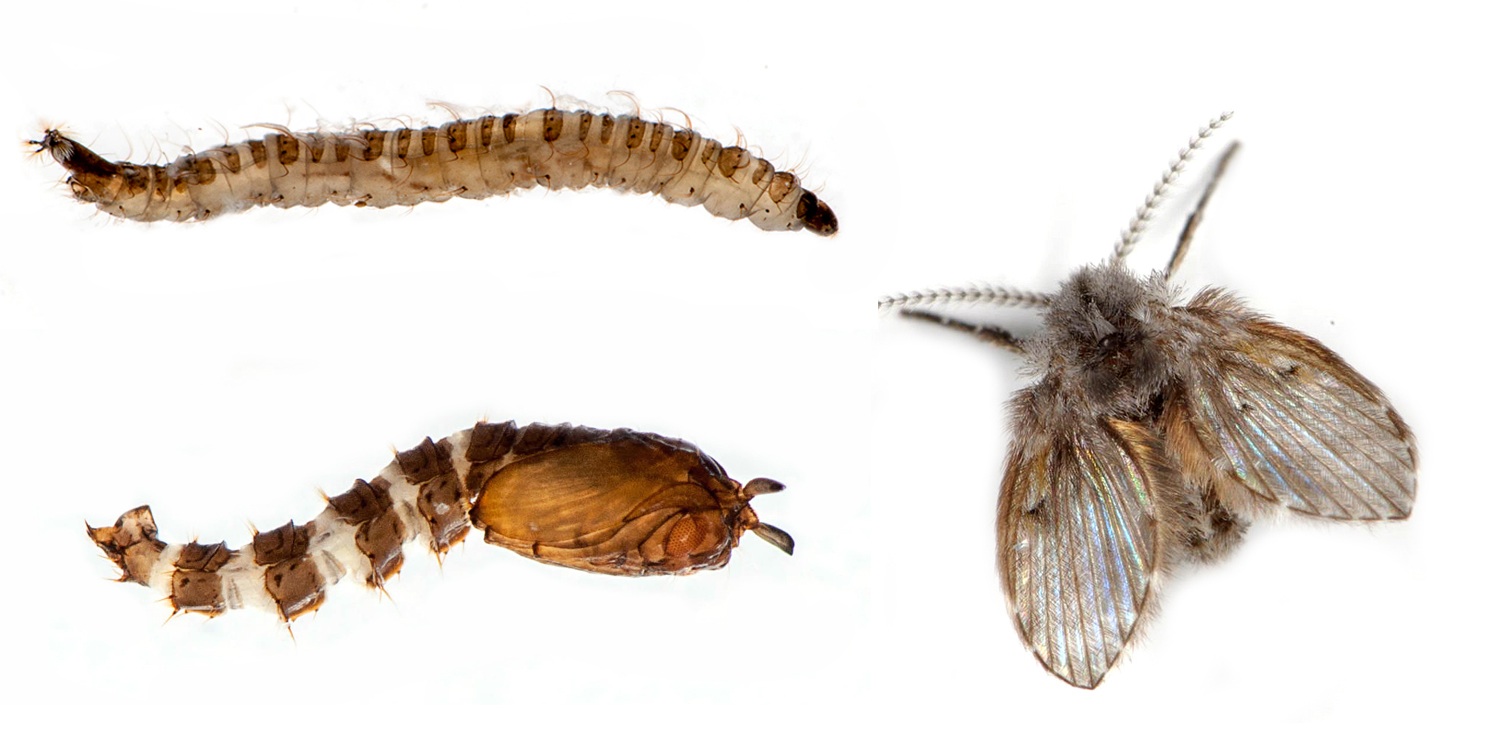 4. The family Psychodidae is much more diverse than just our typical drain flies. In fact, there are over 3,000 species known in the world and likely many more to be discovered and described. Members of some groups (e.g. Maruina) have larvae that have suction cups on their belly that help them attach to rocks in streams and waterfalls. Other larvae (Trichomyia and others) are more worm-like and live in rotting wood. Adult females of some species in the subfamily Sycoracinae feed on the blood of frogs!

5. Speaking of blood feeding…some members of the family Psychodidae are among the most medically important insects on the planet. Females of the subfamily Phlebotominae, commonly called sand flies, are vicious blood feeders where they occur. Their bites are sometimes painful, but it is the many diseases that they transmit that are of greatest concern. Among them, leishmaniasis (caused by the protozoan genus Leishmania), bartonellosis (caused by Bartonella bacteria) and Pappataci fever (cause by a virus) are the most severe, with leishmaniasis infecting millions of people and causing 20-50,000 deaths per year. These flies, and their diseases, are of most concern in tropical and arid regions of the world.

6. Evolutionarily speaking, moth flies and their kin are a very old group and related to some very interesting flies. Fossil Psychodidae date back to the late Triassic/early Jurassic, which means they were around when the earliest dinosaurs were alive (even before Stegosaurus and most other familiar species). In recent years, molecular research to construct the family tree of the more primitive flies has placed the moth flies with a short list of odd fly relatives. Their closest relatives are the enigmatic primitive crane flies (Tanyderidae), which do not at all resemble their small hairy cousins. However, back in prehistoric times, both groups looked very similar and fossils of some flies have not been able to be reliably assigned to either family. Sister to these two families are the equally amazing and obscure-to-the-public Blephariceridae (which I could spend a day talking about!).

7. Lastly, I think moth flies (with the exception of their vicious, biting sand fly relatives) are pretty adorable…maybe next time you see one flitting about your drain, you’ll pause in admiration!

About the Author: Matt Bertone