The Tip of the Gutberg: The World’s First Map of the Patina of Feces

If one tells the story of the history of the Earth from the perspective of microbes, one of the great leaps forward was the evolution of animals with guts. From the microbial perspective, animals are wondrous contrivances that evolved for carrying their habitat, the gut, from one patch of food to another and keeping it safe.

Guts are predictably full of food and, even when they are not, all one has to do is wait. They are also constant in their pH and other conditions. They are the perfect world inside a world. Many of the most successful microbes on Earth depend on guts for survival (or, if you want to return to the vertebrate perspective for a moment, many animals with guts depend on those same microbes).

Mostly, the world of guts is invisible. What we do see is the tip of the gutberg, those organisms that have, however unintentionally, left the gut. Some gut-dwellers have evolved sophisticated adaptations for leaving the gut they are in and then, once again, finding a new gut. Pinworms, for instance, migrate to the anuses of children where they cause the sensation of itching, which causes the children to scratch, which then allows the worms to pass on that child’s finger to some other child. But most gut-dwellers leave the gut only accidentally; leaving the gut is like falling off of a building. If you get lucky you might survive, but you would rather not fall in the first place.

Yet it is among the fallen microbes in feces that we most often encounter gut-dwellers, so many of them that they are all around us wherever we go, evidence of a hidden empire. Stanley Falkow once, somewhat famously, said (at least famously among microbiologists) that the world is covered in a thin patina of fecal microbes. This sounds gross and untrue, but it was, on the basis of what Falkow knew, a reasonable guess as to the composition of the layer of life all around us. But a guess is a guess, or it was until now. Finally, on the basis of samples from across the United States, we can actually test whether a thin layer of fecal microbes covers everything. Is each thing you touch really coated in microbes that once made their living in the lower intestine of some other being? I would have guessed that Falkow overstated his case; it was a good line, but surely not true in the absolute.

The answer is best portrayed as a map in which we show the relative abundance of gut-dwelling microbes in samples from the outer door frames of roughly 1000 houses across the United States. Each dot is a sample. The browner the dot, the higher the proportion of microbes in that sample that are known to be gut-dwellers. Clearly, there are mysteries in this map. Why, for instance, is north Texas so shitty? But why also is everyplace else at least a little shitty? Nearly every sample we considered contained evidence of gut-dwelling microbes which is to say, just as the pollen of plant sex coats our lives in the spring, the cells of the gut world coat it every day. 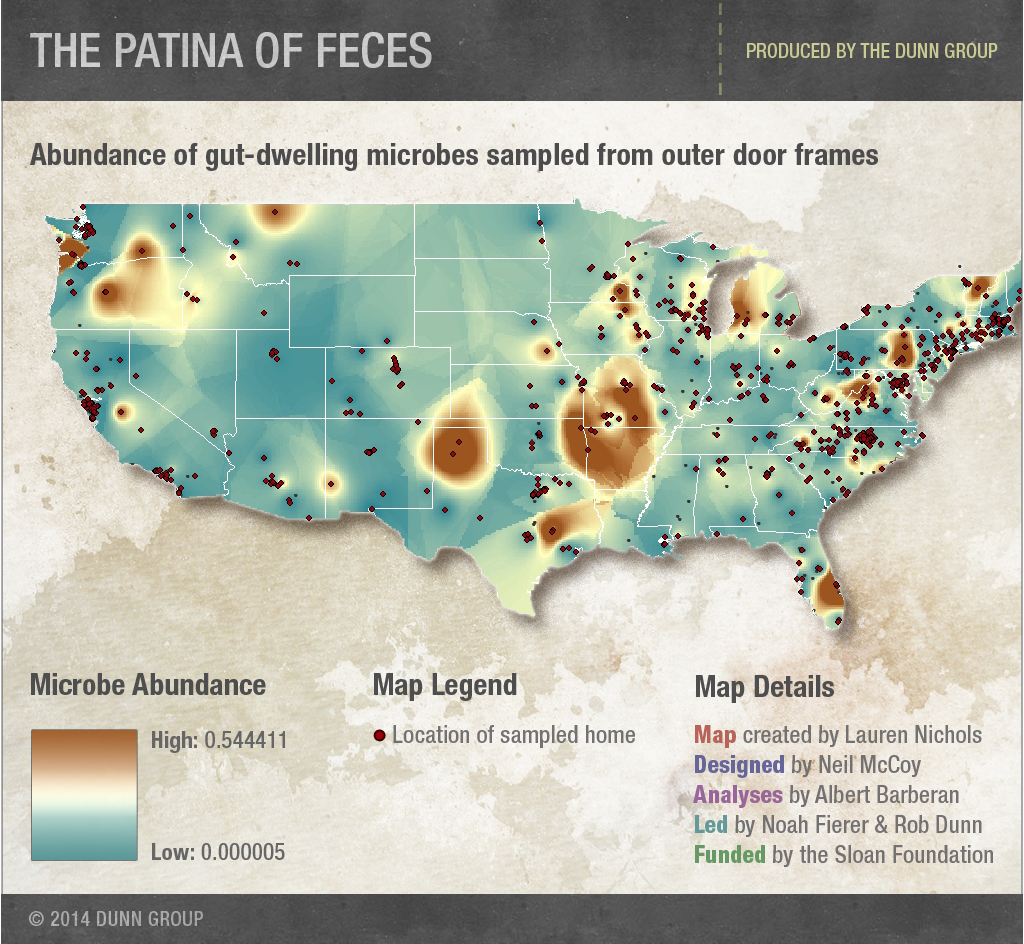 The next question is where this feces comes from. Some is surely human, much of it though might come from pigs, cows, chickens, squirrels or who knows what else. We don’t know yet. What we do know is that all around us, even on the tops of doors and presumably all over our houses, is evidence of one the largest biomes on Earth, the gut, a biome distributed among all the flying, walking, pooping vertebrates, a biome whose evidence really is a patina, some places thicker, some thinner, but everywhere, every day. It is the patina of success, the success of animals, if that is your point of view, or perhaps more accurately, of microbes, those beasts who evolved to take rides all around the world, in guts.