The Giant Wild Life of our Giant Backyards

Today we’re serving up an elephant double-feature. Click on over to Buzz Hoot Roar to get your second helping of pachyderms.

Last week, I woke up in the middle of the night and couldn’t get back to sleep. After several unsuccessful attempts to rouse every animal and human in my house for company, I stared out the back window into my moonlit yard. There, creeping through the branches of our sycamore tree was a fat, wiry raccoon.

I caught my breath. He was beautiful. His fur silvery in the moonlight, he humped his bandit’s body from limb to trunk to limb, his person paws testing, touching, scratching and turning over. He was somehow graceful, slick and scrappy all at once. And he was other than I, separate from me out there, on the other side of the pane, moving from moonlight to the darkness and shadows I wouldn’t explore in my bare feet from my kitchen floor.

Last week, Ganesh and Rahul also woke up in the middle of the night, just like me. They saw something wild and beautiful moving in the yard, just like I did. But what they saw was not other, could not be separated from them by panes of glass and sturdy walls. What they saw was terrifying. They knew the chilling potential of a five ton Asian elephant bull creeping almost noiselessly on padded feet through their backyard. They knew that bull might let himself inside the house, smash the walls, steal their food, trample their possessions, or worse, crush them or their family members.

Ganesh and Rahul live in Udalguri District of Assam, India, at the very edge of the country of Bhutan, where Indian plain abruptly meets the Himalayan mountains, somewhere between Bangladesh and Tibet. Asian elephants here migrate with the seasons, following a path of crops and rains. This time of year they make their way down to India, then make their way back to Bhutan each December. A few lone bulls remain amongst the villages of Assam year-round, perhaps tempted to raid homes of their stored harvests instead of expending energy following the herds.

Years ago, when roads and cities didn’t spread out quite so far in their amoeba-like fashion, Asian elephants journeyed through the forests and plains relatively undisturbed, revered by their human cohabitants, doing their elephant job for the environment, distributing seeds, bringing sunlight into forests by pruning and helping regenerate trees. But today, with an increased human population driving a need for larger cities and more agricultural fields, people and elephants find themselves on opposite sides of a conflict that can turn deadly. 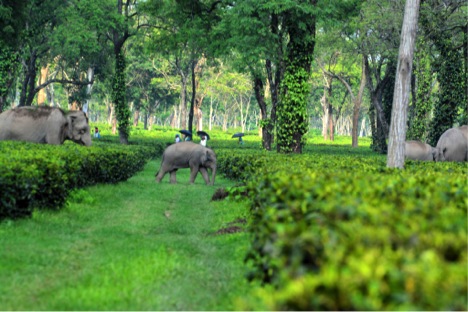 Last year alone, in Udalguri District, an area approximately the size of Wake County, North Carolina, Asian elephants killed 19 humans, according to NCSU outreach specialist Lisa Mills. “A bump from an elephant’s trunk can be enough to kill a person if the elephant is upset enough,” she says, adding that people aren’t the only ones in danger. “It’s important to note that 11 elephants also died in Udalguri District alone from human-related causes last year.”

Lisa understands this battle. She knows the stories of families devastated by elephant destruction, who’ve lost homes and crops and family members to those huge appetites, heavy steps, and powerful trunks. But she also knows the 250-450 elephants estimated in this transboundary area struggle for survival in a rapidly changing world. Lisa works to help both sides. It all starts with local community members, aka “citizen scientists,” and getting to know your neighbors.

Lisa co-founded Elephants on the Line, a project devoted to repairing elephant/human relationships and conserving the rapidly declining Asian elephant populations. “Habitat loss is a driving force of elephant/human conflict, and, living in Bhutan, I realized we could make a real difference here for humans and elephants,” Lisa says.

Lisa’s team brings life-saving educational resources to Bhutanese and Indian people living in Asian elephants’ paths. “We have these ‘Elephant’s Trunk’ kits, with lessons and photos of individual elephants who move through the area,” Lisa says. “We don’t know a lot of information about these elephants, like exactly how many there are and their exact land use patterns. With the kits, children can begin to identify individual elephants from key features like a broken tusk or ear tear, and the importance of sharing information about the elephants that visit the areas near where they live.”

By getting to know the elephants’ habits, researchers and citizens can begin to make predictions about elephants’ movements, which will help with land conservation efforts and educating people about how to coexist more peacefully with elephants. She’s also helping people understand basic facts about elephants, like how much they eat and how to plant elephant-friendly plants that may prevent them from scarfing down people-valuable crops and reduce deadly farmer/elephant interactions.

Mills also uses social media to facilitate elephant-sighting discussions. “We want children in India to talk to children in Bhutan about what they see. There’s so much we still don’t know here, so much the people who live with elephants can help us discover about them. Elephant populations are at serious risk. That’s why it’s important for this work to happen right now, before it’s too late.”

Soon after Ganesh and Rahul saw that elephant in the backyard, word about the encounter spread through Facebook and a discussion followed about not getting too close to or chasing the elephant. Mills says discussions like these won’t wipe away all of the human/elephant conflict, but they can change the dynamic. “Yes, there will be crops eaten and damage done, but keeping things calm and making sure people are aware of their presence can make the difference between life and death,” she says. “Given proper guidance and information, people can wipe away the battle lines.”

Check out the Elephants on the Line program on their NCSU College of Natural Resources website at http://cnr.ncsu.edu/sites/elephantsontheline/. Here you will find news of the latest elephant sightings by citizen scientists, links to The Elephant’s Trunk and other K-12 learning resources, and information on how you can help Asian elephants.