Your House is Full of Flies

Today we have a guest post from Dr. Michelle Trautwein, the investigator-in-chief for the Arthropods of Our Homes project. Two years have gone by since our team of entomologists poked around the light fixtures and floorboards of 50 homes in the greater Raleigh area, but we think it’s been worth the wait. Below Michelle reveals some of the findings, now that we have (FINALLY) finished identifying all of the arthropod specimens collected.

In my bathroom right now there is a spider under a glass jar. He is one of the lucky ones. I operate a spider relocation program, so generally the ones I find in my house make it out alive. Roaches and flies aren’t always as fortunate. I’m sure you can relate.

Even as an entomologist (and thus a lover of bugs), I have mixed feelings about the insects and their relatives that live in my house. Yet, arthropods have been living and evolving with us for ages. Their omnipresence is an unavoidable truth.

Certain insects cause us more consternation than others. As humans we are particularly averse to the ones that bite, sting, eat our food or even worse — eat our houses. Scientists research and homeowners spend money to get rid of fleas, roaches, and termites. But what about the many, many other species that live in our houses? Or perhaps you didn’t realize there were many, many others?

The inside of your house may not seem like the type of place where intrepid explorers go to make great discoveries, but the truth is that these common indoor spaces are relatively new ecosystems, evolutionarily speaking. Humans have only been building houses for about 20,000 years — and there is still much to be learned about both the microscopic and macroscopic life in houses.

A couple of summers ago, a team of Your Wild Life entomologists scoured 50 houses in the Raleigh-Durham area to explore the diversity of arthropods dwelling within. We brought back over 10,000 specimens to the lab and over the course of a year and half, have identified about 750 species from these rich, domestic habitats. With more than a million described species of insects known to science, this was no small task. Though we are still working through our final analyses to understand more about who is living in your house and why, I want to share a glimpse of our fun discoveries thus far: 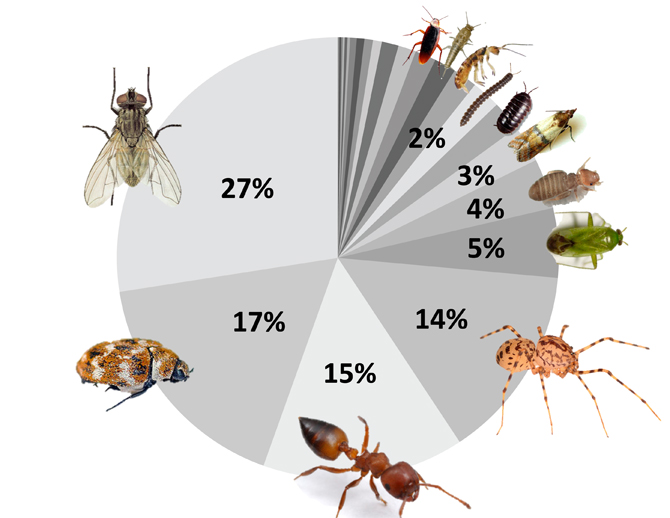 The relative abundance of different kinds of arthropods we collected across 50 Raleigh-area homes in the summer of 2012. Amongst the 10,000 arthropod specimens we collected and identified, flies, beetles, ants and spiders dominate the communities of creepy crawlers in houses.

There are many mysteries to be uncovered as we learn more about the cryptic life of your quiet, many-legged roommates. We’ll keep you updated as our analyses move along. In the meantime, do visit the Arthropods of Our Homes photo gallery, carefully curated by team member and photographer, Matt Bertone.

Finally, a big THANK YOU to the 50 households who opened your doors (and basements and light fixtures) to us. We couldn’t have done this work without you and we are grateful to have you along on this journey of discovery! Keep an eye on your Inbox as we’re emailing individual home reports to all Arthropods of Our Homes participants later this week!