Amy Savage’s Take on Ants in the Big City

New York City: “the City of Ants.” Most of us wouldn’t describe the Big Apple that way. But Amy Savage has news for you.

For the last two years, Amy has crawled through New York City’s nooks and crannies, peering behind garbage cans and between sidewalk cracks, combing through the city parks’ grasses and checking out trees, getting an “ant’s-eye view” of the most peopled city in the United States. She found that right in New York City lies a metropolis of ants, with its own networks and freeways, apartments and giant buildings.

Here, Amy gives us the scoop on the secret anty city woven around New Yorkers.

Interesting. So did you see as many ants living in super-urban habitats like street medians as you did in areas where we’d expect a lot of ants, like in more natural areas like forests or parks?

No. About half of the ants that we collected in parks and forests were completely absent from street medians, and forests had the highest number of unique species.

Did any ant species you found in your survey surprise you?

We found two ant species that we did not know lived in New York City. One of these species, Nylanderia flavipes, was one of the most common ants collected during our surveys. It’s fascinating to think that such a common species was previously unnoticed. It’s just one example of how little we know about the species that live in close proximity to humans!

I was also really surprised by how many native species were found, even in the most urban city in the USA.

Which was your favorite ant species found in the survey?

If pressed, I’d have to pick pavement ants (Tetramorium sp.E). When you look at these ants under the microscope, their heads are—literally—groovy! They are elegant too. Also, even though pavement ants have been in North America since at least 1895, we know almost nothing about their biology!

Once you figured out who was living there, you then became something of an ant cafeteria lady. Tell us what you did to figure out what ants are eating.

We gave ants living in parks and street medians a smorgasbord of different foods, like olive oil and sugar water, to understand how they eat.

What did you find out?

We saw something really cool when we did that. We saw ant food preferences shifted from sugar water in parks to olive oil in medians—even within the same species! Most of the fat in ant diets comes from other bugs. In the most urban areas like street medians, a lot of the bugs that ants eat can’t survive. Because of this, we think that ants in the most urban environments are “fat-starved.”

What else are you learning about New York City’s ants?

When Superstorm Sandy struck New York City, many habitats were totally changed. They were submerged in salt water; strong winds knocked down trees; and clean-up efforts disturbed habitats of ground-dwelling animals, like ants.

We set up study sites across Manhattan to check out how these changes brought on by Sandy affected the diversity of organisms in Sandy-stricken areas. We’ll have a lot to report on that soon as well!

What is the most exciting thing about studying ants in New York City?

I think we often have this idea that ecology just happens in nature preserves and remote tropical forests. However, it is also exciting to think about the ecology underfoot. I am fascinated by the interactions between humans and the species that live around us. These species are both most likely to affect humans and to be affected by us. 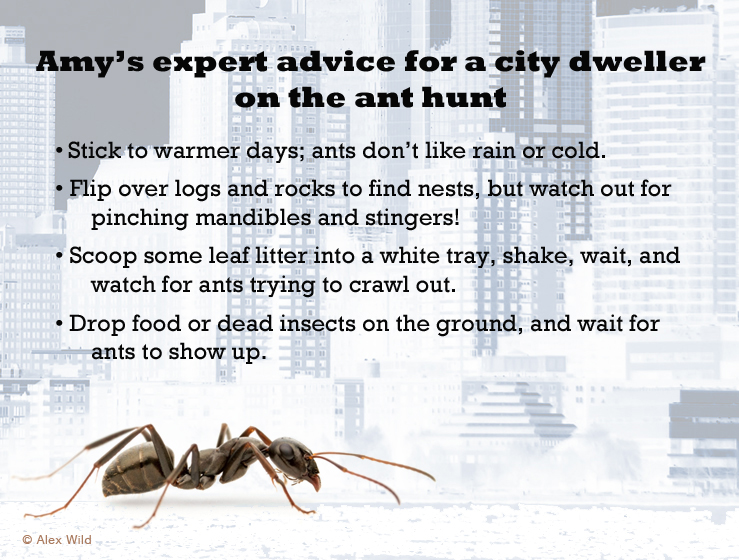