Meet the Worker Bees: Q & A with Joe Karlik

Our lab has been buzzing with research activity this summer. We thought it would be fun to sit down with a few of the worker bees — undergraduates, high school interns, and research technicians — to ask them some questions and learn more about their work. 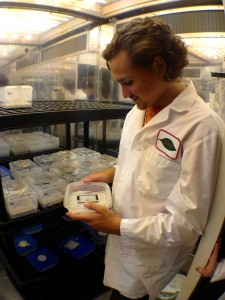 Joe checking on the Temnothorax colonies, housed at the NC State phytotron.

Joe has been involved in field and lab work ranging from the construction of ant colony nest boxes to the collection, feeding, counting and monitoring of ant individuals from 6 different species.

Describe your project/research: I am working on a project studying how temperature variation affects the health and success of ants from colonies that were collected both locally and along varying geographic locations from the eastern US coast. We are currently measuring individual survivorship and the time required for development, both in terms of initial egg production, as well as the rate at which the ants progress through each subsequent stage of development. The majority of our colonies are housed in an indoor, highly controlled greenhouse, known as the NC State phytotron. We hope to compare these data to how species are responding in their natural environments and also to colonies that are found at one of our long-term research sites, where we have several warming chambers installed at Duke Forest.

How many ant colonies are you and your lab mates currently maintaining?: There are 194 in the phytotron and 80 in the lab, not counting the Pachycondyla chinensis (Asian needle ant) colonies.

Which species of ant is your favorite?: Temnothorax – The fact that the entire colony lives in one acorn or nut is incredible. Plus, they are easy to manipulate and hardy, all while being fun to work with and easy to collect.

How has working with these ants inspired you?: I am starting a project focusing in on Temnothorax: It has been observed that these ants stick their brood to the ceiling of the nut in which it lives. I am very interested in thinking about why this behavior occurs. There are a few hypotheses I am considering, but I am still in the initial stages of the project. I am working now to figuring out ways in which to modify the nut so that I can open and then replace a portion for easy monitoring.

Where do you find your Temnothorax nuts?: I have been collecting my colonies mostly from hickory nuts; however, my dad collects and paints acorns, so I have tapped into his collection for testing out manipulation methods. (It turns out more often than not, they are painted as pumpkins and zombies!)

What is it about ants that gets you so excited?: I find the social organization of the colony (called eusociality) fascinating.

Joe sorting through wood in search of ants!

Describe your biggest problem solving moment: Feeding the ants and keeping them alive has been a challenge. It took a while to figure out how to keep them from drowning and what their preferred feeding pattern was – which happens to be no pattern and that they love new food choices.

What do you listen to in the lab?: I listen to lectures on audiobooks. I just finished learning about Egypt, and I am currently listening to a book about the Crusades. Akhenaten is my favorite pharaoh, and the 4th is my favorite Crusade.

What do you like to do outside of your scientific endeavors?:  I like to read and write. I am reading a number of books, ranging from textbooks to the “A Song of Ice and Fire” series and I am ~1/3 of the way through writing my own novel. (starring aliens!)

About the Author: Megan Thoemmes