How Many Ants Live in New York City?

Every so often for the last ten years, one of my collaborators, students or I could be seen standing in a median on Broadway, bending over, looking at ants. We looked at the ants, and the people of New York, as is the custom, tried hard to avoid looking at us.  Every so often someone, perhaps an immigrant new to the city and unfamiliar with the rules about eye contact, would give in to temptation and ask, “What are you doing?” We would usually say, “studying ants,” though I will confess that sometimes it was just easier to pretend to be crazy.1.

Image 1. A queen of one of the most common ants in New York, a species that still lacks a scientific species name, Tetramorium species E. Photo by Alex Wild.

In this scene, the sense is of a metropolis—the triumph of humanity and engineering—within which we were studying a small silly vestige of wild nature. We were the quirky biologists who failed to look up at the grandeur of what New Yorkers have made. But is this perspective right? Whose city is it really? How many ants are there in New York? The math is simple enough. We know from work that Britne Hackett and Benoit Guenard began (and Amy Savage is following up upon) that in a sample of one square meter of leaf litter there are about fifty ants, a village. Slightly more in the parks, slightly fewer in more stressed environments such as medians. But fifty is a good round starting place.

Now, how much green space is there in the city? We found one set of land use tables in which “open space” is a measure of part of the green space in the city; it does not include small patches of green such as medians or privately owned abandoned lots, but it is a starting point. If we multiply the number of ants in a square meter by the number of square meters in each borough and then double our estimate (to very conservatively account for the ants under ground at any moment) we get the following…

Table 1. Crude estimates of the number of adult ants in the open spaces of New York City boroughs.

These are, needless to say, big numbers. We have made a bunch of assumptions with this simple math, but the one most likely to be wrong seems to be the assumption that there are no ants in the places that are not green. Ants sometimes make it into apartments in New York (though the ants of New York City apartments have never been studied). At least three ant species, the cornfield ant (Lasius neoniger), the pavement ant (Tetramorium species E) and Monomorium minimum can nest under cement. Just how many of these ants are under cement is something you can guess at as well as I can, but whatever the number it would increase our estimate of the number of ants in New York by at least a billion and maybe much more. Nor do we consider the species that nest up in trees, species such as Camponotus pennsylvannicus. We have also not included baby ants, eggs, larvae and cocoons. Including their numbers would probably about double the number of ants in the city overall. Amazingly, because the estimates in Table 1 are so high it means that even some of the very rare ants in New York City, species that no one has ever studied and that we know essentially nothing about, may be more common than human New Yorkers. 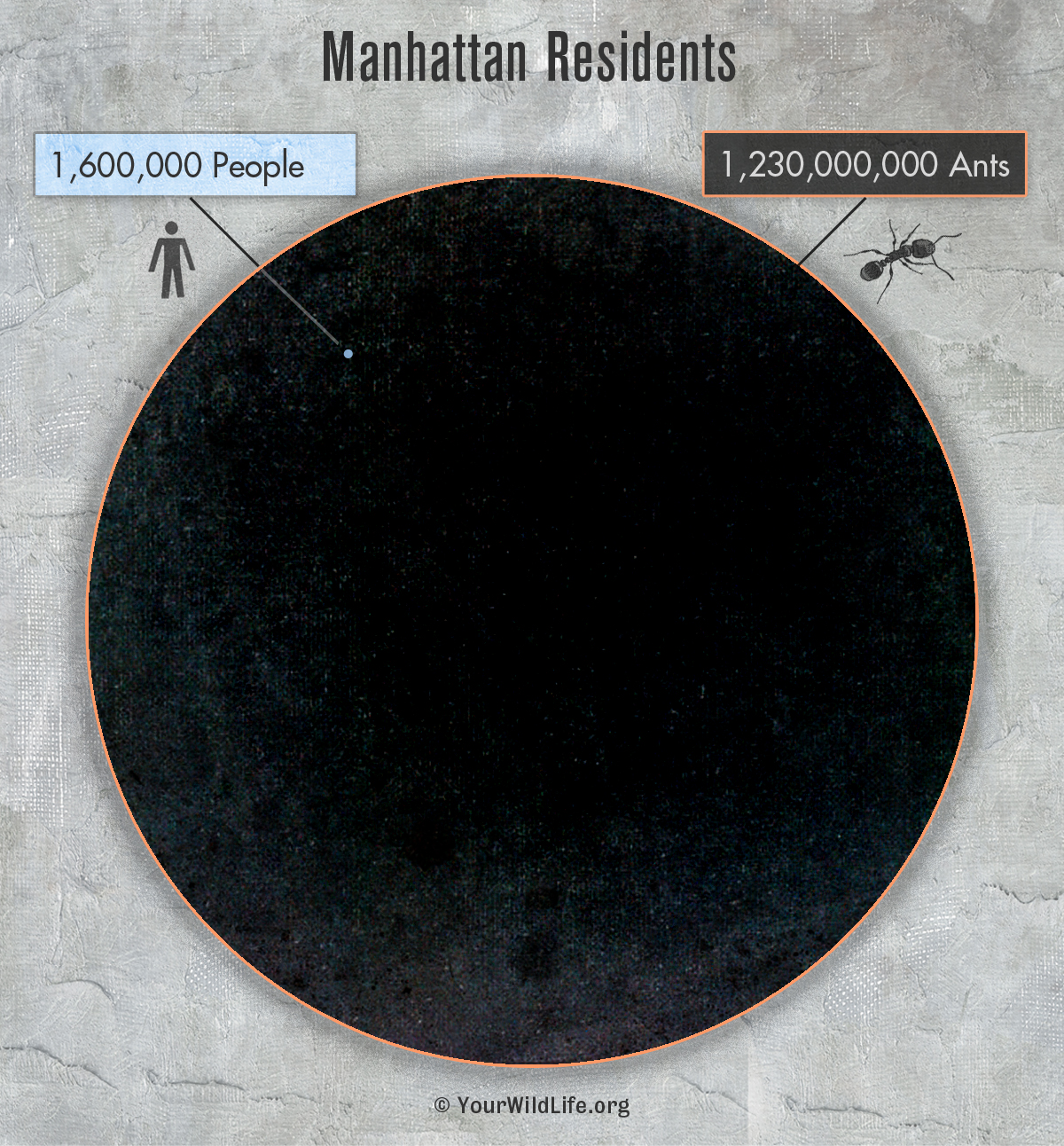 When compared to the ants, humans are a small dot in a big universe of New York’s life. But it is not the ants alone that outnumber us. There are probably more springtails in New York than ants and, I am guessing, you have not even heard of a spring tail (Google them, but suffice it to say it is an animal that rides a pogo stick). This is not to mention the tiny but trillions and trillions of microbial cells. This is not to mention most of New York’s life. I think it was Carl Sagan who said that entomology “is a humbling and character building experience.” Or maybe he said astronomy, but the sentiment holds, even in New York.

To be continued… (In the next weeks, we will continue these estimates and consider other comparisons between the human and other societies of New York).

For more about the ants of New York and everywhere else in the U.S., see Dr. Eleanor’s (FREE) Book of Common Ants.

Note to ant biologists…. If you have better estimates than we do for the numbers of ants in New York, better ways of approaching the question, etc… , let us know and we will update our numbers in real time or provide a range of approaches. The samples we used to estimate the number of ants in a meter square of litter were winkler samples.

1-This project builds on the work of Marko Pecaravic. Marko was a master’s student with my friend James Danoff-Burg, who I have worked with since I was 19 years old. Marko worked with James to sample and study the medians of New York and published the first paper on the life in New York medians, Biodiversity on Broadway.