Back to School: Undergraduates and Ants move in this week! 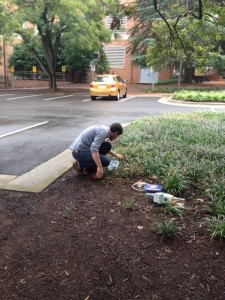 It’s move-in week at NC State and undergraduates toting laundry baskets full of lamps and bedding aren’t the only thing moving into campus; the ants are getting pretty comfortable too! Standing and staring at the ground I noticed ants carrying brood (eggs, larvae and pupae) in a long thick line across the mulch next to our building and up a tree – it was incredible to see them in such high numbers busily going about their day. It was as if they were doing their own “move-in” march with all of their precious cargo hoisted above their heads. I alerted Clint Penick , who I knew needed some ants for the work he and his undergraduates, Mary and Joe, are doing in the Phytotron on campus.

He came downstairs with a bug vacuum and a plastic container ready to collect.

It turns out that these ants were the very ants, Tapinoma sessile (the Odorous House Ant), that he and his colleagues had been searching for – and they had seemingly disappeared from their “typical” nesting spots, around everyone’s homes. Several queens climbed up the tree as well – this colony was undertaking a serious relocation. These ants are typically associated with houses and live a somewhat “trampy” lifestyle – picking up and moving at a moment’s notice. While they are native species to the area, they live like an invasive – multiple queens, they move their nests and even nest in places of refuse, like trash cans. They look almost identical to the invasive Argentine Ant, but you can tell the difference under the scope – they even nest similarly, but they are native. Interestingly, like most ants in the subfamily Dolichoderinae, they smell like blue cheese when you squish them. Historically, we haven’t collected them in the medians in New York City. For whatever reason, they aren’t common in the medians, but they are common in the natural park sites – a mystery yet to be resolved!

As Clint vacuumed the ants up it was easy to make a parallel to the freshman moving into the dorms a hundred yards from us. Eager, optimistic, quickly making new friends and connections – figuring out how to live in a totally new environment; be it a tree or a double-capacity dorm room.

On my walk home I could hear the fire alarms going off and see the freshmen all outside, sizing each other up. The guys were sharing sideways glances as they stood with their arms crossed; as if this was “normal” and they were just waiting to get back to their rooms, with a slight variation in their day. The girls were busily grouped on the steps of the parking structure, some with towels around their hair from an interrupted grooming session, others reading a book, but all quietly observing their new nest mates.

Best of luck to everyone headed back to school this week!