Hey Everybody! Meet Lea Shell, our new Research Assistant, who recently joined the Your Wild Life team. Lea will be taking charge of the Camel Cricket Project, working on School of Ants, and translating the science we do in the lab into science we can do in a classroom. Below is Lea’s first post on the YWL Blog – Please welcome her! ~ Holly 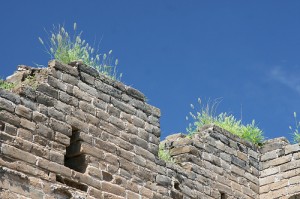 Take a look around you right now. Are you in a room with any windows? Are your walls solid? How many people have you interacted with today? I don’t mean to depress you, I’m just curious about your world… and if your world includes insects. Who (or what) inspired you to do what you’re doing right now? Educators largely influenced my fascination with insects. Their enthusiasm for the alien world of entomology rubbed off on me, like a contagion. My interest in the insect world solidified when I walked into the dynamic Entomology lecture hall at UC Davis where Dr. Harry Kaya thrust a Tupperware of the biggest, most beautiful, grasshoppers I’d ever seen into my hands as I entered the door. The clear passion of my Entomology professors led me to a life dedicated to both education and entomology. I quickly learned that the more we truly know and understand the less we have to fear about these amazing six-legged animals.

During my undergraduate career I spent more than enough time staring into a microscope or sweep netting a field. That was my life as an Entomology major, take a class, learn a ton, make a collection. And repeat quarter after quarter. After I learned to pin bugs and use a key, I got to work in a wonderful lab where I was allowed to ask questions and even collaborate on projects. It was eye-opening that I could influence the questions that were asked and the process that we took to answer them… I was doing science. But there was something frustrating: it seemed that beyond the solid walls of my lab, no one knew what cool things we were seeing under the microscope, nor did we seem to think they cared. What we were researching was very important, do not get me wrong, but it didn’t elicit the excitement inside of me that I had when I stepped into an elementary school classroom and held a giant hissing cockroach in my hand. The awe and wonder wasn’t there for me as it once was, it had evolved into a desire to share this wonderful world of insects to the real influencers of the world: children. So I did what any self-respecting scientist with a passion for learning would do; I became a teacher.

Since then four simple words have been used to describe what I wanted to do with my life,

But that’s not where it started. First it was high school math, then it was a study skills course for undergraduates and then it was a reading class for college students. When I would get the rare chance to teach an insect lesson in a classroom, it was magical. We danced, we hissed like cockroaches, we played insect charades and imagined what life would be like if we could hear with our knees and smell with our antennae. There were no solid walls to keep the science away from the world and these growing minds. It was pure discovery, imagination and curiosity. I knew I needed to get back to science, but I didn’t want to spend my time staring at a solid wall where people would ask what I did for a living and then glaze over when I started to explain… so I started looking for a place where entomology research mingled with educational outreach. I remembered an email from a colleague asking for participants in something called “Citizen Science” – sounded like a place where I could fit in.

To make a long story slightly less long, I ended up connected with the Your Wild Life team (in fact, I officially started on the job last week!). It’s not often that a potential future employer asks you to describe your dream job and says, “That sounds like something we could do.” Is there a home for someone who likes blogging, taking pictures, coming up with obscure art-integrated-with-science lesson plans, and talking for hours on end about… insects?

How excited was I when I found out that this wonderful thing called “Citizen Science” was taking the educational and scientific community by a powerful and momentum-filled… swarm? Your Wild Life and other scientists worldwide are using the powers of social media and marketing to get citizens involved in big (real) science projects… it’s as if, finally, folks are beating the chalk dust out of their suede-elbow-patched corduroy jackets and getting Twitter handles and asking questions (and listening to the answers) and… adapting to change and embracing the power of crowd-sourcing science. 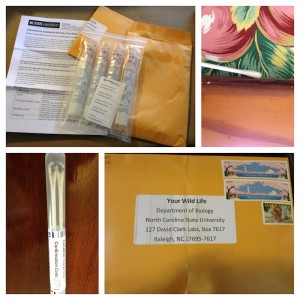 Well-before I arrived in Raleigh, I heard about the Wild Life of Our Homes project and jumped at the chance to partake in some citizen science. And then one day… my home sampling kit arrived… in all of its manila-encrusted glory. I couldn’t wait to tear it open and start swabbing my house! I filled out the questionnaire, got my Confirmation code… and off I went – following the simple step-by-step directions.

I was so excited to see a tweet a couple of days later that my package arrived safely back in Raleigh, in the capable hands of the Dunn Lab, along with several hundred other very similar (but hopefully very different!) packages. Those samples will soon be headed off to Colorado for analysis to identify the microbes. (Stay tuned for more on that in the upcoming months…)

I’ve always been a firm believer that science shouldn’t be practiced behind closed doors – it should be done out there in our world, with other people and beyond the walls of an often-windowless laboratory. It’s remarkable to be able to answer the question, “So what do you do?” with something like, “I get to teach kids (and adults) about bugs.” And, to that end, if you haven’t had the chance to check out the labs at the NC Museum of Natural Sciences’ Nature Research Center (home to many other Your Wild Life team members), you should! You’ll notice there are no solid walls surrounding the laboratories, but rather, glass. No secret science, it’s all on display for you to see, touch, experience, and even collaborate on; it’s called citizen science, and I hear it’s catching on. 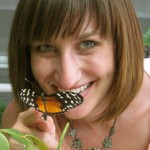 Lea Shell is YWL’s newest Research Assistant and will be taking charge of the Camel Cricket Project, working on School of Ants, and translating the science we do in the lab into science we can do in a classroom. She has a B.S. in Entomology from the University of California at Davis and a M.A. in Education from the Mississippi University for Women. Lea blogs (almost) daily at HoneyWithoutFlowers.com, thinks weekly at PhilosophyMatters.org, and can be found on Twitter at @VeganBugLady.