Putting the SCIENCE back into science fair projects 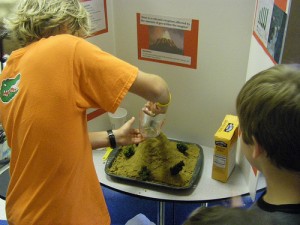 Every year, millions of children participate in science fairs. There are many values to science fairs, but one of them is the potential for students to do real science and, in doing so, make actual discoveries. We want the baking soda volcano to become a thing of the past.

We know real scientific discoveries are possible. Many examples exist. For instance, it was a science fair student named Sarah who discovered that Sahara dust ends up, some years, in Texas. E. O. Wilson and Merlin Tuttle both discovered new species (of ants and bats, respectively) when they were of science fair age.

So what are the barriers to having kids do real science? There are many, and unfortunately not all of them can be resolved in a Wednesday afternoon meeting, but we’re going to try. We’re hoping to solve at least one of the key barriers: finding a good idea for doing real science in the first place.

This Wednesday (yes, TOMORROW, November 14), we hope to bring together scientists from many fields, our creative colleagues, and collaborating citizen scientists to brainstorm a list of projects that are easy to do with limited technology but that might result in real scientific discoveries.

We’ll be be live tweeting it from @YourWild_Life using the hashtag #kidsdoscience so if you can’t participate in person, you can by tweet.

The fun starts at 3:30p EST – We’ll be meeting in person in Room 123 in David Clark Labs at North Carolina State University (Directions). Please come with some ideas for projects in hand and ready to go. We will begin with some discussion, but will then move quickly into free list mode.

And of course, feel free to get things started early in the blog’s comment thread and via Twitter.