**Today we have a guest post from Dr. Julie Horvath, Director of the Genomics & Microbiology Research Laboratory in the Nature Research Center, the new wing of the NC Museum of Natural Sciences.** 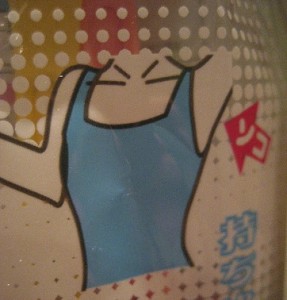 When I met Rob Dunn, I never dreamed I would be excited about starting a project where I was swabbing people’s or non-human primates’ armpits to collect their smelly microbes.  Yet today we are doing just that. When you pass by my Genomics & Microbiology Research Lab on the third floor of the Nature Research Center you’ll see a white board listing the members of the lab and what they work on. When you read that someone studies “armpit biodiversity” you might think to yourself, “Who drew the short straw on that research project?”  But soon you may start asking, “How do I get involved in that cool project?!”

We (the scientific community) have recently learned we have more microbial cells living on us and in us than human cells. There are pounds of bacteria living on our skin, in our guts, ears, and noses. Many of these bacteria are beneficial, and it is only occasionally that harmful bacteria cause problems. The Human Microbiome Project is working on characterizing all of the microbial species that live on and in us in order to better understand how we interact with and benefit from these microscopic travelers.

When talking about armpits, it turns out that it isn’t the person or animal that has an odor, it is the bacteria living on the person or animal that produces the odor. We know that people and animals choose mates based on smell, so we are actually basing some of our behaviors (e.g. mate choice) on these tiny microbes. This is intriguing since smell is also correlated with expression of some immune system genes. Therefore, investigating armpit microbes may be one way to connect particular gene sequences with behavior and mate choice. We’re interested in learning how people’s daily habits people influence the bacterial species hitchhiking on them. And longer term we plan to examine multiple non-human primate armpits for a comparison of the bacterial species living on them and us. 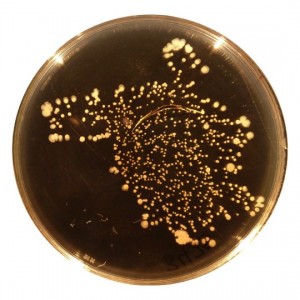 Here's a rich bacterial plate grown from a belly button swab. Mine was devoid of any bacteria.

Several months ago, a few of us in the Lab swabbed and plated our skin microbes, mostly to get a few pretty demo plates for the NRC Grand Opening. Our collaborator Rob Dunn and the Your Wild Life team had piqued our interest in their Belly Button Biodiversity project and so we swabbed both our belly buttons AND our armpits. Everyone’s plates had hundreds of bacterial colonies…except mine. Nothing grew on my belly button or armpit plates.  I thought to myself: “Is something wrong with me?” This is where most people would probably be happy that they didn’t have microbes growing on them, but as a scientist I was concerned that something was wrong with me. I went to my dermatologist shortly after the “no growth” incident, and I asked if I could have some skin problems because I didn’t have any microbes growing on my skin. He looked at me like I was crazy. So I set out to figure out what was causing no bacterial growth on my agar plates. In sampling more people we noticed that there were others who also failed to grow any bacteria on their armpit plates. In true science fashion, we started an experiment.

Let’s take one man (fellow co-worker) and one woman (me) who wear antiperspirant every day. Swab their pits and see if anything grows. Then tell them to stop wearing antiperspirant and swab them every day to see how long it takes for bacteria to grow. I did this for 5 days. And boy was it hard to go antiperspirant free for that long — especially on the days I had to talk to give public talks in the Daily Planet Theater. But weirdly enough, after about 5 days I got used to being antiperspirant free. So I continued the experiment until I got to 12 days sans antiperspirant. What we noticed was that I had very few bacterial colonies growing on plates from early samples, but as more days passed without antiperspirant, more bacteria started to grow on my plates. This suggested that antiperspirant inhibits bacterial growth. Unfortunately, my fellow co-worker joining me in this experiment did not see an even increase in his bacteria growing over time. And one can’t make any solid scientific conclusions from a sample size of two. We determined that we needed a larger study with more people and more consistent sampling. And so our pilot study begins….

Follow our experiment in-progress (as well as the trials and tribulations of the 18 volunteers we recruited to go without antiperspirant or deodorant for an entire week in the hot North Carolina summer!) here on the Your Wild Life blog and via Twitter (#PitStart). 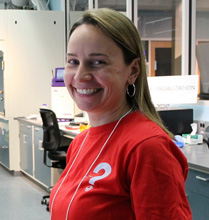 Dr. Julie Horvath is the Director of the Genomics & Microbiology Research Laboratory in the Nature Research Center, the new wing of the NC Museum of Natural Sciences.

The Armpit Project is a collaborative project involving Drs. Rob Dunn and Holly Menninger in the Biology Department at NC State University (Your Wild Life Program), Dr. Jul Urban, the Assistant Director of the Genomics & Microbiology Research Laboratory, and Dr. David Kroll, the Director of Science Communication at the Nature Research Center.