The science you don’t see 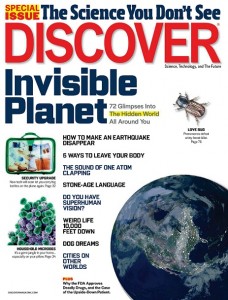 Hey, have you seen the July issue of Discover Magazine all about the Science You Don’t See? Perhaps, then, you saw the feature article on Earth’s last unexplored wilderness… indoor environments and the microbes that inhabit them!

We were thrilled that Discover highlighted the Wild Life of Our Homes project in a sidebar, “Mapping the Home’s Microbe Habitats.” In it, we share some early (and exciting) results from our project’s pilot study that looked closely at the microbes living on common surfaces in 40 homes in North Carolina.

We found that these homes harbored distinct habitats for microbes – that is, the microbial communities found on exterior door trim were quite consistently different from those living on the kitchen counters, pillowcases and television screens. Microbes living on exterior door trim tended to be more associated with species we find in soils whereas the pillowcase tended to be dominated by human-associated bacteria (of the skin and gut variety – go ahead and contemplate that for a sec). Kitchen counters were inhabited by microbes that are typically associated with produce. Yet despite some these consistent broad-scale patterns, we noticed some variation among homes, too. We’ll have a lot more to say about these results – including some thoughts on how and why variation exists among the same surfaces in different homes in the near future.

Speaking of the science you don’t see, there were some VERY IMPORTANT PEOPLE whose hard work remained hidden-from-view in the Discover piece. Noah Fierer and his lab group at the University of Colorado – Boulder, our co-investigators on the Wild Life of Our Homes project, have really done the heavy lift on genetic sequencing and identifying the microbes sampled from surfaces within homes. 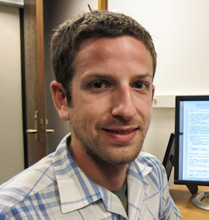 We thought we’d take the opportunity here on the blog to introduce you to some of the Colorado-based team doing the science you didn’t see in Discover. Meet Jon Leff: Fierer Lab research associate, microbe lover, and data enthusiast.

Tell us about yourself – Who are you? How did you come to study microbes living in build environments?

I am a research associate in Noah Fierer’s lab at the University of Colorado at Boulder. My background is in studying microorganisms in soil, but I recently became interested in studying microbes in built environments after joining the Fierer lab last year. Although seemingly unrelated, the techniques used to study microbial communities in either of these environments are very similar, and I really enjoy working with and thinking about microbes that I interact with on a daily basis.

What’s your role in the Wild Life of Our Homes project? Walk us through a Day in the Life of Jon in the Lab…

My primary role in the Wild Life of Our Homes project is to help turn sample swabs into useable information about the microbes living in participants’ homes. DNA from the microbes collected on the sample swabs contains information that allows us to identify those microbes, so our lab must first prepare a portion of this DNA to be sequenced. This process (which I am thankful to have help with) involves subjecting the swabs to chemical and heat treatments, which isolate and make many copies of the portion of DNA most relevant to us. The DNA is also labeled at a molecular scale so that we can identify where the samples’ individual molecules come from once they have been sequenced. The sequencing turns the DNA molecules into meaningful strings of code, which I then compare to a database to identify the microbes they originally came from. These data enable us to distinguish the microbes inhabiting pillowcases from those on kitchen counters, for instance. Lastly, I use statistics to compare the composition of microbial communities on the house surfaces and to assess whether individual variables in one’s home might be influencing those communities.

Are there some home microbes that just don’t want to cooperate with us, i.e. have you run into any trouble when it comes to sequencing certain surfaces in the home?

Surfaces with fewer microbes are generally more problematic since they have less DNA, and we see this with individual samples such as door handles, but so far, we have been able to conduct our assessments on at least some samples for each of the surfaces we’ve investigated.

You spend a lot of time diving deep into the sequence data from Wild Life of Our Homes – I think to most people it would look like alphabet soup. How do you make sense of the sequences and determine the identity of the microbes?

It’s true. The raw DNA sequence data can be daunting. Thankfully, Dr. Rob Knight’s lab, here at CU, has developed a number of computational tools that help me with the bulk of the data processing. These computer algorithms facilitate quality control and produce tables with the counts of microbial taxa found in particular samples. Dealing with these tables is much more manageable than the raw sequences (although still quite large). With them, I can investigate patterns among the microbial taxa and compare communities across sampling surfaces and homes.

Without giving away any punch lines, were there any results from the first rounds of sampling (the 40 homes in North Carolina) that really surprised you? Why?

In some respects, finding any patterns in our pilot study was somewhat unexpected given that only 40 homes were sampled from a wide array of home types. It was encouraging to be able see incredibly consistent differences in the microbes inhabiting different sampling locations across this relatively small set of homes. It was even more intriguing to detect the associations between other home variables and microbial community composition with this sampling effort when you consider all the unmeasured variables that differ among homes that we could not account for.

Finally, has all of this work on microbes living in and around our homes affected you in surprising ways? Any changes to your habits or routines as a result?

Good question. So far, this work has not led to any changes in my habits or routines at home, but it has made me more curious. Now, I am constantly wondering how my actions at home impact the microbes living around me.