Is that a milpa in a rice terrace?

In September, Dr. Lori Shapiro of The Great Pumpkin Project traveled to Vietnam in collaboration with Erik Delaquis of CIAT in Hanoi to characterize microbial communities of New World crop plants – focusing on cassava and pumpkin – that have been introduced to Asia. 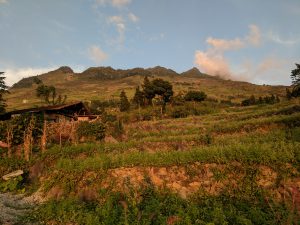 the open windows. Out those same windows, ancient rice terraces cultivated for thousands of years whizzed by, with the perfectly level cutouts making stairs climbing until the last bit of soil disappeared and the bare limestone mountain peaks began. 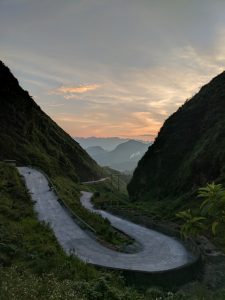 As the road began to wind through switchbacks on the way to the first pass, we began to discern more clearly what was outside our windows. We started to see large stands of cassava, planted into the steepest of slopes with no irrigation – marginal environments where many crop species often fail, but cassava can thrive. In many other places, the colors on the rice terraces were not the verdant green of closely packed rice plants that have been a ubiquitous staple for millenia, and is present in seemingly countless forms here in Northern Vietnam. Instead, we often saw co-culture mixes of bright red amaranth flower and seed heads, bright yellow pumpkin flowers calling for pollinators, and much taller corn stalks and cassava canopies; all crops of New World origin. This particular polyculture crop mixture would perhaps be much more appropriately placed in a milpa or home garden on a mountainside in Mesoamerica. 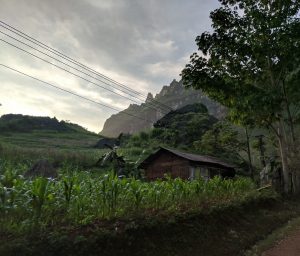 A maize plot outside of a house in Vietnam. Photo Credit: Lori Shapiro

and around the ancient rice terraces in Vietnam?  Until Cristobol Colon ‘discovered’ the Americas in 1492, all New World crop plants (including cassava and pumpkin) had limited geographic distributions, on the same continents where their wild, undomesticated progenitors lived. The movement of American crop plants across oceans – East to Europe, often through stopovers on the Canary Islands, is relatively well documented. Much less well documented are the routes and timing by which traders – mostly Spanish and Portuguese merchants and explorers – transported New World crops West, across the Pacific to Asia. Cassava is a starchy root crop indigenous to South America. The details surrounding how and when cassava made its way to Southeast Asia remain murky, but by the 18th century it was already common. Written agricultural records indicate that maize was already widely grown in Yunnan and Sichuan at the end of the 16th century, having likely been introduced to this region in tribute caravans crossing the silk road from regions farther West. By the 1800s, maize had already become an important crop in the mountainous areas unfit for rice production; perhaps an artifact of its millenia of adaptation to similarly harsh conditions during cultivation on the steep mountainsides throughout the Americas. 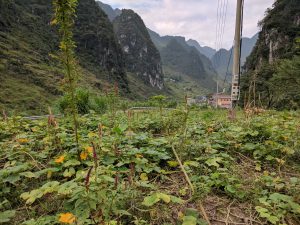 One outstanding question about the ecological effects of this global crop plant movement may only be answerable at the edge of sight: in their introduced ranges, do these crop plants interact with a different community of microbes? We now know that all animals and plants interact with a large, diverse, and beneficial community of microbes – the microbiome. Halfway around the world in the ancient rice terraces of Vietnam, these introduced American crop plants were likely having completely novel, non-coevolved interactions with the native microbial and insect community. The bright yellow pumpkin flowers reaching towards the morning sun were calling to highly co-evolved and New World endemic Xenoglossa and Peponapis bees – pollinators that were left behind in Mesoamerica. Absent also were the new world corn rootworm beetles (Diabrotica spp) that cause at least a billion dollars of damage per year to corn and pumpkin in their native range. We know that the co-evolved insects – both beneficial 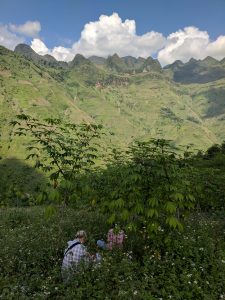 Sampling cassava on the side of a mountain. Photo Credit: Lori Shapiro

and harmful – of pumpkin, corn, and amaranth were left behind in the Americas. What has happened to the microbial mutualists we can’t see? Did they remain behind? Did they travel with the seeds to new places, hidden internally? Was cassava, which is transported by cuttings, able to carry its microbiome from the New World to Asia in a similar – or perhaps better – manner as plants that were introduced by seed, such as pumpkin?

To study how global crop plant movement affects ecologically important interactions, we stopped as the next cassava stand rolled into view, clinging 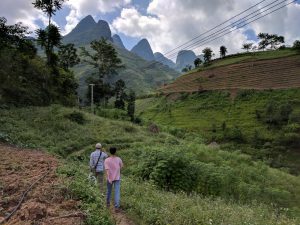 On our way to sample cassava on the side of a mountain with terraces and limestone peaks in the background. Photo Credit: Lori Shapiro

to the side of a steep incline, and our collaborator Thuy jumped out of the car. She carefully sterilized her plant surgical tools – scissors for cutting leaves and roots, and a metal spoon for digging bulk soil away from plant roots. She sampled leaves, flowers, stems, and roots into labeled sterile bags, quickly sealed the bag, and moved on to sample the next plant. We repeated this process with cassava, maize, pumpkin, cucumber, and luffa.

Now that we have returned to the lab, we are extracting DNA from these samples to contribute to the 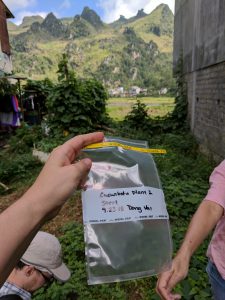 Global Crop Mutualist Alliance, to understand the way plant associated microbial communities differ in a plant’s native and introduced range. These samples collected in Vietnam can be compared with similar samples taken earlier this summer in Mexico, and at the agroecology farm at North Carolina State University.

We anticipate that this project – building libraries of the world’s crop plant associated microbes; understanding their structure, function, and geographic variation; and how human activities may have interrupted plant-microbe relationships – will continue for many years in the future. Stay tuned as we add more crop plants, and more places to our sampling. 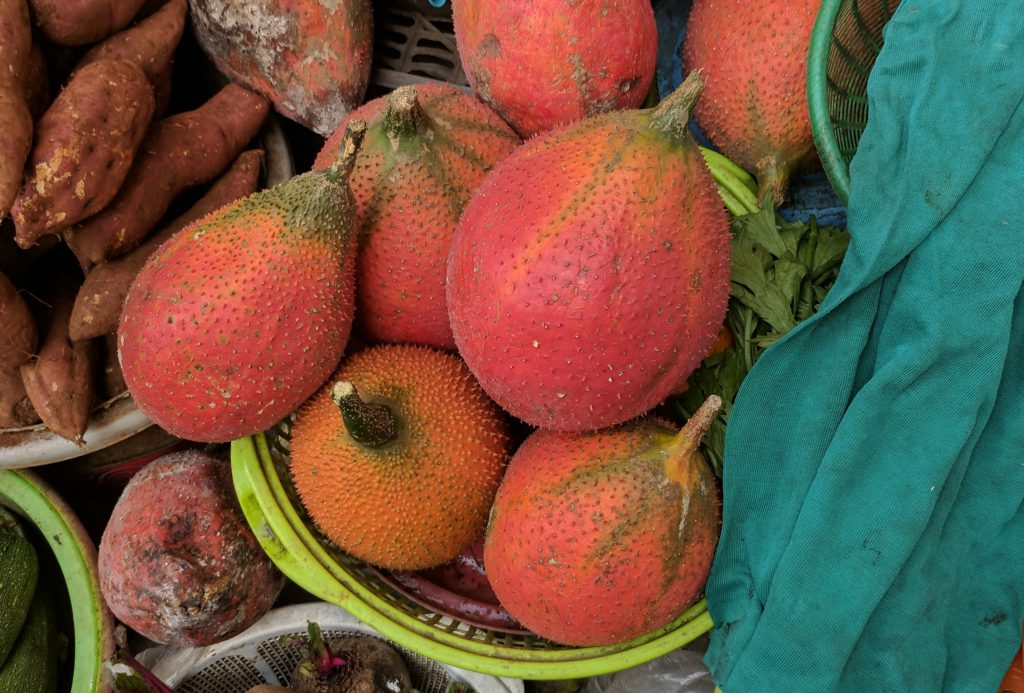 Header Image: Terraced agricultural land on the side of a mountain