This post was written by Clint Penick & Magdalena Sorger

As the world’s entomologists gather in Orlando this week for the International Conference of Entomology (ICE), we thought it a good time to revisit the famous Species Scape—the illustration showing that insects make up the largest portion of life on Earth. We scoured textbooks, scientific papers, and online databases to find the most current numbers for all species that have been described. There are new winners and new losers, but insects still make up nearly half of all species.

The history of the Species Scape began when biologist Quentin Wheeler and artist Frances Fawcett created an illustration that used the size of an organism on a landscape to indicate the relative number of species in that group. For example, the small elk in our Species Scape represents 5,898 mammal species currently described, while the giant fly represents more than one million insect species described. Wheeler and Fawcett’s original used a beetle to represent insects and a tiny elephant to represent mammals, but the takeaway is the same—there are many more insect species in the world than there are mammals or any other group of organisms for that matter.

Several big changes in taxonomy have occurred since the first Species Scape was created. What we used to call “Algae” is now understood to be several distinct groups. We included the largest of these groups—Chromista—to replace algae in our update. The original Species Scape also included Monera to represent bacteria and other single-celled organisms. We decided to leave out bacteria entirely because the number of species is greatly debated and probably far more diverse than current numbers suggest. This is likely true for other groups as well, such as fungi, which are probably more diverse than current numbers suggest.

Finding out how many species were in each group also presented some challenges. First of all, the number of species described is constantly changing as new species are discovered. What we show here is best understood as a work in progress, and the relative size of organisms on the Species Scape will inevitably change as new species are discovered and catalogued. Also, there was no single database showing all species currently recognized. In the end, we found that online databases had the best and most current numbers compared with published reports, so we relied on these when they were available.

Once we collected information on all the species we could, we still had one major challenge: deciding which groups to include and which to leave out. We limited our Species Scape to 17 major groups, which we included only if a group had more than 5,000 species. This ruled out some favorites, like tardigrades (1,167 species), but the majority of species are shown. In keeping with the original Species Scape, we decided not to show all groups at the same taxonomic level. For example, we include the kingdoms of plants and fungi, but we broke up the animal kingdom into separate phyla and smaller taxonomic groups like birds and fish (note also that “fish” represent several distinct lineages, but we lump them together here). To highlight the incredible diversity of insects, we separated them from all non-insect arthropods. Even with all insects excluded, other arthropods were still the third most diverse group after plants.

The success of the original Species Scape can be seen in the number of copies it has inspired, including our own. Our Species Scape is actually modeled most closely on the design by Karina McInnes. We hope this brings more people to consider the role of insects in our world and our need to protect their diversity. 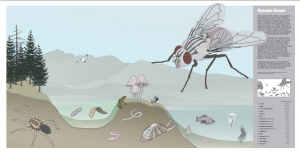 Download the full color version of the Species Scape

Download the text free version of the Species Scape 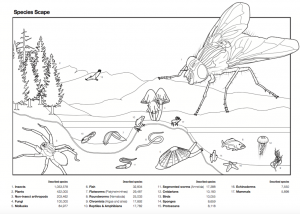