Could there be 200 million species on Earth?

Recently, one of my colleagues, Brian Brown, found thirty new species of flies in urban Los Angeles. Species not yet named. Species not yet studied. Species that could be of great value to society (or, less likely, great cost) but that had just gone missed, flying among highways and movie stars.

The discovery made by Brown and his team is wondrous, revelatory, awesome, and makes me want to look for new species of flies in my own backyard. But, in a broad sense, it is not a surprise, for one simple reason, two hundred million species live on Earth and just two million of which are named. That is to say, 99 out of 100 species on Earth are not yet named.

Where did I get the number two hundred million from? I just made it up. Though, there is a little more history than that.

When I first started as a faculty member at North Carolina State University I wrote a book called Every Living Thing in which I tell the stories of, among other things, the quest to find and name all of the species on Earth; every, living, thing. This quest has several features that have recurred throughout history. First, in each generation people find it easiest to believe that most of life is discovered. In the 1700s, Linnaeus thought that he, personally, would find all the species on Earth, about, he thought, 12,000 species. In the 1800s, as more and more scientists explored the tropics, it became clear that Linnaeus was very wrong. The number of species on Earth moved up (individual scientists named thousands of new species) as enthusiastic field biologists came back from rain forests with boats full of new life.

When I was born, in 1975, to the extent that anyone talked about it at all, the sense was that there might be a couple of million species on Earth, with more than half of those probably already named (though no one had a tally at the time).

Two things followed these estimates. The first was a series of passive aggressive responses from other scientists. Critics honed in both on Erwin’s equations and on the field measurements they depended on. The second was a series of spectacular attempts to actually try to find all of the species in particular places, a park in Costa Rica, a park in the Great Smoky Mountains, and Sweden.

At the time that I was writing Every Living Thing, the efforts to find all of the species anywhere had slowed. The leaders of these projects were valiant, emperors of biodiversity and yet ferociously underfunded ones. The attempts to estimate the number of species on Earth stalled too. Debate continued, but focused mostly on the potential number of species of tropical arthropods, not life in general. To the extent that a consensus emerged, it was a conservative one, namely that there were probably, at least, another six million arthropods to be named (which is to say, even by conservative estimates, something like six out of every seven arthropod species are NOT named). This was a smaller number than Erwin’s estimate and yet a number filled with caveats, a number that depended among other things on the assumption that in the unexplored parts of the world life more or less obeyed the rules discerned in the few sort of well-explored places. Even fewer studies commented on the rest of life, the bacteria, diverse worms, fungi, protists, viruses and the like (of note, in questions of biodiversity vertebrates are so unimportant as to disappear in the rounding error). 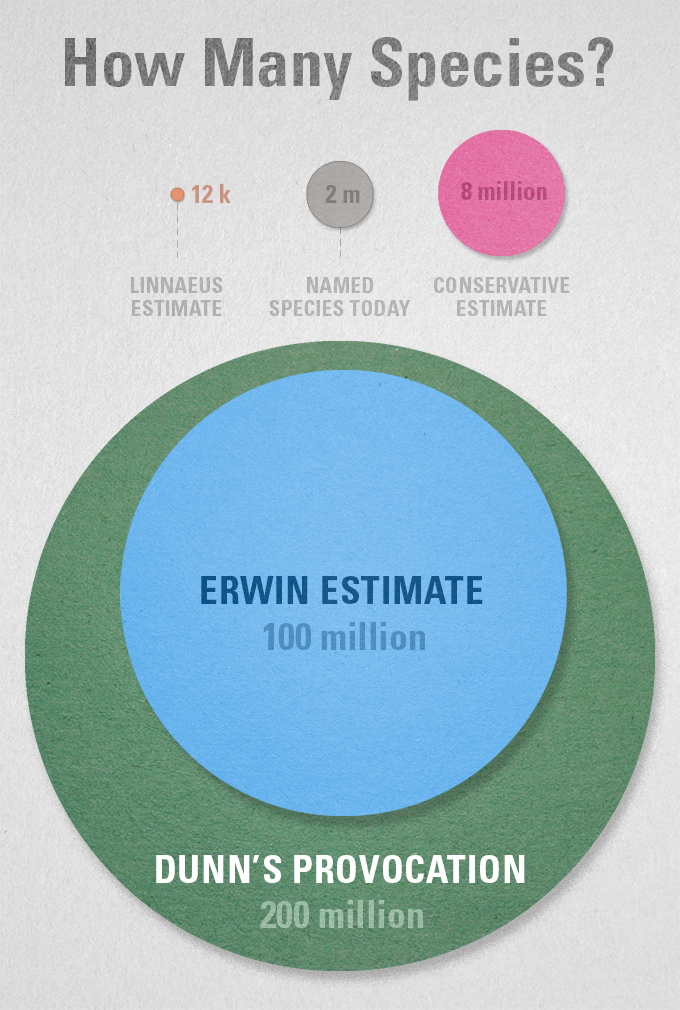 In considering these stories in Every Living Thing, I concluded that scientists had all but given up on attempts to estimate the total number of species on Earth, much less find them. Specialists in individual groups, for example phorid flies, returned to the hard work of naming and studying new species, but on their own, within their subtribes rather than as part of an ambitious whole. But I always wondered if, in noting in the book that these attempts had stalled, that I had been premature. Science, after all, can go in fits and starts. Well, ten years has passed and now I can make my statement more confidently. The attempts to figure out how many species live on Earth and the attempts to find, name and study all the species in a particular place (much less the entire Earth) have ground to something precariously close to a halt.

Here and there, attempts to survey all the taxa in particular places continue. The All Taxa Biodiversity Inventory in the Great Smoky Mountains National Park, for example, continues to send people through the park looking for new discoveries. But the project employs three people when it could use three hundred, three people and armies of volunteers. None of the other similar projects of which I am aware have been as ambitious. Certainly none has approached complete. I recently had the pleasure of talking with the folks leading the Smoky Mountains project. They retain the awe at what is around them, about what is not yet named and understood and also the sense that what remains is a mountain of life into which they are shining a meager light.

Meanwhile, attempts to estimate the total number of species on Earth have slowed to a few papers a year (see below) most of which consider only eukaryotes (Knowing what a species in among bacteria and viruses is a messy business) and, even in doing so, produce wildly divergent estimates of what is out there. One study predicts 6.7 million species of tropical arthropods, another just two million species in total (including the arthropods and everything else), another a million species of marine eukaryotes. Like blind men measuring an elephant we announce our partial views.

More conspicuous are announcements of our complete ignorance. Thirty new species of frogs discovered in Sri Lanka. Thirty new kinds of flies in Los Angeles. New phylum discovered in deep sea. New order of insects discovered in an abandoned lot.  These announcements seem significant in and of themselves. They are. But they also give us a flavor of what is left in general, a diversity of life so great that I can speculate (wildly) that there might be two hundred million species on Earth. Do I really believe this estimate? Maybe. Maybe not. Either way I’ll offer it as a straw man, one I hope stirs more young scientists to  try to estimate the diversity of all of the species on Earth including the least known groups or, more importantly, to want to enact enormous change, to lead a true global survey of the life around us. Regardless of just how far we are from the finish line, whether it is another million species or another one hundred and ninety nine, it remains easy to find new species, far harder to name them and study them.  Sir Robert May once said he would never believe any estimate of the number of species on Earth until a patch of diverse tropical forest, somewhere, was surveyed exhaustively. That was in the 1980s. No patch has yet been completed. More than that, as my collaborators and I have begun to work with the public to study homes, it has become clear no home has been either. We have found more than two thousand ANIMAL species in homes, many of them not yet named and more species of fungi in homes than there are named species of fungi in North America. Not to mention nearly a hundred thousand taxa of bacteria. 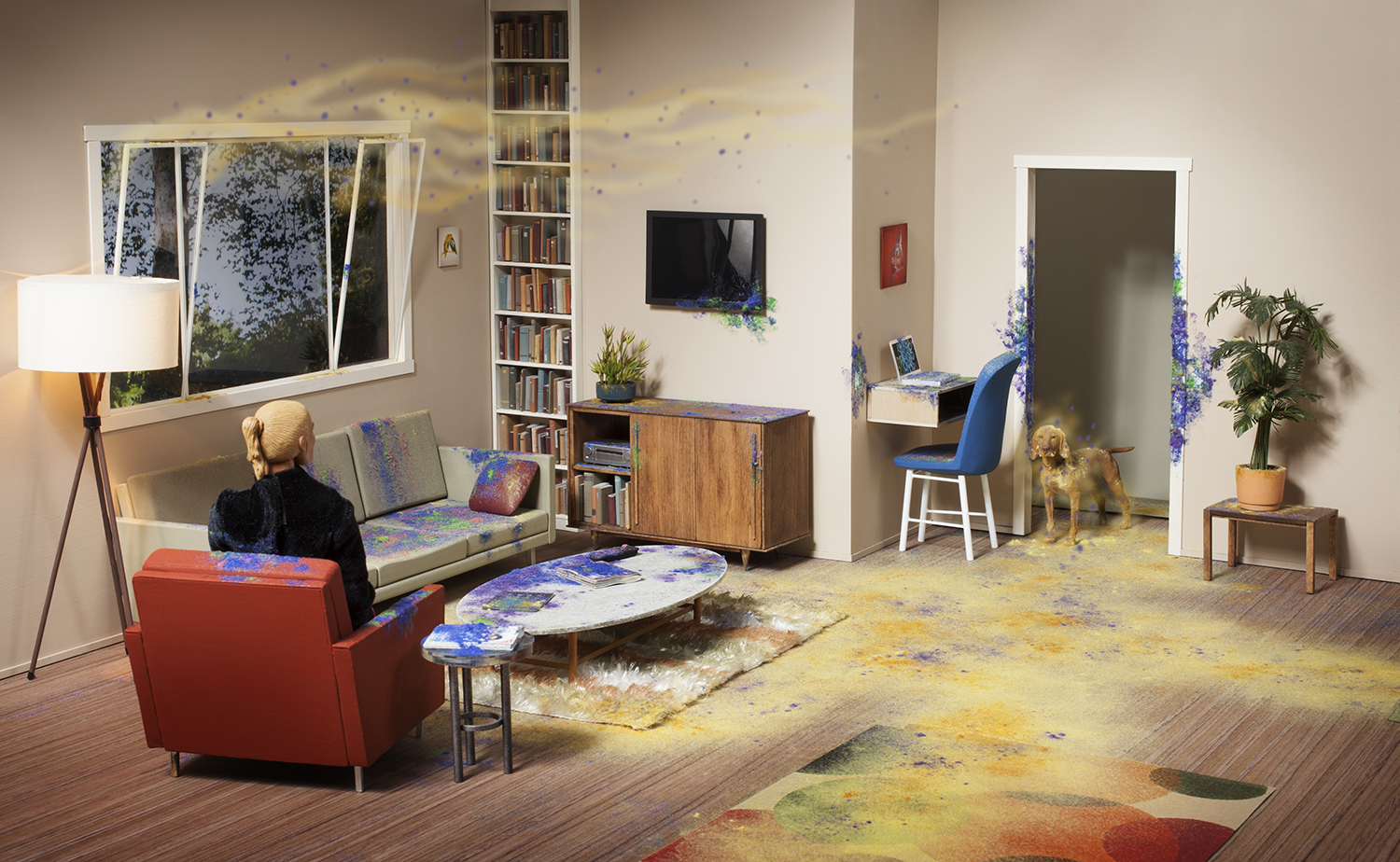 Why do we need to study this life when so much else deserves funding? Our ancestors sought to understand the life around them, to name it with traditional names, in part out of curiosity. We wake up among the sublime diversity of the rest of life, how could we not consider this awesome and shimmering richness?  But the more convincing argument has always been the utilitarian one, the potential benefits and costs of unknown, unnamed, life. The unknown life offers value to medicine, industry and other human endeavors. Among the unknown species are those that could save us not only from our current ills, but also the new ones we will undoubtedly face in coming generations. Then there are the costs. Each time you breathe in, most of the species in the air that enters your lungs (and there are thousands) are not yet named or studied. We do not yet know if the average species in your lungs as you read this will kill you or sustain you. This has always been a challenge to humanity, but as we alter the distribution of life on Earth, it is ever more of a challenge. We are changing the conditions in ways such that millions of species will move, multitudes of species we have never encountered before in the places we live will arrive. We will breathe them in. We will carry our babies out into the ether of their bodies. We will sit in the din of their songs and consequences of their actions and, unless something rapidly changes, we will, on average, not even know their names.

Read more: For the graduate student (or high school student for that matter) provoked by 200 million, here is some good recent reading on where we are with regard to estimates of global diversity today. The field continues to move forward, but given the importance of the topic, it moves slowly and with view voices. At this moment more people on Earth can list all of Lady Gaga’s songs in order of appearance on her albums than have seriously considered the question of the number of other life forms with which we share our blue-green, dot.