Chimps and Humans are Less Similar than We Thought

Mary Claire King, as much as any individual scholar, has changed how we think about what it means to be human. She did so using genetics as a lens through which to see what was otherwise invisible. In her hands this lens offered many insights. It was King who first identified a key gene in breast cancer. It was King who helped to identity the missing dead in Argentina in the 1980s. It would also be King who, in 1975, first compare the genetic similarity of humans and chimpanzees. It was known chimpanzees and humans were similar, kin, but just how similar? One could only really guess. And to compare a chimpanzee and a human, one hunched, one upright, one furry, one relatively bald, one able to build cities, write, read and make music, one not, it seemed clear that a fair number of differences needed to be accounted for.

King compared the genes of chimps and humans. When she did, she was in for a surprise. The humans and chimpanzees were not 50% similar genetically, or 60%, or even 80%, they were 98 to 99% similar, nearly identical. All of the differences between us and them, must relate to the 2%.

What has followed has been a rich and detailed consideration, a consideration that is still very much underway, of the 2%. We now know many of the genes that lead human chimpanzee immune systems to be so different, and have some suspicion as to which genes are associated with chimpanzees never get the kind of heart attack we get (for more on that, see the last three chapters of The Man Who Touched His Own Heart). But there was a catch.

While geneticists were comparing humans and chimps, another tribe of biologists, parasitologists, were doing something very different, tallying lists of the species that live in chimps or live in humans (and every other species for that matter). For parasitologists these included both big things (worms and mites, for instance), little things, such as protists, and truly tiny things including viruses. But there was a barrier to progress. The parasitologists studying humans and those studying chimpanzees, they weren’t friends. And so while each group had a tally of the organisms found in their study animals, the tallies were not compared, EVER. But such a comparison is important. A large proportion of the genes (and their products, including proteins, but also our behaviors and much more) of any organism are those of its parasites and pathogens.Someone with more than one worm species, for instance (many people have more than one worm species), may actually be dragging around more worm genes than human genes! We are what eats us. 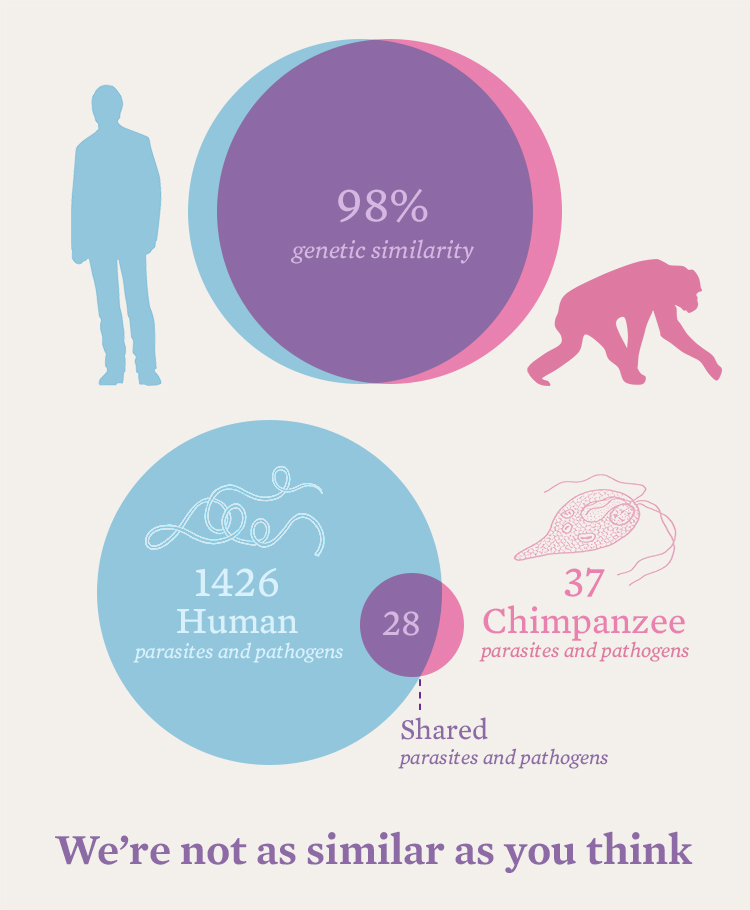 How did this happen? As humans became sedentary and began to domesticate and then associate with agricultural species, we picked up pathogens found in those species. Each place we moved, we picked up more new pathogens from new species we interacted with. Rabbits, lions, cows, and pigs have all donated to us some of what ailed them. Then, a whole new group of pathogens evolved, pathogens that depended on our living in enormous groups (cold viruses for instance). As a results, humans and chimpanzees are really no longer that similar. The differences in the species we associate with, our parasites and pathogens (and then also our agricultural species), are the biggest differences between us and them, between chimps and humans.

But there is more. What I have compared so far are the collective differences, all of the species found in chimpanzees to all of those found in humans. The story is different for the comparison of an individual chimpanzee and an individual human. Here, the real story is not about the differences between chimpanzees and humans but instead the differences from human to human. I know of no data with which to tally the exhaustive list of species found in an individual chimpanzee, or, for that matter, any individual human, but our general understanding is something like this. The average chimpanzee hosts a relatively large proportion of all of those pathogens and parasites known from chimpanzees. Let’s say ten percent, it might be higher. Hunter gatherer humans are likely to have hosted something similar, including many worms and protists. Agricultural humans, individual agricultural humans, would have had and in developing countries still have, tens of kinds of parasites and pathogens—a couple of worms, many protists, malaria parasites, and more. But the most remarkable (and tenuous) part of this story is what is going on in developed countries, with good sanitation and public health. In those countries, the average person has very few parasites and pathogens and those they do have are dominated by relatively innocuous viruses such as the cold. We sit beneath an enormous wave that is held back by public health, by vaccinations, sanitation, hand washing and other aspects of development we take for granted. 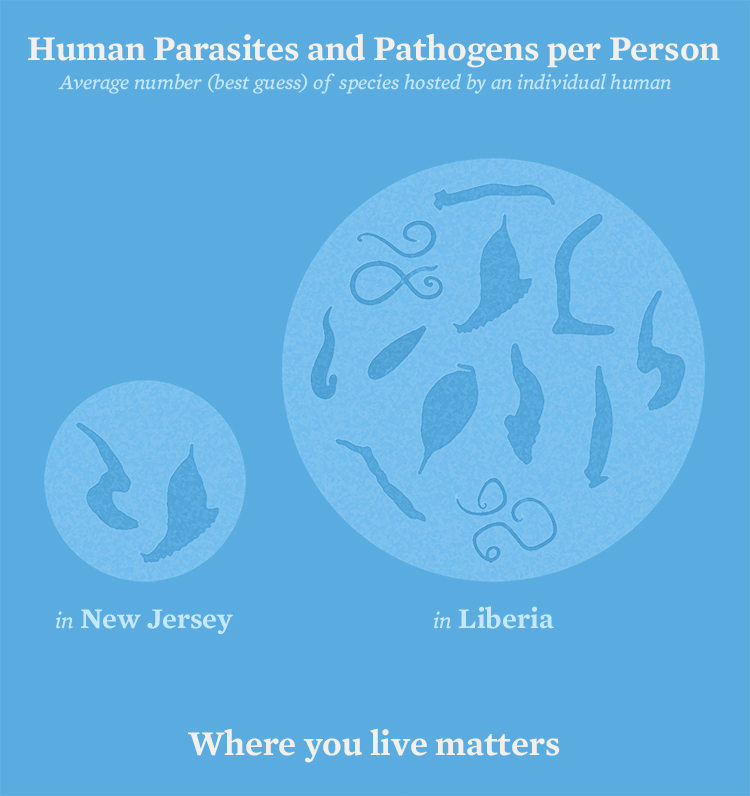 Recently, Martin Blaser (among others) has argued that one of the biggest changes we face today is due to changes in the species of beneficial bacteria in our guts due to, among other things, the overuse of antibiotics. Here he is not talking about parasites and pathogens but instead beneficial bacteria, our mutualists.  But this change (which is real and among the great medical challenges facing developed countries) comes on top of the far bigger change, the change that separates humans and chimpanzees, our acquisition of thousands of parasites and pathogens and then our remarkable ability (thanks to those 2% of genes) to build societies in which we escape those same species. It is only in light of this bigger story that our newer modern problems, chronic inflammatory diseases such as Crohn’s disease, heart disease and even our allergies fully make sense. We have not just changed our gut microbes. We have changed our web of interactions such that we are collectively connected to more species than we have ever been, but individually far fewer. It will take decades to fully understand the consequences of this shift for how our bodies work, decades to make sense of who, relative to chimpanzees and the rest of life, we really are. What is for sure is that in terms of our “interactome,” the species we interact with, whether to our benefit or our detriment, we are unlike any other species on Earth, any species that has ever lived.

For more on our changing interactions with other species read…

The Man Who Touched His Own Heart (http://www.robrdunn.com/books/the-man-who-touched-his-own-heart/)
The Wild Life of Our Bodies (http://www.robrdunn.com/books/the-wild-life-of-our-bodies/)
Every Living Thing (http://www.robrdunn.com/books/every-living-thing/)
This work is part of a collaboration in process, one between Duke University (Charlie Nunn), the University of Copenhagen (Carsten Rahbek and Fie Stensgaard) and my tribe at North Carolina State University. As we continue our comparisons, comparisons in which we seek to take a better measure of who we are and how we have changed, I’ll keep the story updated here.
Methods (in progress)
Data on human pathogens are derived  from a comprehensive literature survey of human pathogens carried out in 2001 (Taylor et al., 2001), and updated in 2005 (Woolhouse & Gowtage-Sequeria, 2005). In this list, a human pathogen is defined as “a species infectious to and capable of causing disease in humans under natural transmission conditions.” (Taylor et al., 2001).
By Rob Dunn|2016-11-22T13:46:45-05:00April 8th, 2015|