Over the last year, the students have participated in the eMammal citizen science project, deploying wildlife cameras in their schoolyard to capture animal activity. The students have been working in collaboration with scientists at the NC Museum of Natural Sciences in Raleigh and the Smithsonian Institution in Washington, D.C. At Burgaw Middle School in Pender County, Glenn’s students have identified white-tail deer, opossum, raccoons, gray foxes, and rabbits on their schoolyard camera traps. At Graham Middle School in Alamance County, Pasion’s students have spotted a coyote and red foxes as well white-tail deer, raccoons, and gray foxes. In addition to connecting with scientists at the museums in Raleigh and D.C., the students connect with partner schools abroad in Mexico and India.

During the NCTIES student showcase, the middle school students shared photographs from camera traps, explained the processes in setting up and using the camera traps, and explained their role in identifying animals and collecting data for scientific research. Dozens of teachers attending the conference stopped by to discuss the project with them.

“I liked presenting eMammal to other teachers and I really liked that they wanted to know more information about the project,” said Burgaw Middle School student, Zaniyah Simpson.

Nick McGowen, also a student in Glenn’s class at Burgaw Middle School, said he has enjoyed learning more about the animals on the camera traps, especially the ones in other countries. He added, “I have learned what it is like to be a scientist. There is a lot of work behind the scenes that goes into each project.” 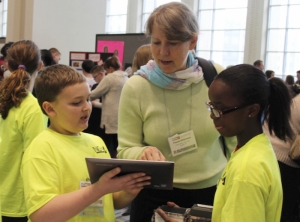 Glenn was very proud of the student’s presentations. “I was extremely proud of the way our students accepted the challenge with self-confidence and poise. After a few minutes, it seemed like they didn’t even need me standing around. I was excited about the interest expressed in citizen science by passing teachers. I think that reveals the popularity and promise of using citizen science in the classroom for science education.” 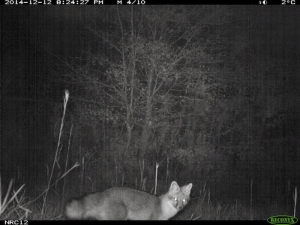 A gray fox is captured by a camera trap setup by 6th graders at Burgaw Middle School near their schoolyard.