Watching Out for Nesting Birds

Look but don’t touch. This was a lesson I learned early on as a young boy, staring intently along with my grandmother at a bird nest. Inside a shrub-like tree, a bowl of straw lay almost hidden. Within it, several nestlings, their mouths wide open, were awaiting their next meal.

After a quick look, we hurried away, soon noticing that the mother robin returned with sustenance for her young. Folklore, of course, advises people to not harm bird nests, for doing so was commonly thought to bring bad luck (1). However, for many children, superstitious appeals are not necessary, as a simple reverence for nature may be more persuasive. Why disturb a nest? Instead, by just watching, all people, no matter their age or occupation, can spend days learning about the behavior of our winged neighbors.

Such appreciation is expressed eloquently in the beginning of Walt Whitman’s poem “Out of the Cradle Endlessly Rocking”, which notes his frequent engagement afar with a pair of nesting mockingbirds: “… every day I, a curious boy, never too close, never disturbing them, / Cautiously peering, absorbing, translating.” (2)  The perils of nature may have eventually laid claim to one of the birds, but the poet’s powerful connection to them, especially the surviving bird, is undeniable.

As a few literary examples demonstrate, birds do sometimes choose risky locations for their nesting spots. Robert Frost’s poem “The Exposed Nest” relates an amazing find within a freshly cut hayfield—a nest of young birds somehow surviving untouched by a passing blade (3). In John Clare’s “The Pettichap’s Nest”, a narrator marvels at a warbler’s eggs precariously placed by a well-traveled horse-and-wagon road. “Yet,” he remarks in the poem, “like a miracle, in Safety’s lap / They still abide unhurt, and out of sight,” housed in a nest “Built like an oven.” (4)

Henry Wadsworth Longfellow’s “The Emperor’s Bird’s-Nest” presents perhaps what may be the worst place imaginable for most birds—the outskirts of a battlefield. However, in this poem, the 16th-century Holy Roman Emperor Charles V, while planning a military campaign, decides to protect a swallow nesting on the ruler’s makeshift dwelling. Even when his army finally packs up its belongings, the tent is ordered to remain, “Loosely flapping, torn and tattered, / Till the brood was fledged and flown.” (5)

People, having an affinity towards nesting birds, usually desire to offer some form of protection to the winged caregivers and their offspring. This is a big reason for the introduction and success of birdhouses. We enjoy watching and hearing bluebirds, cardinals, chickadees, finches, wrens, and many other of our feathered friends. In fact, it’s not uncommon for folks to have several nest boxes set up near their home, a practice commonly referred to today as “backyard birding.”

The use of human-made birdhouses actually goes back at least five centuries to parts of Europe, Asia, and North America. These structures were often, and still are, freestanding entities placed near human residences. They’re typically constructed out of wood, but materials over time have varied, including clay, gourds, and, most recently, concrete (6). Designs tend to be simple and box-like for housing one bird nest. Ornate assortments also exist, consisting of decorative models with multiple nesting compartments made to resemble castles, palaces, ships, and other elaborate abodes.

Not all birdhouses are built as isolated units. Enclosures for nesting birds are sometimes constructed as part of a building’s façade. The country of Turkey, especially the city of Istanbul, is renowned for such architectural structures (7). Of course, several kinds of common birds are notorious throughout the world for nesting in parts of human dwellings not intended as “birdhouses.” Pigeons display a fondness for ledges, for instance, while certain swifts like to use chimneys.

Some Quick Guides for Getting Started

Birds generally don’t require fancy amenities, but they do need a dry, well-ventilated space that’s just the right size for a particular species’ entry and residence. Using the interactive tools on the Cornell Lab of Ornithology’s NestWatch’s site, you can quickly determine which types of birds, based on region and habitat, are found in your area. Out of those, think about which ones you’d like to attract.

Also, to help you offer a safe, sturdy, and accommodating home for your avian guests, an illustrated guide with tips and information on birdhouses is available, as are step-by-step instructions on the proper way to install a camera within a nest box and monitor nesting activity.

Teachers can even download a NestWatch lesson plan packet for their students. Course information includes how to identify local birds by their song and type of nest, guidelines and legal requirements for observing nests, and methods for collecting and reporting data.

With the lesson plan packets and latest technology, you can look all you want. But still, no touching. 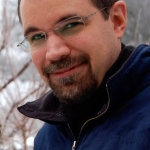 Michael Emberson writes frequently about the influence of birds on culture, exploring their impact on such aspects as art, literature, religion, and folklore. Read more on his weekly blog A-­wing and A­-way.

(2) Whitman, W. “Out of the Cradle Endlessly Rocking”, Poetry Foundation

(6) Cranmer, T. “Nesting Cavities and the History of the Birdhouse”, Cranmer Earth Design