The Effects of Urbanization on Biodiversity: Interview with Myla Aronson

Our blog and social media feeds have been overcome by urban sprawl this week.

Yesterday, Rob wrote about the rise of a new mega-city: Charlanta. He described new research by Adam Terando and team that predicted the future spread of cities in the South.

Our colleague Steve Frank and his PhD student Adam Dale in Entomology just published two research papers describing what increased warming associated with this urbanization means for street trees and and a common insect pest, the gloomy scale. Turns out gloomy scales are way more abundant on red maple trees in warm, urban sites than cool sites — they make more babies! This one-two punch of more scales plus heat stress means urban street trees aren’t doing so, pardon the pun, hot — that is, those trees tend to have more dead branches and sparse foliage. Check out Steve’s EcoIPM blog for more details and pictures on this work.

Today, we feature an interview with Dr. Myla Aronson, an urban ecologist at Rutgers University. Earlier this year, Myla and colleagues published results from a global analysis of the impacts of urbanization on bird and plant diversity.

I recently caught up with Myla to chat about this study and its implications for biodiversity in cities.

Lea: Why were you interested in urban ecology, what got you into studying the wild life of your urban environment?

Myla: I have always loved nature and the environment. As a kid, I spent my time in northern Florida, Cape Cod, MA, and Ithaca, NY. I was exposed to many different habitats – from coastal dunes, rocky shores, and long-leaf pine forests to deciduous forests and streams. In college I became interested in plant biodiversity while doing research on forest herbaceous species at Cornell University’s Arnot Forest outside of Ithaca, NY.  Through graduate school, I became more and more interested in how to maintain biodiversity in urban landscapes so that cities are sustainable for both people and nature.

Can you briefly describe your study and findings?

We found that while a few species — such as pigeons and annual meadow grass — are shared across cities, overall the mix of species in cities is native and reflects the unique biotic heritage of their geographic location. While we show that urbanization has caused cities to lose large numbers of plants and animals, the good news is that cities still retain endemic native species, which opens the door for new policies on regional and global biodiversity conservation. In particular, our study highlights the value of green space in cities, which have become important refuges for native species and migrating wildlife.

We would expect common elements of city bird and plant biodiversity (like pigeons and grass) but your group discovered that there are subtle differences between each urban center – can you give us some examples?

The commonly held belief in both the public and scientific realms is that cities are all the same when it comes to bird and plant species. As humans move around the globe, we bring species with us, both intentionally, such as the introduction of European starlings to North America, and unintentionally, such as the introduction of Japanese stiltgrass in packing material. Here we show that although cities do share some particular plants and animals, overall the mix of species in cities is native and reflects the unique biotic heritage of their geographic location.

Can you provide some examples of what you mean when you say, “anthropogenic” and “non-anthropogenic factors”?

Anthropogenic factors are those that are driven by people, such as the kinds of urban land uses (industrial, commercial, residential, etc), the amount of natural vegetation left in a city, and the age of the city (from when the city was established as a city). Non-anthropogenic factors are the climatic and physical features of the city not driven by people. These factors include temperature, the seasonality of temperature (how variable the temperature is across seasons), precipitation, the seasonality of precipitation (how variable precipitation is across seasons), elevation, and the variability in elevation.

Your study suggests that the more “urban landcover”, or man-made non-natural structures, in a city, the fewer birds present since they rely on vegetation. Additionally, cities with larger “intact vegetation”, or areas with plants, preserve more plant species. What can cities do to ensure that more plants (and then birds) are preserved within the urban area?

Here we emphasize the importance of conserving natural habitats in cities to support biodiversity. Conserving green spaces, restoring native plant species, and adding biodiversity friendly habitats within urban landscapes will support more bird and plant species. In particular, the use of more native plants in city park landscapes, particularly plants that provide flowers, fruits, and other resources, can enhance bird populations in cities.

What can you encourage people to do in their own neighborhoods to support plant and bird biodiversity?

Use more native plants in residential gardens and city park landscapes – especially plants that provide flowers, fruits, and other resources for wildlife. Plant species that support pollinators, which can help many native plants and animals.

What are your future plans in urban ecological research?

Our collaborative research group was just awarded funding from the National Science Foundation to develop a Research Coordination Network entitled “UrBioNet: A global network of urban biodiversity research and practice.” My colleague at University of Missouri – Columbia, Charles Nilon, and I are leading this group. The goals of this network are to add more cities to the existing dataset, particularly cities in the tropics and other biodiversity hotspots, collect data on additional groups of species such as bats, pollinators, and freshwater fish. I am also actively researching urban and suburban upland forests, riparian forests, and wetlands, in order to understand the patterns and processes of plant diversity to inform restoration and management of these habitats.

Here is a softball question, but I’d like to hear your answer: What is so bad about losing native species in cities and replacing them with exotic species?

The majority of people across the world now live in cities (over 50% of the urban population). Often, the plants and wildlife in cities are the only interaction with nature that people have. Focusing on the native biodiversity of cities is important for the human experience as well as for the ecosystem services that Nature supplies (like water quality enhancement, cooling hot cities).

Often, the plants and wildlife in cities are the only interaction with nature that people have. 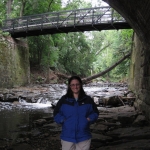 Dr. Myla Aronson is a a visiting professor at Rutgers University in the Department of Ecology, Evolution and Natural Resources. Her research is focused on patterns, drivers and management of biodiversity in human dominated landscapes, urban ecology, plant ecology, and restoration ecology.