Q & A with Tyler Vitone

It’s always fun to have visiting scientists come to our lab — it gives us a chance to show off our beautiful campus and city and, mostly, reinvigorates us and reminds us why we do what we do. Plus we get to eat ice cream in the middle of the day using the thinly veiled excuse: “It’s made right here on campus!” Tyler Vitone, a master’s student in Andrea Lucky’s lab at the University of Florida, drove up to Raleigh this week to meet with the Dunn Lab and Your Wild Life to about ants.

Lea: What is your affiliation with the Andrea Lucky lab?

Tyler: I just finished my first year in my master’s program with Andrea Lucky at the University of Florida in the Entomology and Nematology Department. There I do three major things: 1) Take classes and work as a teaching assistant in a course titled “The Insects” which is a general entomology course for non-science majors at the University of Florida, 2) Process samples that come in for School of Ants from the state of Florida, 3) Do my research which involves the pavement ant, Tetramorium species E. I am doing population genetics work on that species with samples collected by School of Ants participants throughout the country.

What’s the most exciting part of your job?

What types of work do you do with schools? Why do you think it’s important to get kids involved in your research?

I definitely think it’s important to get the public involved in science to increase their scientific understanding. My brother and I were the first people in my family to go to college; we are both first generation college students. I was always really interested in science growing up; and I’ve tried hard to convince my parents why the scientific work I do is interesting and important. I’m interested in communicating science — first with my parents and now with students. I think it’s something cool that I can do with the position that I’m in now at the University of Florida.

How do you think that citizen science empowers students to feel more involved in the scientific community?

People often perceive science as something that’s limited to really nerdy, academic-type people and that to be a scientist you have to work in a lab. I think citizen science projects really help the public to understand that science really isn’t this inaccessible thing that only a few people have an opportunity to participate in —  anybody can participate and be a scientist by making observations in their backyard.

What made you focus on pavement ants (Tetramorium spp.)?

Tetramorium is one of the most widespread urban ants in North America and little is known about this ant because it lives in urban environments. People don’t study ecological questions in urban environments as often as they do in forested environments. There’s a lot of opportunity to study Tetramorium since it’s so broadly distributed. The number and geographic distribution of School of Ants samples allow me to do a wide scale study of the species. There are a lot of interesting questions that you can answer because such little is known about the species. 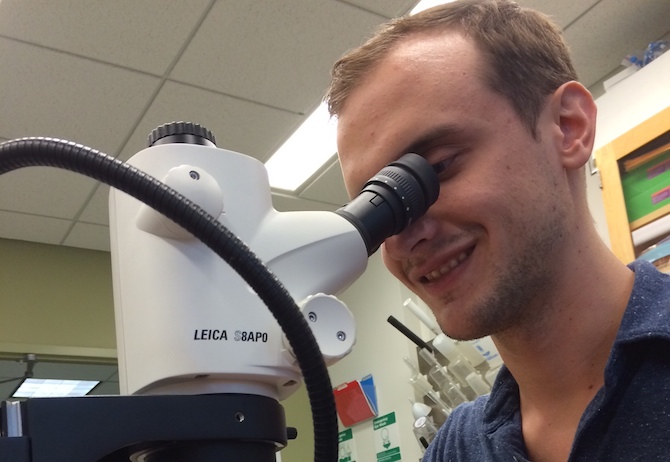 Tyler hard at work identifying ants at the microscope.

Where did pavement ants live before there was pavement?

They were introduced to North America from Europe via ships sometime between the early- to mid-1800s. They prefer habitat with really short or sparse vegetation. I would guess riverbeds and those kind of environments were ideal before pavement came along. I could imagine they probably adapted to pavement as soon as the Romans started to construct roads. They are really broadly distributed.

Where are they now?

It was thought that they were bicoastally distributed in the eastern United States and then in California and the Pacific Northwest, but with School of Ants samples and more recent scientific literature records, it appears that they are more contiguously distributed across the northern United States. There are some states that are poorly sampled like North Dakota, South Dakota and Nebraska forming this line through the middle of the country where we don’t even know if they’re there.

So we need more School of Ants participants in North Dakota, South Dakota and Nebraska?

Yes — participants from those states would be very helpful! And if those samples could be sent to Florida that would be very useful for our research.

How do you study the ants?

We are able to get DNA out of the the ants collected by School of Ants that is of high enough quality to use in molecular studies. I started my research by sequencing a gene in the mitochondrial DNA, called COI. To get ant DNA from samples, I would poke a hole in the right side of the thorax of the ants and then digest them in enzymes and buffer and then perform a DNA extraction on the “slosh” that had come out of the hole in the thorax. I did it that way so I could still have the physical specimen; a lot of other DNA studies just grind up parts of the ant. The right side of the thorax is where ants are point mounted for keeping them as a prepared specimen, so you don’t really see the hole in photos or anything. For the next portion of my study, I’m using a technique called RAD sequencing that will let me look at many short sequences throughout the ant genome, rather than just one gene in the mitochondria. This next-generation sequencing technique will help me examine genetic diversity in the pavement ants at a much  higher resolution. I’m really glad the ants from School of Ants had enough high quality DNA to successfully do this work.

What do you do with the data after you have looked at the genome?

You compare similar parts of the genome and look for small differences in DNA sequence among individuals from different populations (called polymorphisms). The sequence differences among populations help us better understand the degree to which some populations are more isolated while others may interact more and experience more gene flow.

Did you ever think you would be studying ants?

I’m interested in all forms of life. I like the underrepresented animals with a bad reputation. I studied freshwater mussels which look like rocks, covered in algae in rivers — but they’re actually really important. They’re often overlooked and they’re really imperiled in North America, even though North America has a great biodiversity of mussels. I also like studying snakes — because they have a reputation and people fear them; I guess it’s kind of the same with ants. A lot of people I meet think that there are only a few species of ants out there, but there are 13,000 described species of ants. That always really shocks people when they find out how many species of ants are described. I guess it’s not too surprising I ended up studying ants.

Want to see some awesome pictures of pavement ants, including those partaking in epic sidewalk battles? Check out Alex Wild’s photo gallery!