2014 marks the 3rd consecutive year that a pair of black vultures (Coragyps atratus) have chosen the roof of the National Science Foundation to raise their family. NSF is an independent federal agency that promotes the progress of science by funding basic research across all fields of science and engineering research and education.

[Editor’s note: NSF has provided funding for a number of Your Wild Life projects through grants to our principal investigator, Rob Dunn, including School of Ants and Students Discover.] It’s housed in a twelve story building in Arlington, VA, just a few metro stops away from Washington, DC.

In 2012, a pair of vultures roused great excitement among staff in the building, when they were spotted taking turns roosting on two eggs they had laid on NSF’s roof. One egg never hatched. The second one did and the chick fledged on time. Unfortunately, it chose a window sill on the 6th floor to test out its wings and fell to the ground in front of a restaurant. NSF employees responded quickly, protecting the injured bird from further harm and calling wildlife rehabilitators, who took the young vulture to a rehab center where it healed and was released. In the spring of 2013, the vulture parents returned to NSF. This time, two chicks born in late June successfully fledged in early September, to the great delight of NSF staff.

The photo above was taken July 3 of this year and shows “NSF’s” black vulture parents with one of their two thriving chicks, now about 6 weeks old. For some of us at NSF, checking in on the progress of the youngsters is a weekly must and it’s exciting to watch this avian family quite successfully use our built environment to raise their family. 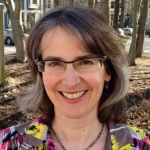