Summer is nearly here which means the field season is now in full swing! Last week Lauren began a new photo series on the blog called Behind the Science, highlighting our research team in action. In addition to a rockin’ crew of post docs and graduate students, our team also includes a dedicated corps of undergraduate students, high school interns, and research technicians. And so this summer we’ll continue a feature we started last year called Meet the Worker Bees, profiling all the folks who make our research engine hum in the summertime.

Today we want you to meet Liza, a graduating senior from Apex High School.

The project/research that I am currently working on is called “Urban Buzz.” We’re studying the effects of urbanization on both 13-year and 17-year periodical cicada broods all over the eastern US. We are looking for effects like asymmetry (different lengths of wing veins or leg segments on each side).

Last summer citizen scientists up and down the East Coast sent us their dead periodical cicadas (and we’re asking folks in Iowa, Illinois, Ohio, Louisiana and Mississippi to do so this year). The dead cicadas have been hanging out in the freezer until you joined our team and started examining their legs and wings.

How many dead cicadas have you dissected so far? Tell us about the smell of frozen, dead cicadas…

Oh, jeez. Right now I’m at about…300 or so, I believe! The smell of frozen, dead cicadas is not going to be one you soon forget – it smells like you let a mouse die in your house and rot, then you froze it, then you took it out and warmed it up again, creating an even stronger smell once it “defrosts.” Sweet like perfume, wouldn’t you say? Luckily only some of them are that smelly so I don’t have to look like a gulping fish the entire time! 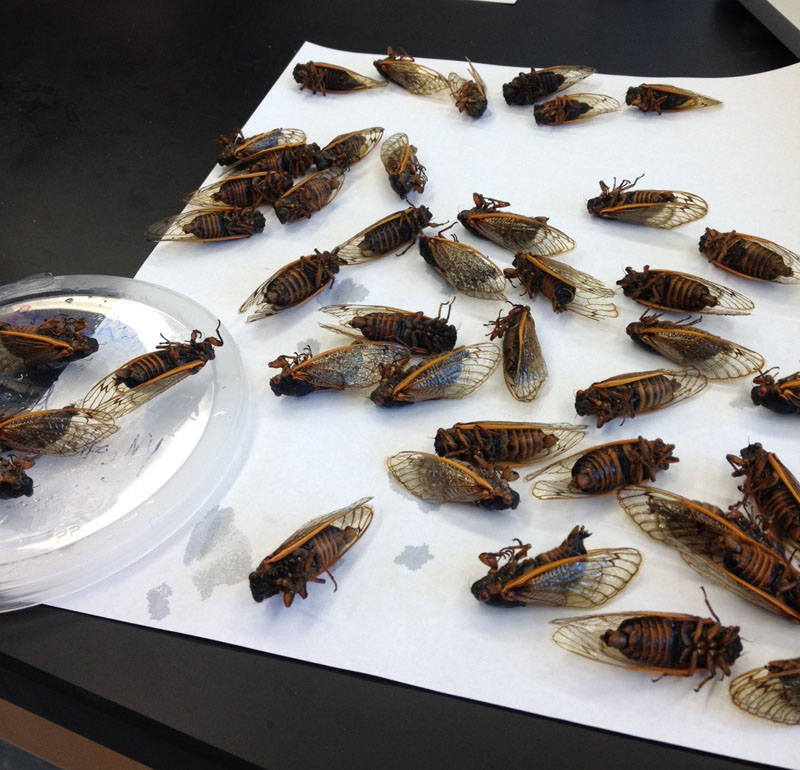 Some of the dead cicadas Liza has been examining.

What have you found to be the most interesting aspect of working in lab? What’s surprised you?

What I have found to be the most surprising aspect of working in a lab would be the fact that it can be fun – yeah, I know, what am I doing in a lab if I wasn’t even sure it would be fun?! It’s so different from what’s been pushed on me in school — I thought it would be just like that but instead I’ve found lab work can be fun and you can actually research and study useful, or at least cool, stuff! The most interesting thing I’ve found so far would be how many people will send in specimens to be observed and studied – I think it’s awesome!

What do you listen to while working?

While working, I like to listen to my Grooveshark account! It has music from Bon Jovi, Metallica, Imagine Dragons, Brad Paisley, John Denver, Pentatonix, AC/DC, Phillip Phillips, Carrie Underwood, The Killers, Daft Punk, Johnny Cash, and so many more!

What do you like to do for fun when you’re not doing scientific research?

When I’m not doing scientific research I’m probably in the air or at the barn, as I have been learning to fly Cessna planes and working towards my private pilots license this past year. I have been riding horses since I was a year old and am currently eventing my horse, Chance, at training level so I’m out there six days a week! We just recently won our last event in Virginia!!

You’re headed off to college this fall. What do you want to major in? What are your career aspirations?

I am still undecided on my major, but I am leaning towards either Global Studies or something in the sciences. Career-wise I am looking for something that has good job prospects and is something I would enjoy!