Here’s another installment in our summer series, Meet the Worker Bees, where we introduce the undergraduate students, high school interns, and research technicians who make our research engine hum. Meet Hanna Moxley, a senior at NC State majoring in human biology, from Stanfield, North Carolina.

How did you decide to major in Human Biology?

I was freaking out when it was time to apply to colleges. At NC State you have to declare your major. I thought biology was really interesting in high school and so I thought, I’ll go in with biology. I’m glad I did – I love it! Biology was a good choice for me.

Describe what brought you to the Dunn lab.

The College of Science Honors Program wants you to do two semesters of research or be a teaching assistant. I chose to do research. It’s funny how I ended up in the lab – my mom reads Prevention magazine and there was an article in there where Rob Dunn was talking about biodiversity in the gut. My mom called me and asked, “Do you know this person? He works at NC State!” And I was like, “I actually do!” So I emailed Rob and he matched me with De Anna Beasley, a post doc in the lab. So that’s how I got involved with the research. 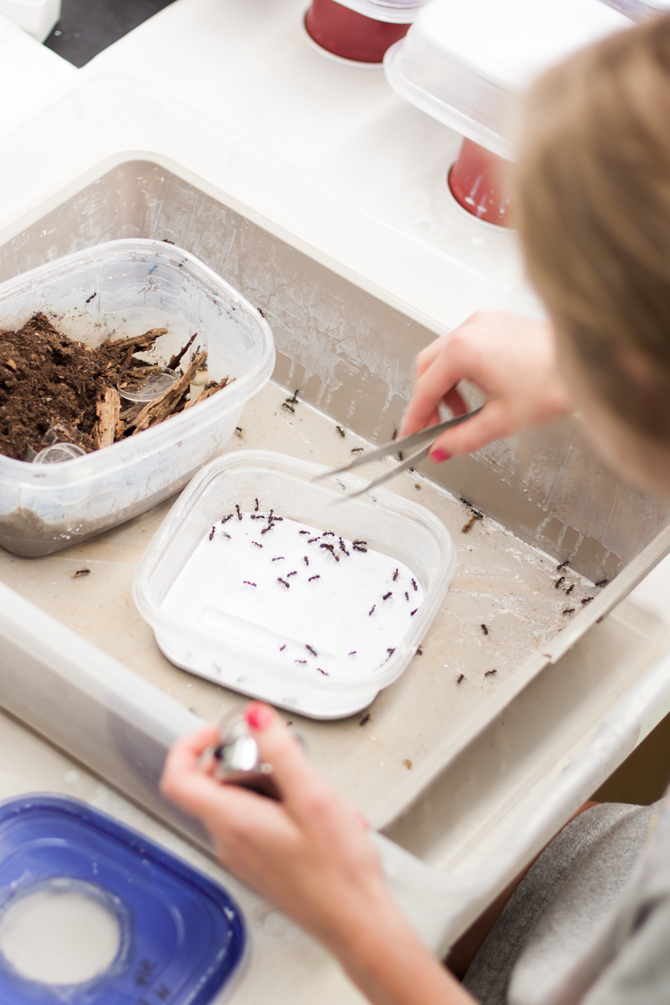 Tell us about the project that you’re working on in the lab.

For my honors project I am working with ants and giving them different diet treatments. We’re going to feed the ants artificial sugar and natural sugar diets and see if it affects their response to an immune assay. We test ant immune responses by sticking a little filament in the ant. You give the ant a few hours to respond to it and then you remove it. It will turn dark because the ant’s cells attach to the filament; if it’s dark you know the ant had an immune response (it’s called encapsulation). So that’s how we’re testing if the sugars affect their immunity.

Yes. I’ve been doing that a lot lately! It’s really hard – it’s all under the microscope and the filaments – I can’t even describe to you how small they are – and they’re clear, so you can’t really see them.

What is the most interesting aspect of working in the lab and what surprised you the most?

I knew nothing about ants before I came here. I’m a human biology major – so I know all about humans. But, everything I’ve now learned about ants is really interesting. I have really come to appreciate them. The most interesting thing is being out in the field and seeing the social aspect of them. De Anna and MJ Epps (another post doc) have been teaching me about the ants, too. To be more specific: they move around their little larvae; they’re always carrying them around and they pile them in places, which I think is cool.

Do you think there are any similarities to humans and ants?

Do you listen to anything while you’re working?

Not usually. I did today while I was burning holes in the plastic lids; we use a lot of plastic containers for keeping our ants in the lab. I normally listen to country music.

I like to shop and play tennis. I also hang out with my boyfriend. I like to plant things. I just recently got into it. It’s not full-out gardening, but I like to grow seeds and stuff – I have a good window in my room that gets sunlight, so I’ve been doing that.

What are some of your career goals?

I started out wanting to do something in the medical field, like be a P.A. (physician’s assistant) or a doctor. But now I’m really interested in nonprofit organizations, and I was even thinking about minoring in it. I’ve taken a lot of classes on nonprofits and I definitely want to work in nonprofits and maybe get a Master’s in Public Health and combine that with nonprofit work.

If you could give some advice to an incoming freshman into college, what would you tell them?

Get involved right away in something you might like. You might have to try something before you actually find out what you like. I was in a pre-health club and it was a really big club but I wasn’t getting a lot from it, so I stopped going. I found a service sorority that I really like. I’m not involved in a ton of things, but I’m involved in a couple of things that I really put all my time into. It’s alright to try something and then quit it because it’s not doing anything for you.