The Wild Life of Chimpanzee Nests

We share a lot with you, dear readers. Some might say too much (ahem, the plight of our own armpit bacteria, for example). Yet believe it or not, we don’t share quite everything. Sometimes we’re working behind the scenes, out of the public eye, cooking up a new project, developing a nugget of an idea or cultivating a collaboration. Sometimes it takes awhile to get these new things organized, to gather all the ingredients, to slowly bring the collaboration or project to a boil, to get an idea to a stage where it’s ready for public consumption. It may take some time, but rest assured, when it’s ready, we’ll let you have a taste.

And so today we’re excited to hand you a spoon and let you in on a collaboration we established last year with Adriana Hernandez-Aguilar and Fiona Stewart of the Ugalla Primate Project in Tanzania. Adriana and Fiona and their team of field assistants in the Issa Valley of western Tanzania bring a wealth of experience in biological anthropology and chimpanzee ecology and behavior. We bring the technical expertise and know-how for collecting and identifying the arthropods and microbes that live in the homes of the chimpanzee’s closest evolutionary cousins, ourselves. Together, we’re studying the microbes and arthropods that live in and around chimpanzee nests.

In the guest post below, Adriana reports directly from the field, taking you into the forest, in quest of chimpanzee nests:

A strong wind has been blowing all night, noisily moving the plastic of our tents. It is still pitch dark when we come out of our tents, except for the thousands of tiny lights coming from the stars. There are few things as beautiful as the sky of the African savanna. We get our breakfast of rice and beans and hot tea or coffee. We pack more rice and beans to eat in the field and two liters of water. It gets very hot during the day in this part of the year. After getting ready, the light comes quickly, as it does close to the equator, filling the air with the songs of birds.

We have two teams working for this project. One has left an hour and and a half ago  in search of fresh beds (also called nests) that the chimpanzees may have vacated just now. The other team, my team, will go to a nest site that was found two days ago. We begin walking on the path and the sound of the sticks that help us hike the very steep hills hit the ground with a rhythmic sound. We see a troop of baboons, still lazy from waking up. We realize it is not troop A, which is already partly used to our presence, when they begin running away from us. The miombo woodland is especially beautiful in the early morning light. At this time of the harsh dry season many trees are still bare, but others have begun to get new leaves, turning the woodland into lovely shades of red, orange, brown, green and ocher. 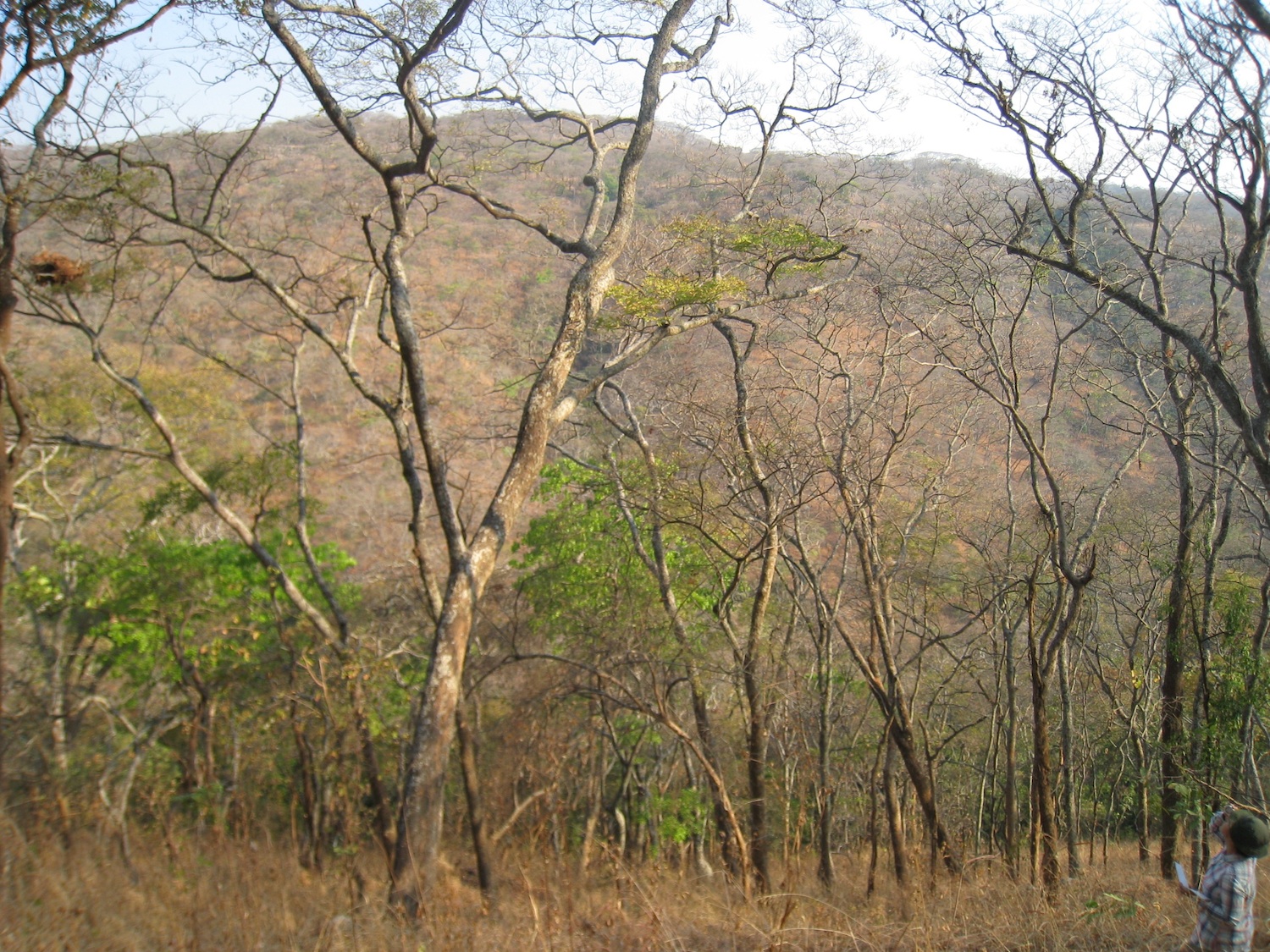 The open vegetation of the miombo woodland.

We then descend from the plateau down the steep hill, almost sliding on the dried leaves covering the ground, and reach a gallery forest. The contrast it offers with the open vegetation of the miombo woodland is almost unbelievable. It is as if you have suddenly entered into another world: a fresher world of evergreen trees with high dense canopies, moss and no grass on the ground. The streambed is almost dry, with only one very thin strip of water running on one side. We use the streambed as a path, jumping from rock to rock, some rocks so big that we have to climb them, using our hands too.

One hour later we reach our destination. There is a huge fig tree in this spot (a species called Mlumba in the local language) that has been bearing ripe fruit for quite a long time now. Our field assistants call it the hotelini, or restaurant. It has so many fruits that it can feed a large party of chimpanzees for several days, as well as, of course, many other animals such as monkeys, birds and squirrels. The chimpanzees, though, do not exclusively eat these figs through the day. They crave variety and are willing to walk far away, several kilometers, to eat many other species. However, we expect to have some chimpanzees of the community make at least one visit to the fig tree per day. We locate the nests our field assistants found two days ago, when fresh feces and urine on the ground, directly underneath the nests, indicated that the apes had left them that morning.

Every chimpanzee, after weaning, constructs a new nest almost every night. The goal of our research is to understand why they do this. Why don’t the chimpanzees invest more time making a better structure that they can reuse over and over again, a strategy more similar to the practices of nomadic humans? 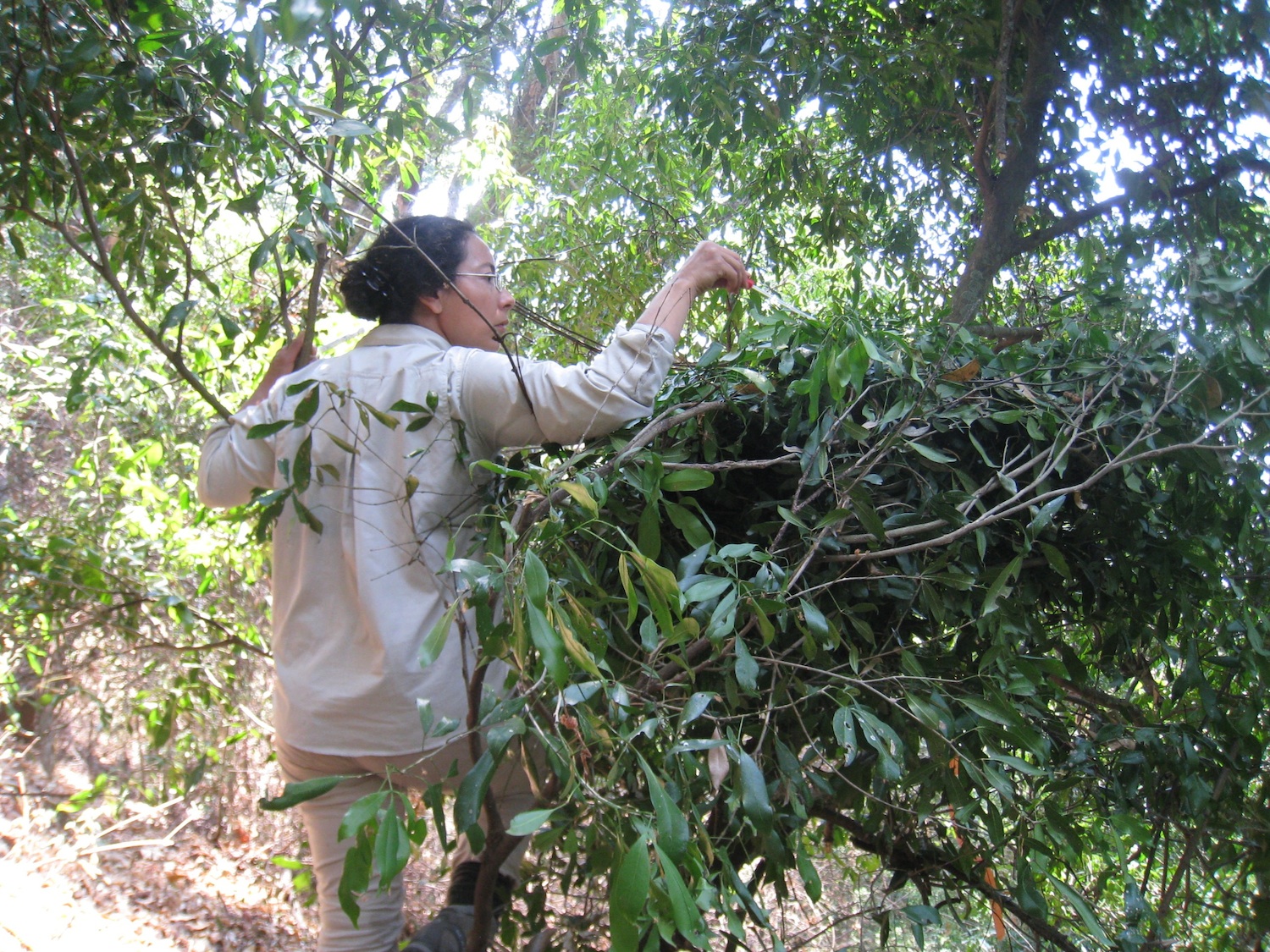 Adriana up close to a chimpanzee nest.

We know now, from our research in Issa, that chimpanzees repeatedly go back to the same sleeping site (a part of the landscape where several nests are close together in the same and neighboring trees) and sometimes they reuse old nests although mostly they build new nests. Why do they go through the extra work of making a new nest on most nights, often located right next to a usable old nest?

Researchers have hypothesized that new nest building might have something to do with health. Chimpanzees defecate when they wake up in the morning, aiming outside the nest. If the chimpanzees returned often to the same nesting site to sleep, the ground would be littered with feces and thus would be a place concentrated with parasites or pests. The apes could also leave parasites that live on them in the nest that, in turn, could infect the next individual who uses the nest. Or perhaps, once the chimpanzee leaves the nest, insects, arthropods or microbes establish there, making the nest unusable, a risk to comfort or even health. These are hypotheses we’re intending to test in our study.

We put down our heavy backpacks and start preparing materials to collect the samples. We swab the ground below the nest first to obtain a microbe sample (just like people do for Wild Life of Our Homes) and then we use a special hand-held vacuum to sample the arthropods on the ground. 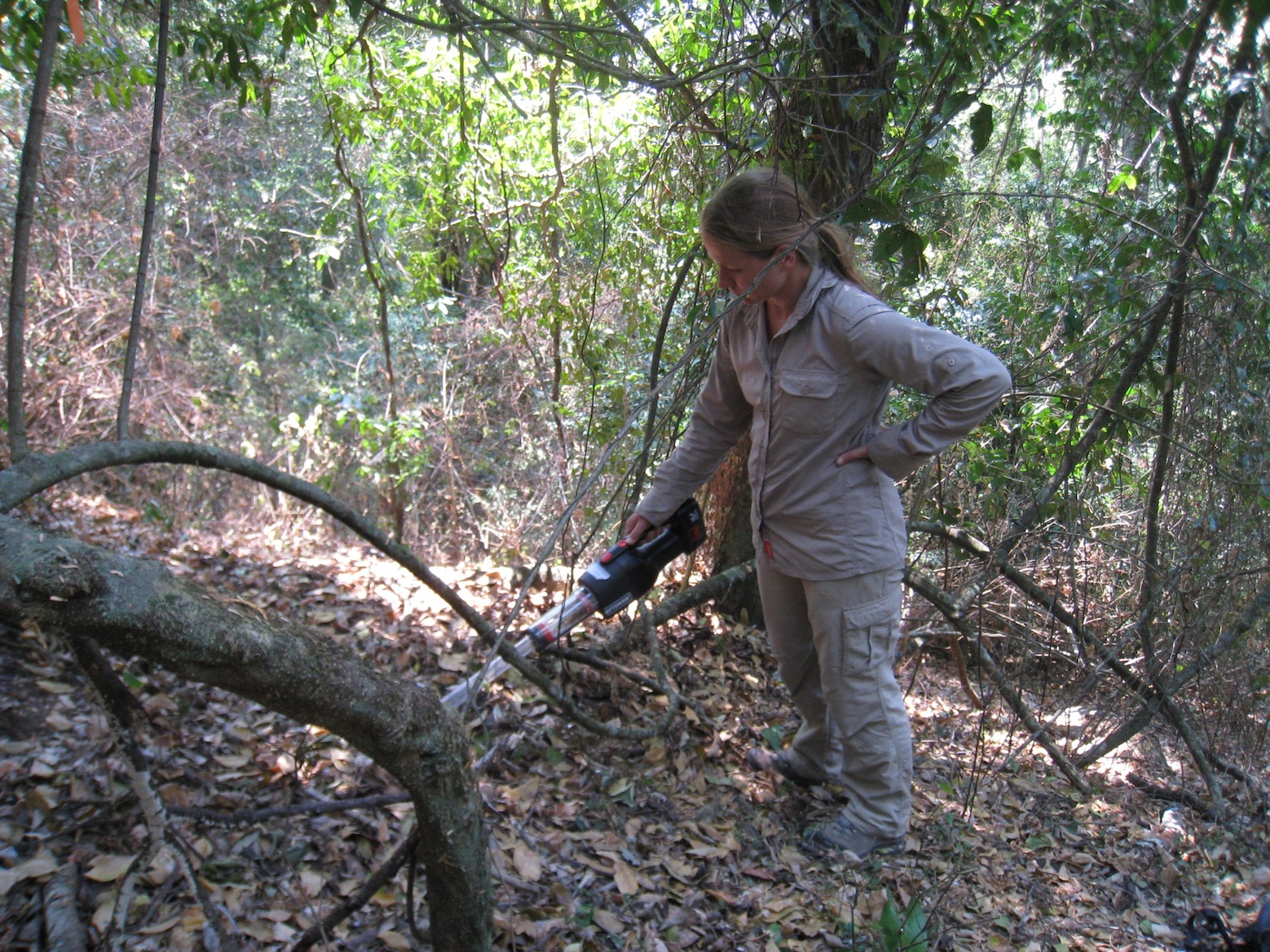 Fiona sampling arthropods on the ground.

Now it’s time to go up to the nests! They are more than ten meters off the ground and we must use climbing equipment to go up into the canopy. We repeat the collecting procedure on the nest and on a nearby leafy branch that was not used by the chimpanzee to build the nest for comparison. 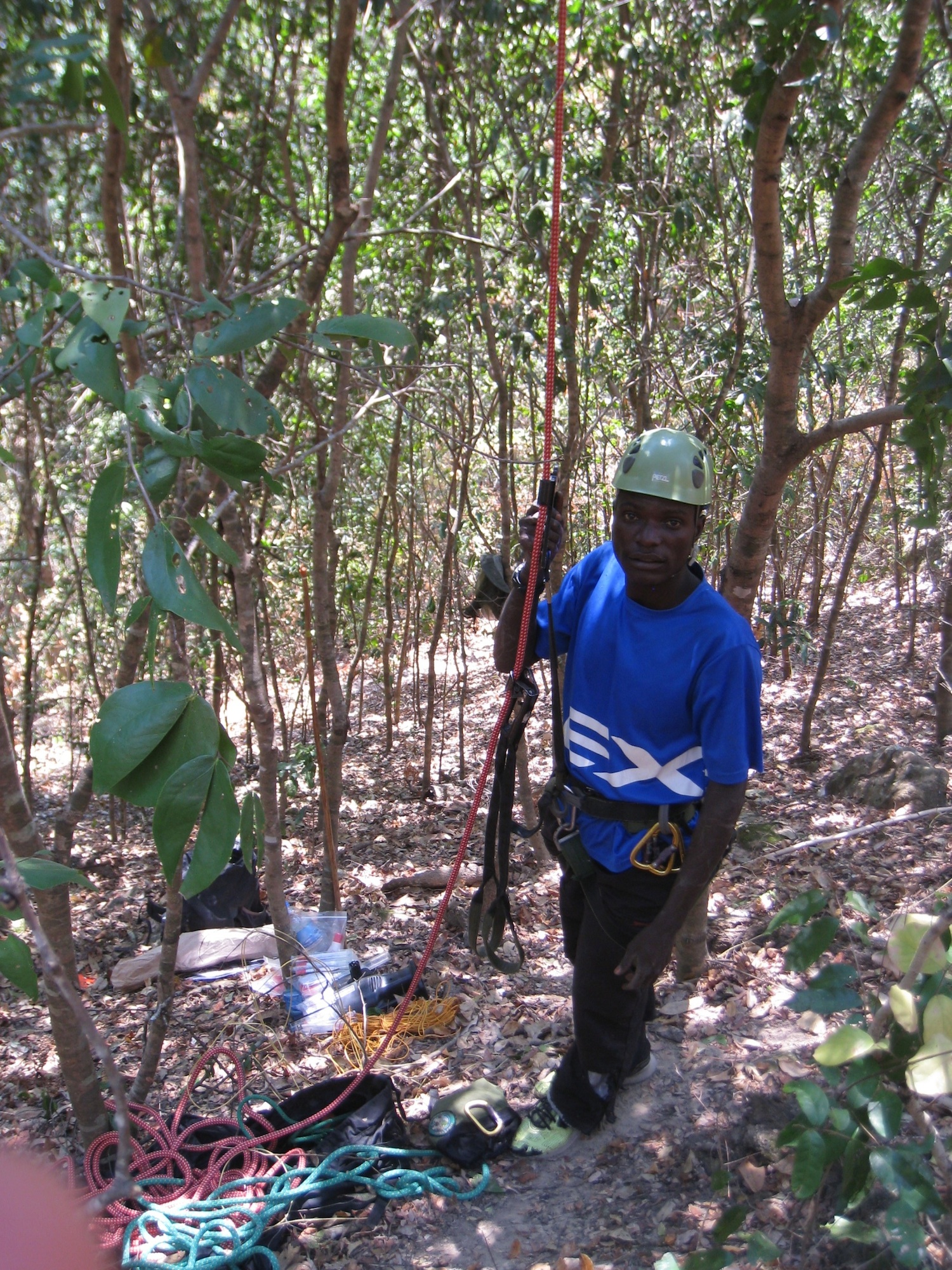 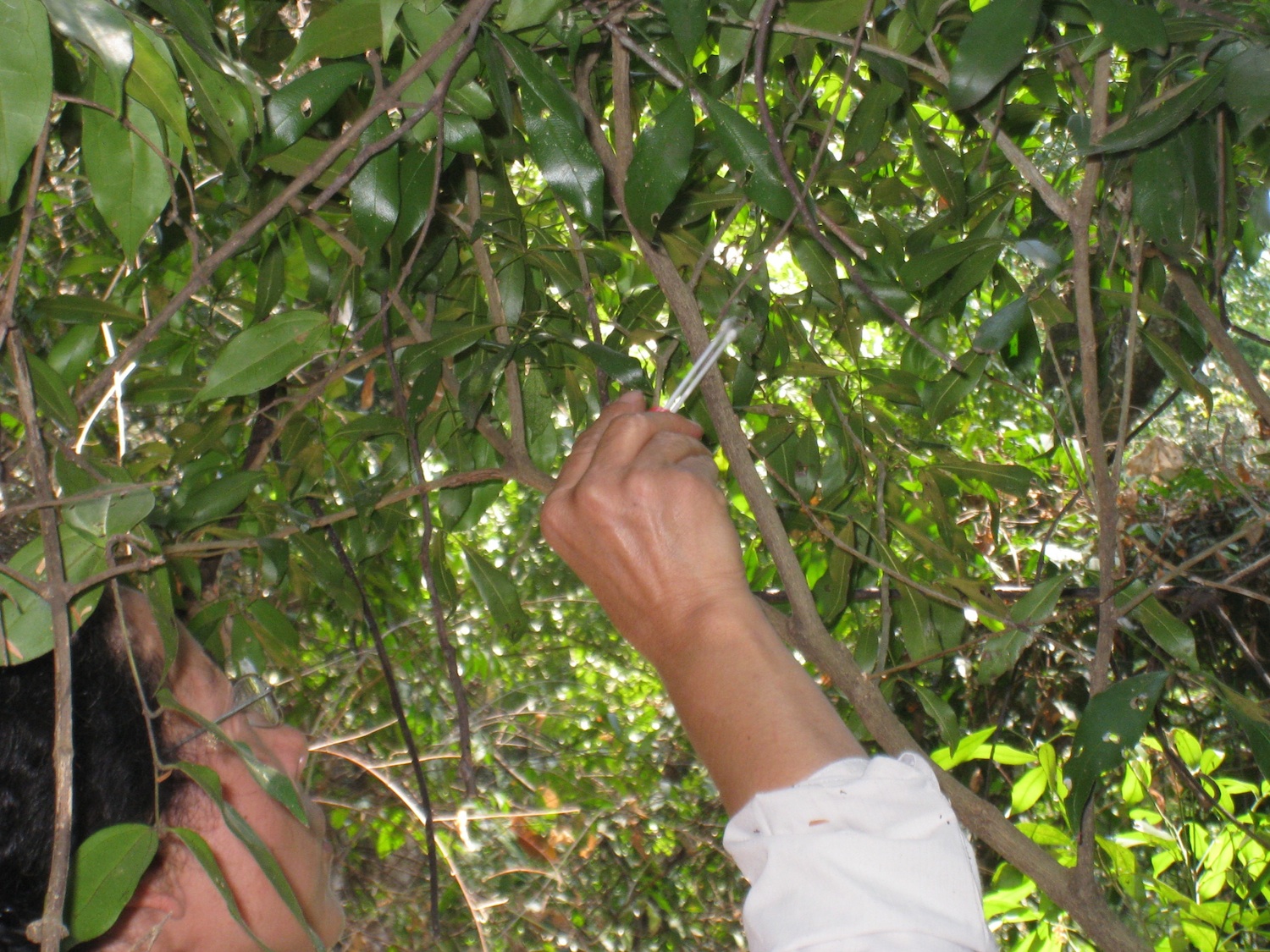 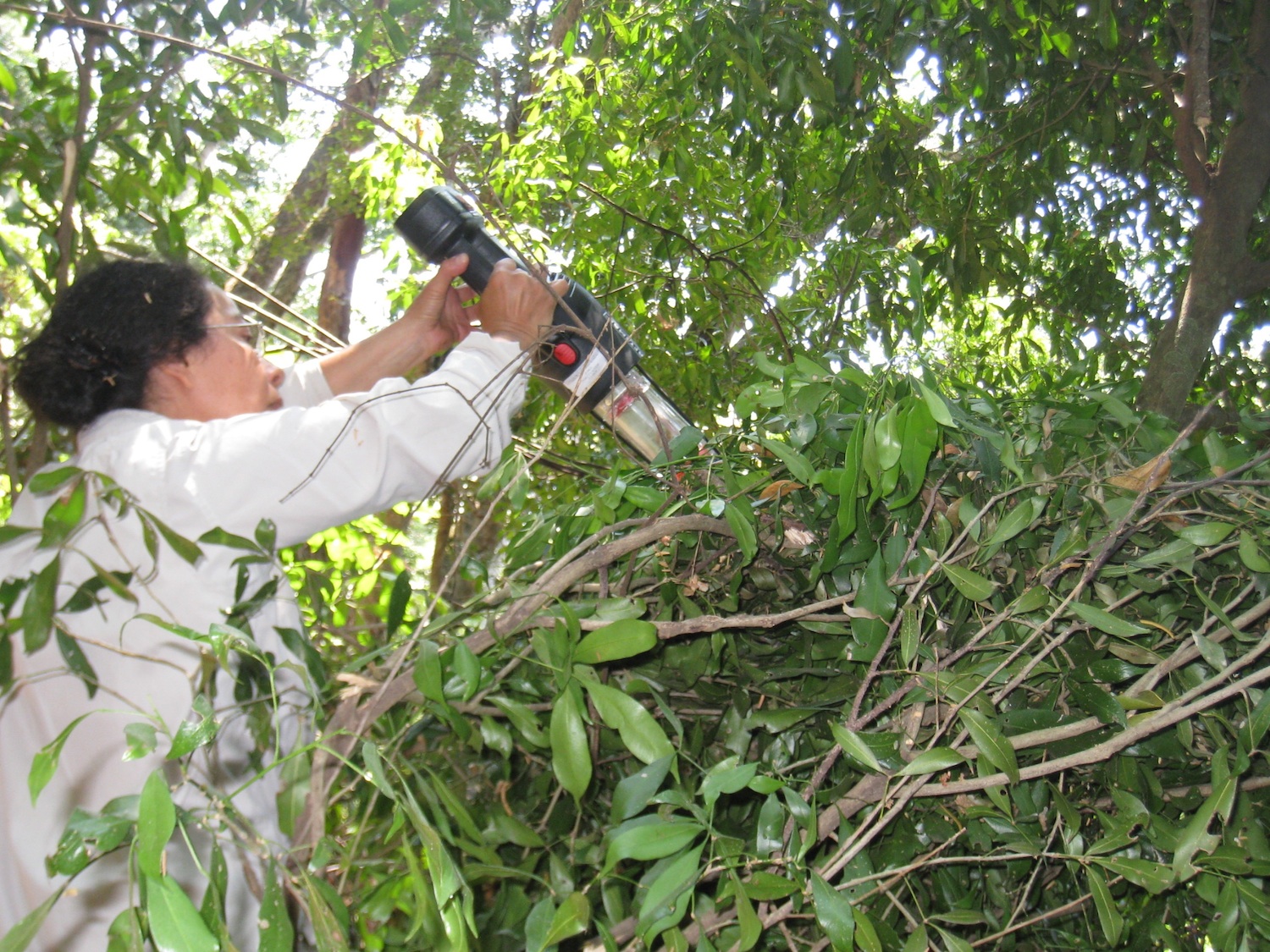 Adriana vacuuming a nest for arthropods.

By the time we complete sampling all the nests in this nest group, it’s already 4:00 pm! We re-load our backpacks and begin the long hike back to camp. This time a troop of redtail monkeys noisily follows us in the canopy as we walk along the streambed. We exit the gallery forest into the woodland and climb the very steep hill. We hear a leopard vocalizing across the gallery forest, where we just emerged. We arrive at camp and after a short break head into our field lab to process the samples, placing some in ethanol and others in the freezer. Here they will wait to be shipped to North Carolina for analyses. 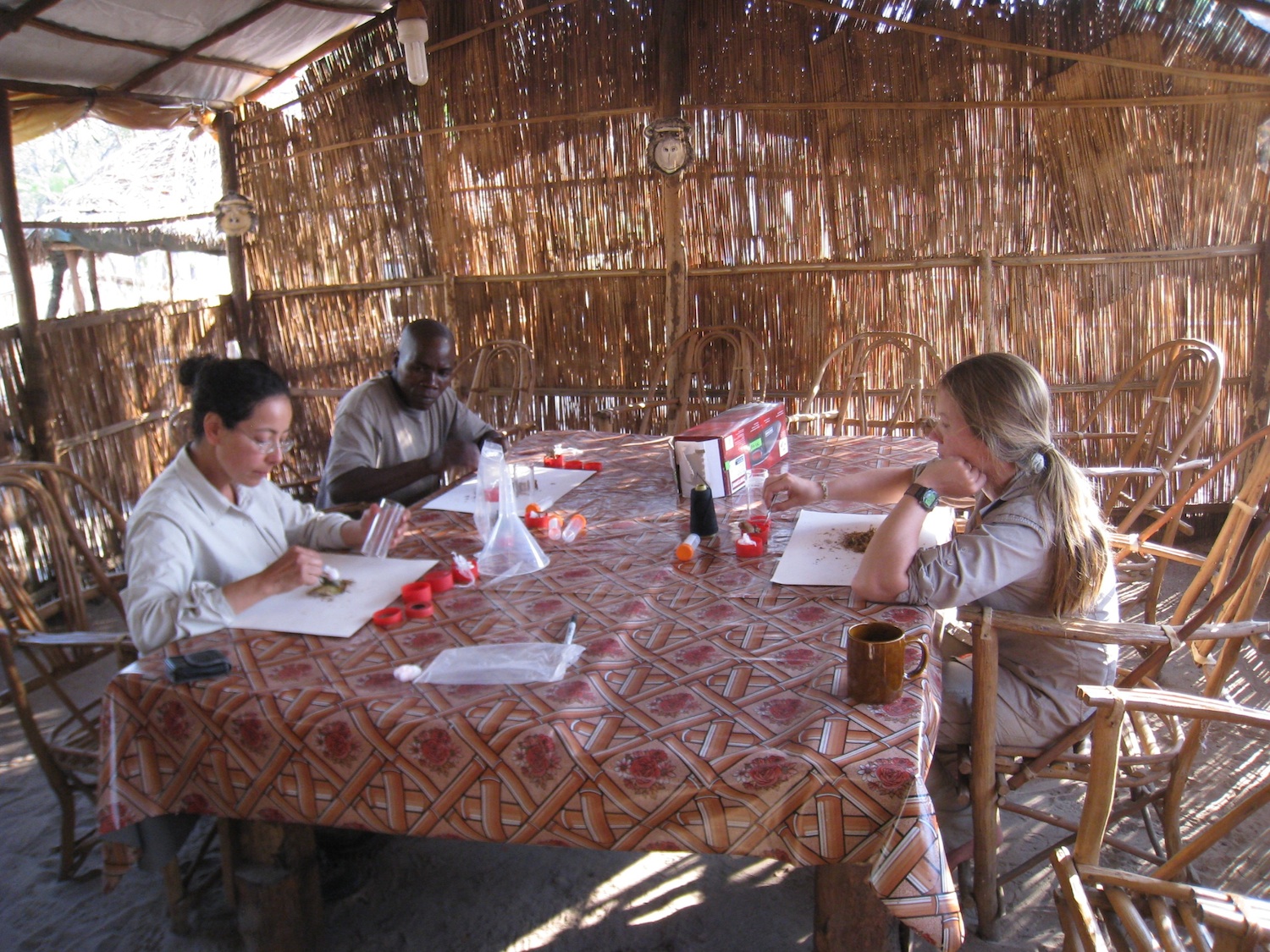 In the Field Lab: Adriana, Mlela and Fiona looking through vacuumed material for arthropods.

To learn what arthropods and microbes exist in the nests of chimpanzees is interesting because these apes are, together with bonobos, the closest living relatives of humans. We shared a common ancestor only about 6-7 million of years ago, a blink of an eye in evolutionary history. Do chimpanzee and human beds still carry some of the same arthropods and microbes inherited from our last common ancestor? We cannot wait to find out! 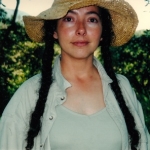 Adriana Hernandez-Aguilar is a biological anthropologist, based at the Centre for Ecological and Evolutionary Synthesis (CEES) at the University of Oslo, Norway. She has been working in Ugalla, Tanzania, since 1998, using ecological and archaeological techniques to study savanna chimpanzees.