Before They Were Scientists: MJ Epps

Mary Jane Epps (MJ) is a naturalist, biologist, entomologist, fungi-phile, old-timey music player, urban homesteader, self-proclaimed luddite, weaver and all around information gatherer. It’s fascinating to sit down with her and talk about any topic imaginable; by the end of the conversation you will come away with both new knowledge and a drive to research whatever you spoke about further, fueling future conversations. It actually doesn’t come as a surprise that MJ had such an incredible childhood – lots of time spent exploring and testing her survival skills outdoors with her siblings… and trying to start fires during recess.

Lea: Were you cool?

Was anyone cool? Tell us what made you a cool student in your middle school.

As far as I could tell kids everyone else thought “cool” were the ones who picked on other kids the most. Other than that, coolness was definitely a black box from my perspective.

What was your biggest worry in middle school?

Definitely getting picked on, and losing friends to the cool kids.

“…I was obsessed with trying to learn how to start fires with flint and steel.”

What was lunchtime like for you and your friends?

Okay, this will really reveal how weird a kid I was! All through my early teenage years I was obsessed with trying to learn how to start fires with flint and steel. I remember countless lunches where I used to sit outside and practice my sparking techniques with my flint and steel set!

Did you get into trouble at school?

Never, unless another kid picked a fight.

Did you used to feel lonely? Did you know anyone like yourself?

Oh, I was definitely a pretty lonely kid in middle school. Middle school seems to be the time when kids can really get punished for anything that sets them apart from the herd, and I was never one to conform to things that were trendy. Once I got to high school it was completely different–most people had grown up enough to actually respect individuality in their peers, and I had a fantastic bunch of smart, quirky friends who had plenty of their own unusual interests.

“…I had a fantastic bunch of smart, quirky friends who had plenty of their own unusual interests.”

Why? What made those subjects so special?

I had an absolutely marvelous English teacher for 7th and 8th grades. English was one class that my school had sort of an honors section for, which meant that the material was much more interesting.

My English teacher placed a big emphasis on learning Latin and Greek word roots, which is something that I really value. Having that early foundation in word roots has actually really helped me remember scientific names now that I’m a biologist.

“I used to spend pretty much all of my free time running around in the woods on my parents’ farm and exploring.”

Did you play an instrument? Did your parents have to force you to practice or did you do it on your own?

I played violin from 3rd grade on, though I quit taking lessons after mid high school because I wanted to spend more time learning natural history (no joke!). My parents used to have to force me to practice all the time! I liked the violin okay, but I wasn’t particularly inspired by it until I started playing fiddle. 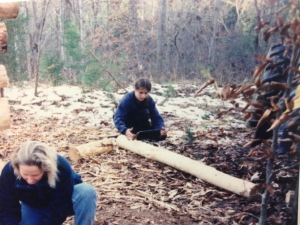 I used to spend pretty much all of my free time running around in the woods on my parents’ farm and exploring. I was always a fairly obsessive kid and during middle school I became perhaps a little too interested in learning wilderness survival techniques. I used to do all sorts of crazy things! One of my favorite activities was to build natural shelters way out in the woods and try to insulate them with leaves sufficiently enough to sleep in them without a sleeping bag. I remember a number of nights where I absolutely froze out there. I also got really interested in edible wild plants, and used to bring home and prepare all sorts of ghastly things that I would then feed to my parents. They were remarkably good sports about it. Some of the ‘edible’ plants I harvested were really pretty foul, though at the time I did a pretty good job of convincing myself that they were delicious.

[Above you can see MJ building a log cabin on her family’s property for her sister.]

Did you have any pets?

We had some wonderful dogs over the years, and always a nice herd of cows (though those weren’t exactly pets). I also used to catch toads and keep them for a few weeks before letting them go again. I used to feed them by tying a little piece of meat to fishing line and jiggling it around like an insect to catch their attention. It was really fun!

“…I realized that being a ‘wilderness survivalist’ wasn’t really a viable career option,”

Once I realized that being a ‘wilderness survivalist’ wasn’t really a viable career option, I started thinking I might want to become a botanist since I loved identifying wild edibles. In high school I wanted to be a lichenologist.

Science was a pretty natural transition from my goofy wilderness survival craze. I started getting more and more into plants through foraging for wild edibles, and that shifted into a strong desire to learn more about the biology of plants in general. From plants I got interested in learning about the biology all sorts of other organisms by the time I got to high school.

What was science like for you in middle school?

What made science interesting to you, since you obviously didn’t give up on it?

I was constantly inspired by the outdoors, but never particularly inspired by classroom science until high school, when I did have some wonderful experiences.

Take it easy and don’t worry, it will be over soon!

That I actually have a boyfriend.

What did your parents do?

They were both university faculty in economics, though my father also worked very hard as a farmer at the same time.

How often did you say you were bored as a kid? What did your parents do when you said this?

I wasn’t bored very often as a kid, with so many things to do on the farm, but whenever I did complain about being bored my folks used to tell me to go run around outside. We never had a TV in the house.

“The farm I grew up on had a number of outbuildings, including a huge old chicken coop that my siblings and I converted into a museum as kids.”

What did you collect?

This is hilarious in retrospect, but I was really interested in learning about animal signs and for a while actually had a scat collection. I would carefully dry out all my samples and put them in little bags labeled with their species. I kept them in a shoebox under my bed for years! (I used to joke that if being a botanist didn’t work out for me I would be a scatologist.) I also made a lot of plaster casts of different animal tracks around the farm and collected those. The farm I grew up on had a number of outbuildings, including a huge old chicken coop that my siblings and I converted into a museum as kids. The building had a whole bunch of long shelves along one wall (originally constructed for nesting chickens) and we had all sorts of little labeled exhibits of stuff we would collect from the farm and elsewhere. We had a whole range of things from rocks and minerals to animal skeletons and archeological artifacts that we would find out in the woods. It was pretty neat.

Did you ever feel that you were somehow different from other children?

Well, I had a lot of very peculiar interests that I was very dedicated to as a kid, though what those interests were shifted through my childhood. I always used to wish I had another kid who was interested in similar things that I could learn with.

How would you hope that middle school is different for your own children or the current generation?

In many, many ways. Mainly I hope that kids wouldn’t be so mean to each other, and that classes would be more inspiring.

“Mainly I hope that kids wouldn’t be so mean to each other, and that classes would be more inspiring.”

What was your hair like? Did it change throughout the years?

It hasn’t changed at ALL.

Dr. Mary Jane Epps is a post-doctoral scholar in Rob Dunn’s Lab at North Carolina State University. She is currently exploring the ecology of insect communities and how they are associated with human homes. Sometimes she can be found jamming with famous scientists or busking in Brooklyn.