How to Beat Flooding, Ant-style

With unpredictable weather patterns resulting in monsoon-like storms and as warming seas swell, swallowing shorelines, more and more folks find themselves underwater or sinking fast. We’re not the first animals to find ourselves suddenly living the life aquatic. Unlike us, ants have been dealing with flooding for thousands of years, and they’ve evolved a few behaviors to help them stay high and dry. Here are the top five techniques ants use to keep the water out. 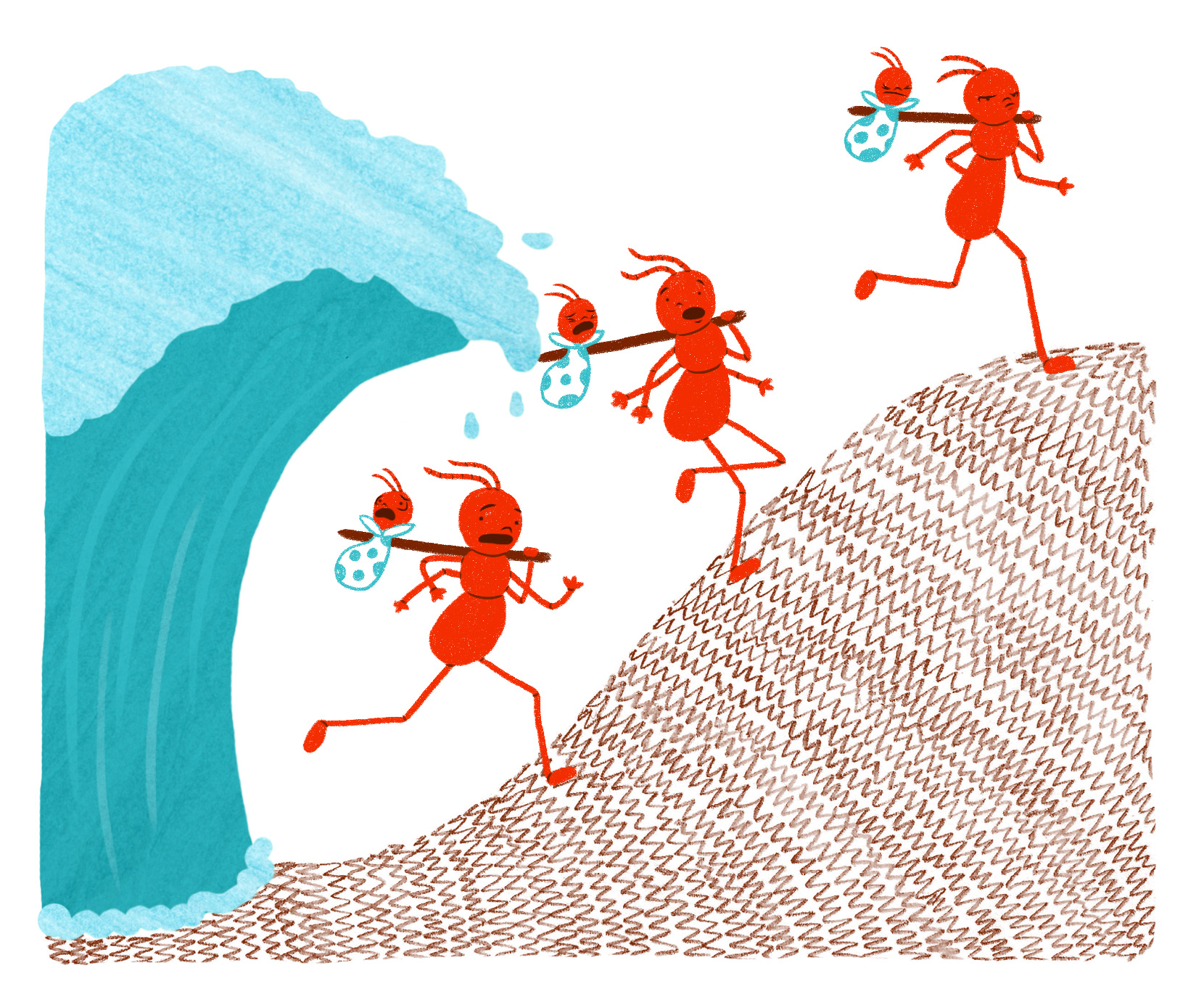 5. Divide and conquer. In Argentinean flood plains, anybody who wants to stick around needs to get creative to deal with constant rising and receding waters. While many species wipe out in the wet, a little extra irrigation never bothers Argentine ants (Linepithema humile). They just move. Some ant species spend years constructing their nests, with intricate hallways and networks of tunnels. Not Argentine ants. They’re the hobos of the ant world and will pop their tent under any available rock or leaf. Not enough space? They’ll split up and make two nests, three nests, four or more. When waters rise, they pack up mama and the babies and wagon train it on up to higher ground. 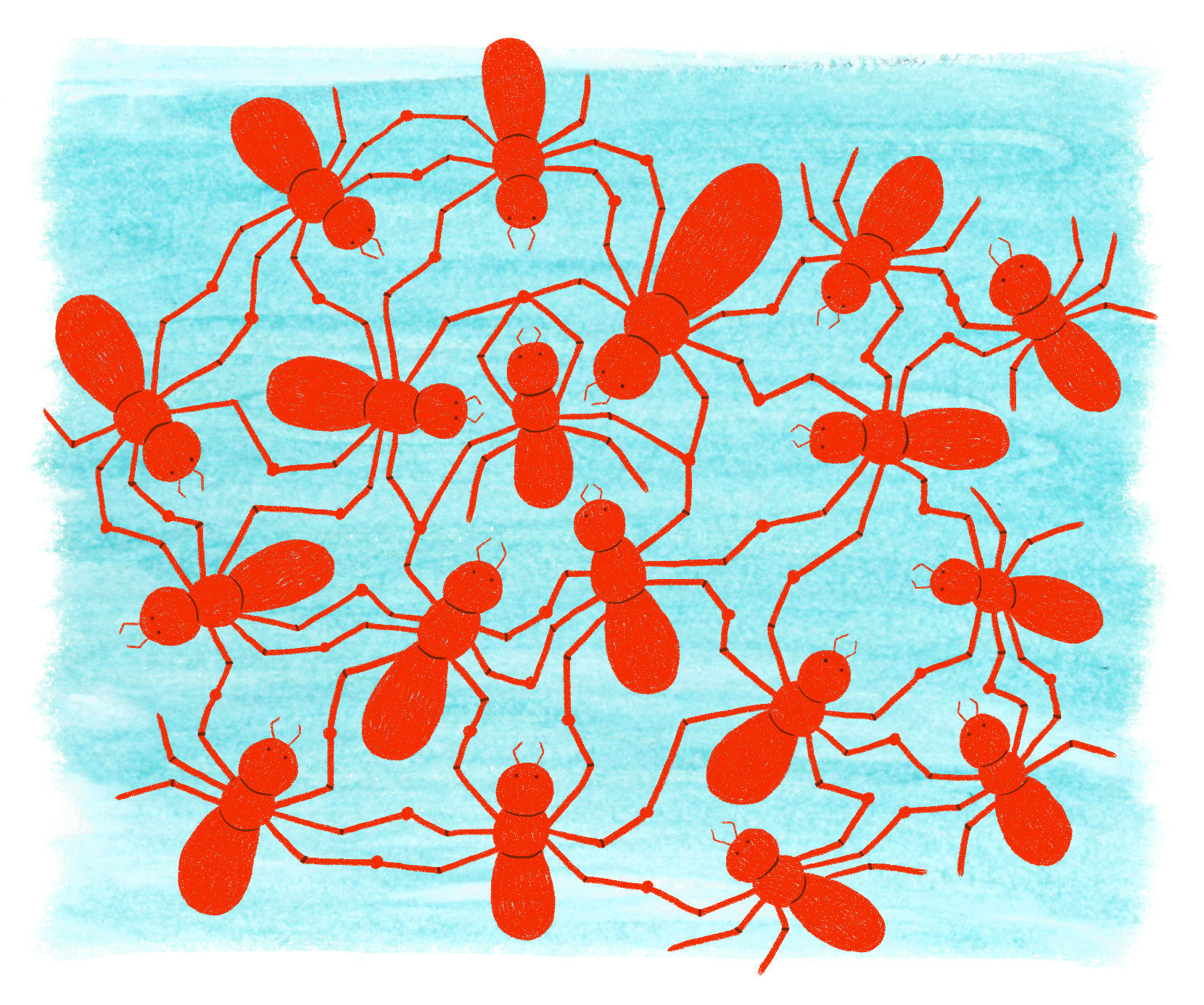 4. Tom Sawyer it. Fire ants (Solenopsis invicta) hail from similar flood-ready roots as Argentine ants, but they handle rising tides with a different level of aplomb. They make rafts, out of their own bodies. Individual fire ants make terrible swimmers, but as a colony, well…

When a colony of fire ants gets dropped in water it spreads out flat across the water’s surface like a pancake. A bottom layer of workers grab on to each other with their feet and mouthparts, weaving their bodies into a pattern similar to the weave in man-made waterproof fabric. The grip between these sisters is so strong it would be the human equivalent of a man dangling about 24 Volkswagen Beetles from the roof of a building.

The rest of the colony wanders around on their living raft, floating along until they hit dry land. Ants on the bottom layer don’t drown because they form air bubbles around their waxy skins that help them to breathe and stay afloat.

These living rafts can move like a fluid and instead of getting snagged on branches these rafts engulf obstacles and keep on keepin’ on. Fire ant colonies can survive for months adrift, surfing around until they hit dry land, where they unload everybody, sun dry and make a new home. 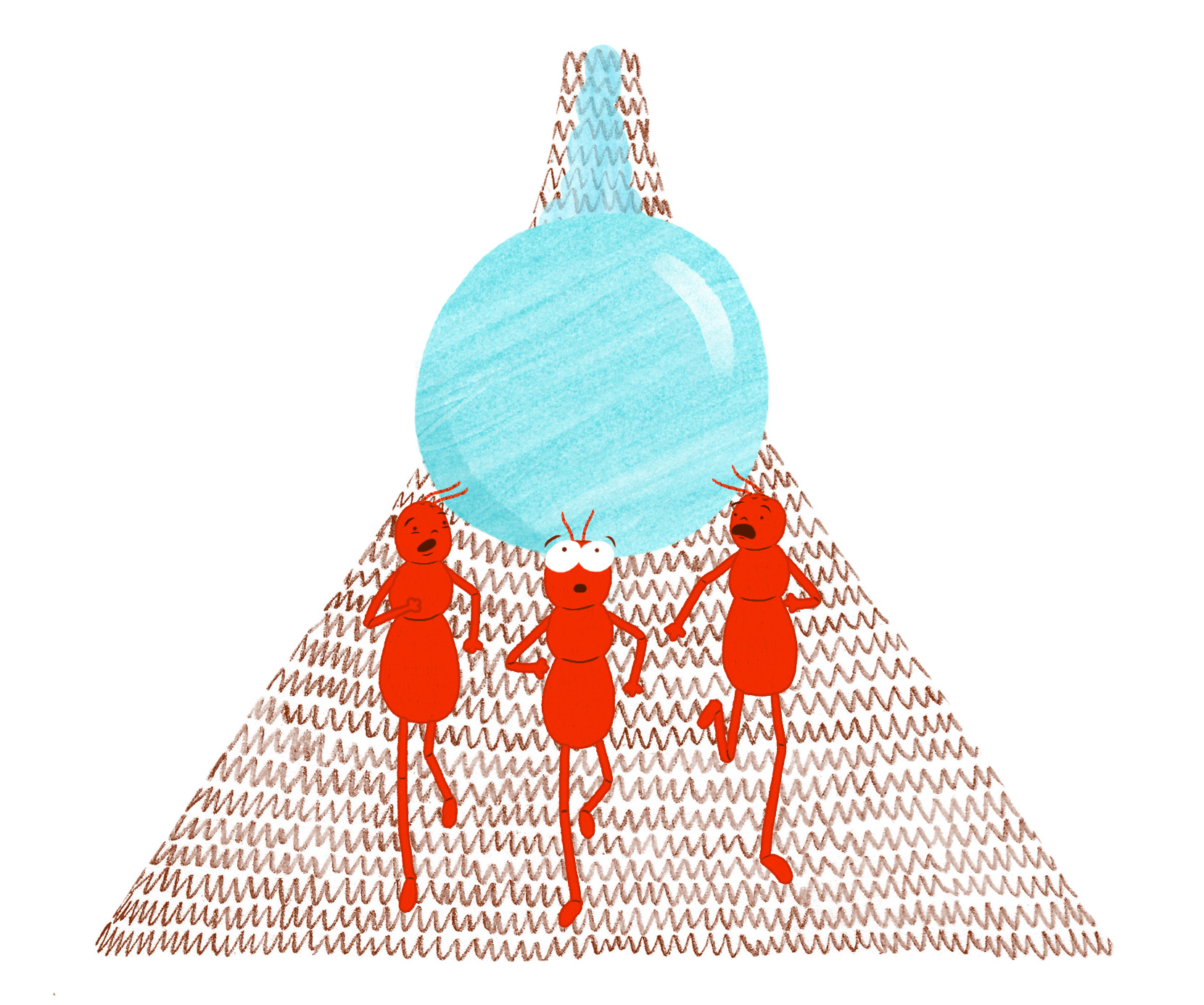 3. Bail it out. Ah, rainforests. Species-lush wonderlands. With plenty of rain. While rain keeps rainforests flourishing, raindrops can terrorize tiny animals living in trees. Imagine you’re a happy little ant wandering around a tree trunk, when all of a sudden Indiana Jones-like boulders of water come rocketing down from the sky at you. Not cool. To make matters worse, some plant ant species, like Cladomyrma spp. and Tetraponera sp. gnaw little chambers into plant stems and set up shop. When the rains come (which, in a rainforest is, like, all the time), a few drops of water can drown the whole colony. But have no fear! Plant ants figured it out. When workers find water pooling around their anty toes (we call ant toes tarsi), they get together and drink it up, filling their stomachs to the max. Then they hang their heads out the nest entrance and spit. 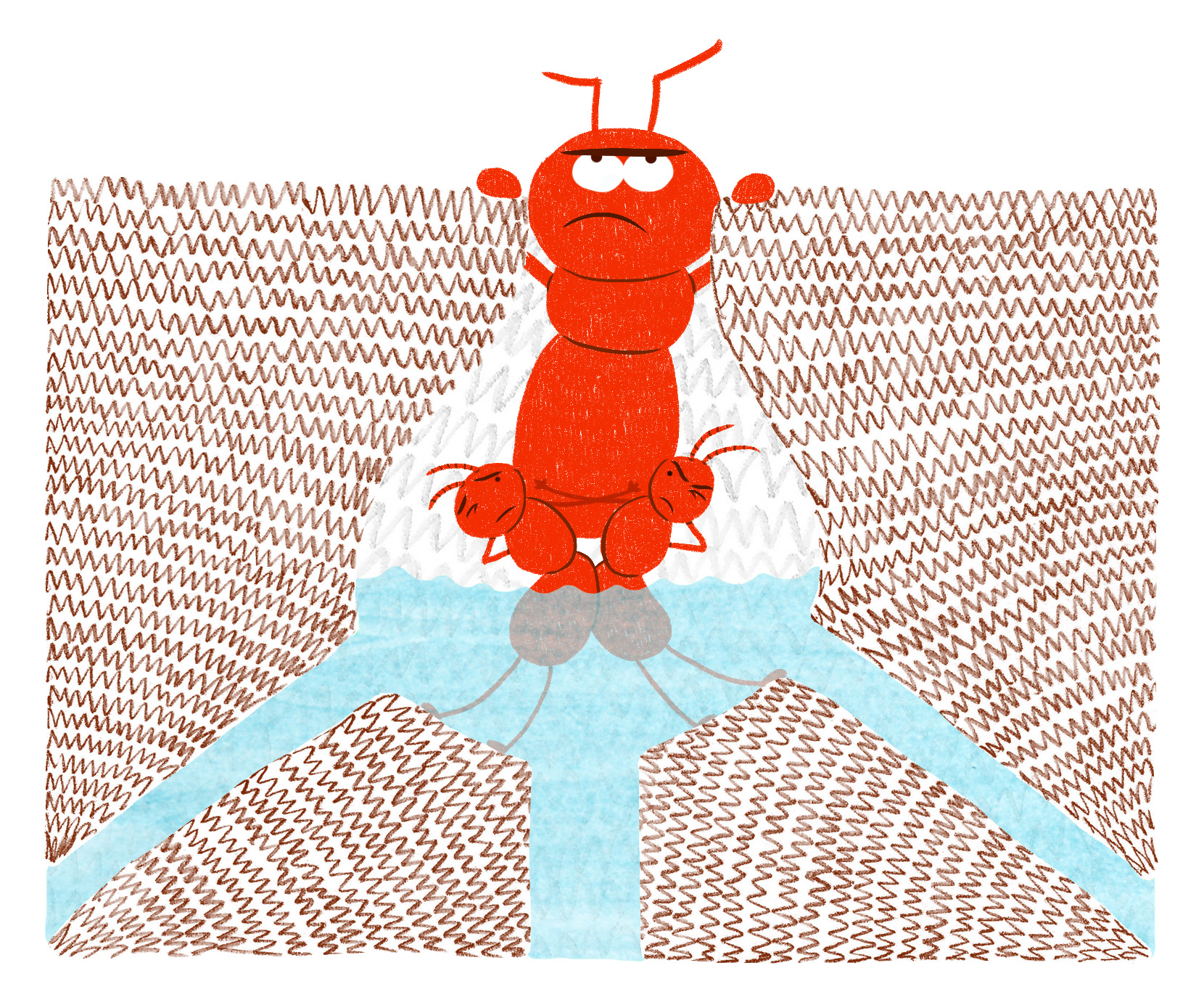 2. Block it, Blockhead. Not to be outdone, some bamboo nesting ants (Cataulacus muticus) have their own way of staying dry. When rains threaten, workers use their big flat heads to block the entrance holes of their nests.

But sometimes that doesn’t work. Water eeks in around their noggins and soaks their nests. Which is why this species gets two spots on the “Top 5” list. Their other anti-flooding adaptation, and the #1 way to stay dry if you’re an awesome ant species is: 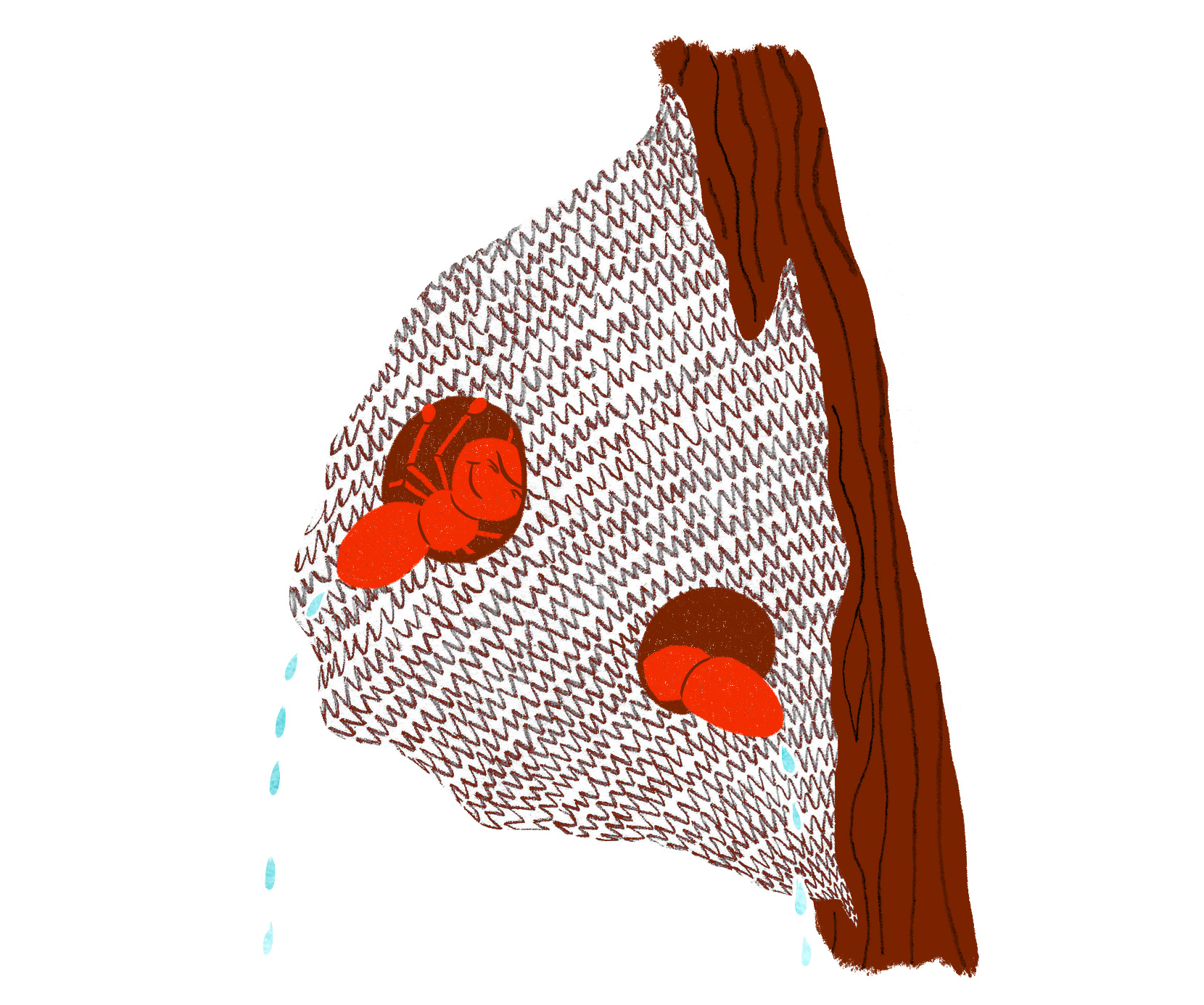 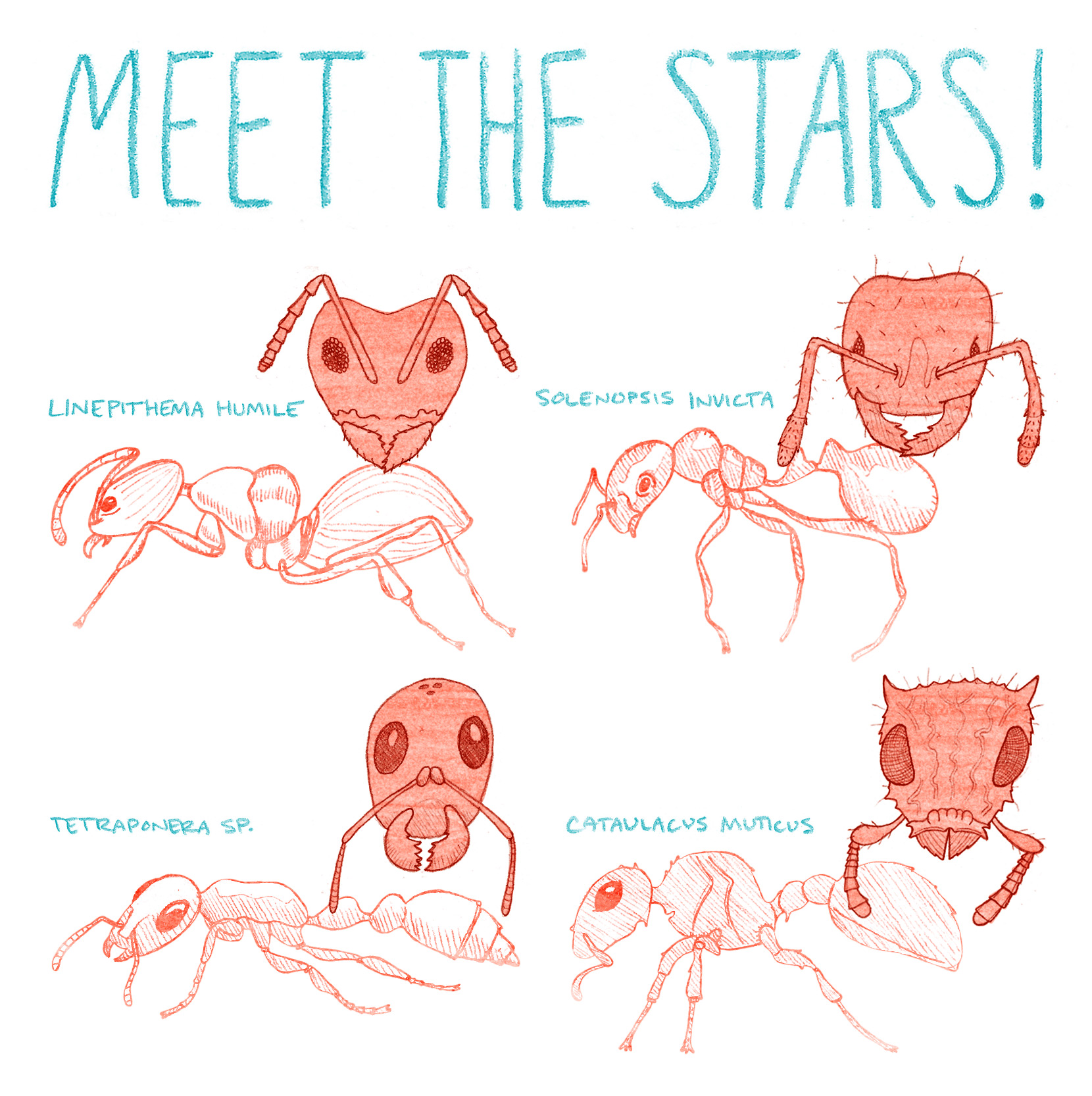 Christine Fleming is an illustrator whose work tends to have a whimsical feel with organic lines, delicate textures, and hidden details. She is currently writing and illustrating her first children’s book. You can see more of her work on her website, and follow her @might_could.

Dr. Eleanor Spicer Rice is an entomologist with a knack for telling good stories, especially about the secret lives of her favorite insects: the ANTS! She’s the author of the NEW (free!) eBook, Dr. Eleanor’s Book of Common Ants of New York City and is the ROAR in the graphics-driven science blog, Buzz Hoot Roar. Follow her @Verdant Eleanor.