How to turn any dataset into a glowing worm

A few decades ago gene expression, the process by which the code books of genes are turned into proteins, was invisible. It happened in every living thing, but where and when a particular gene was being expressed was a complicated secret nature was reluctant to reveal. Then came Martin Chalfie, who I recently had the great pleasure to meet as part of seminar at North Carolina State University (whereupon he told me this story). Chalfie was studying nematodes, those transparent little worms that dwell in soil, on skin and even in tap water, but are best known for their role as lab organisms. Chalfie studies the worms to understand biological universals, things all animals do, ways all animals work.

One day Chalfie was attending a seminar by Osamu Shimomura. Osamu Shimomura was reporting on a recent discovery; he’d found the proteins in a particular species of jellyfish that makes them glow (after grinding up and studying thousands and thousands of those jellyfish). Chalfie’s colleagues found this result to be of interest. They gave it the grumbling assent that in academia sometimes passes for enthusiasm. But, it seemed to Chalfie, this mere assent missed the point. Shimomura’s breakthrough was incredible. Chalfie went back to the lab and over hours, days, weeks and then, because nothing in science is really so quick as one might hope it will be, years, found the gene for that glowing protein and then figured out a way to molecularly duct tape it to other genes. When he did, he could see when and where those genes were expressed because the spot glowed! And since Chalfie worked on a transparent organism, that glowing was immediately visible. Chalfie had figured out how to see the body’s invisible elf work, gene expression (an accomplishment which would eventually win Chalfie, along with Shimomura, the Nobel Prize).

Ultimately, part of the success of Chalfie’s approach was that it allowed him to see a gene being expressed. But there was also something more. In looking through a telescope or a microscope, one sees a scene magnified. One can then look at the magnified landscape, be it the surface of the moon or the surface of a mosquito’s eye, and measure features that relate to some hypothesis of interest. What is different about the glowing proteins is that they do not magnify some heretofore scene in general, they just magnify the result.  The scene itself is interpretable in light of a hypothesis. To me this is a revelation bigger than just the elegant utility of glowing proteins. It is the revelation that an elegant visualization can simultaneously serve to show something that is otherwise invisible, test a hypothesis AND demonstrate whatever result that test of the hypothesis reveals. In other words, the proteins are a tool, science and art.

I was thinking about all of this both because of the visit and because I now find that one of the biggest single barriers in the fields of science in which I partake is “seeing and showing.” So what does one do? One approach is to seek out collaborations to improve approaches to seeing and showing in the context of particular problems. I note that in the case of the glowing proteins that a big part of the story was chance. Chalfie was working on an organism that is see-through and happened to see a talk about the discovery of the glowing proteins and their genes in jellyfish. He thought, “Oh, I could use that in nematodes and see where it is expressed!” Chance favored the prepared mind and the dude with the right model system. But my hope is that there is another approach. My hope is that it is possible that if we consistently gather people together whose focus is on visualization with those that focus on discovery then maybe we can increase the number of chances.

And so, starting this Wednesday, January 15th at 12:30 in 283 David Clark Labs in Raleigh, NC, we will begin to have “lab meetings” at which we attempt to come up with new ways to see and communicate science. My vision for these meetings is that, ideally, they include scientists but also painters, sculptors, educators, statisticians, bioinformaticians, jewelry makers and anyone else interested in engaging how we know and show the living world. My idea is that after some initial introductions we’ll move toward a model in which we have tables with big paper on which to draw, big computers on which to code and big jars of coffee from which to drink. The initial challenges we start with, which I list below, will be bounded by things we’d like to figure out for our own work but our idea is that if this works we will progressively expand our attempts. Our first challenges, or at least the ones I thought of while doodling during a talk (not Chalfie’s) were…

1-The relative diversity of different kinds of organisms in a home. We imagine our homes are barren. They are instead incredibly diverse, but how best do we  display this diversity. The figure below shows an ugly version of one idea I had (drawn early on during the talk). 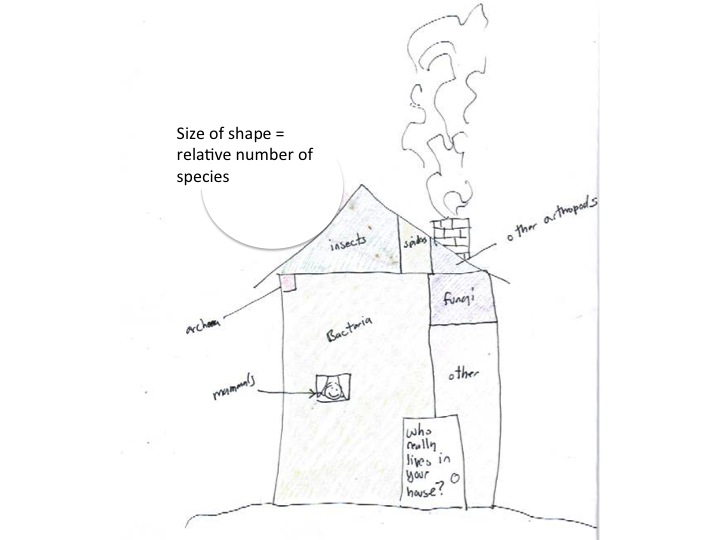 2-The extent to which only a tiny subset of the lineages of bacteria known from Earth are common on humans and other animals and that a subset of those common, symbiotic lineages, turns evil and become pathogens. Here is an even uglier sketch:

3-The biogeography of organisms living in, on and around the body of, say, a human. A human is like a continent, but with a more complex topography. The organisms found in different places (say an armpit versus a belly button) are VERY predictably different. 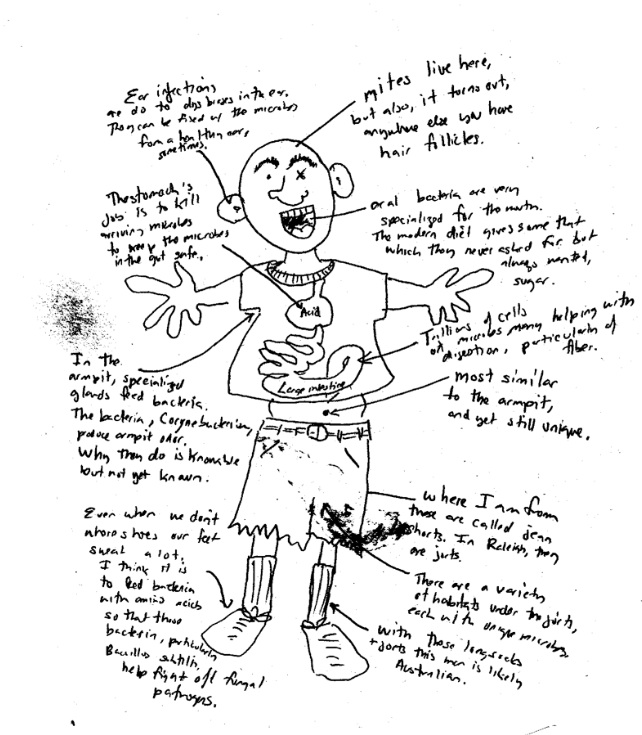 4-Generally speaking, how the composition of species in different places in the world, in a home or in a body differs. The standard approach is a figure like this one from our paper on the biodiversity of homes. This figure, while it does show which sites are more similar to others, is terrible. If one could devise a better way forward with such visualizations, it would be wildly useful (and used). 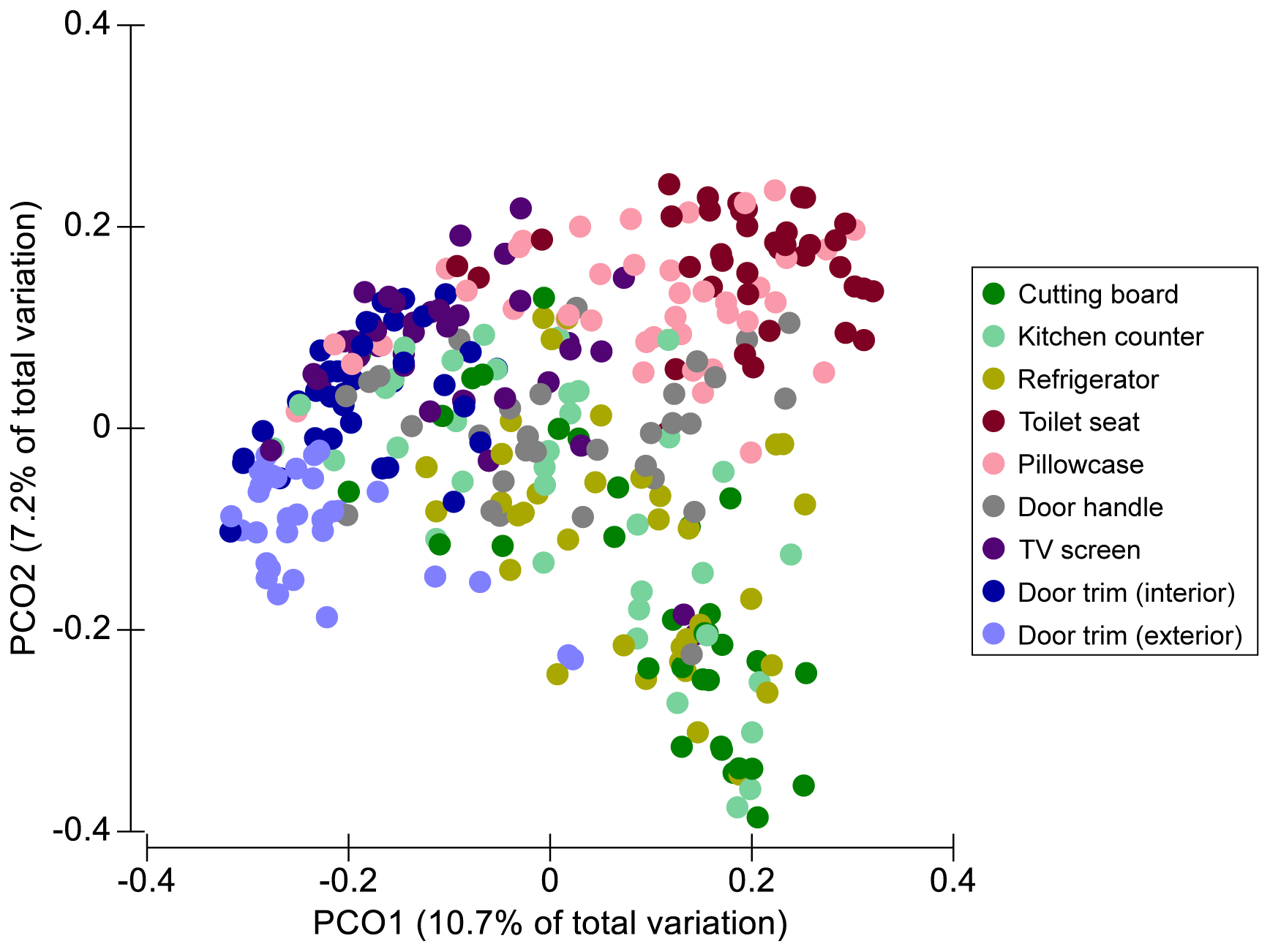 5-How best do we display how the relationship between the societies of animals (ants, bees, etc….) compare to and relate to those of the animal we always focus on, humans. Here, there are many things to compare, different societies, different distributions, exchanges of food, histories, and how these relationships change over time or scales.

6-A comparison of the social networks of a sampling of wild animals (prairie dogs, dolphins, ants, etc…) compared to that inferred for historical human societies and that of modern human societies.

7-A comparison of the engineering of insect nests and those of humans. A rescaling of the Empire State Building and the ant colonies beneath it, for example, so that they might be compared on the same terms.

8-A giant mobile composed of knit or crocheted versions of the organisms that live on the human body (with those organisms accurately scaled). 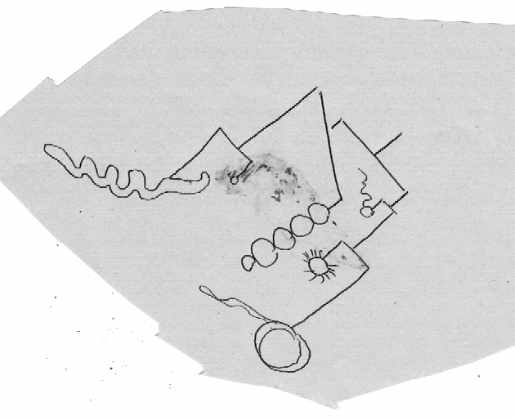 9-Clever ways to do public science wherein an experiment is set up in homes or yards and the results of the experiment become apparent to people over time. Key is that the results need to be real science. Imagine a global warming experiment staged in chambers in the medians on Broadway.

10-Ways to compare the climate in homes to the places on Earth most like those climates.

11-Portraits/portrayals of foodwebs on humans or inside homes, with a measure of the unknown embedded in those portrayals.

12-Ways to allow participants in citizen science projects to compare their own results to those of other participants in ways that might allow them to notice things scientists miss. Here I am thinking of our belly button (see below) or homes projects, but the approach would work for birds, butterflies or anything else. 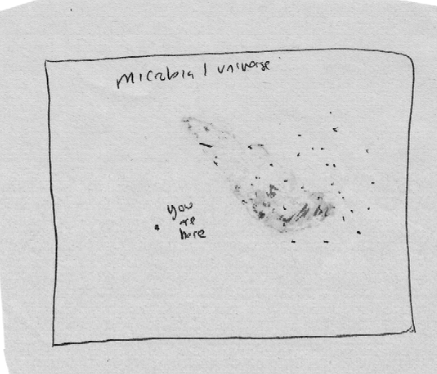 These are not the most creative starting points in the world and yet, I think, the point is not necessarily to start with  the grandest challenges, but instead to start with common challenges around which a group of people can repeatedly gather in the hopes that the real discoveries in terms of art and visualization are those that come, accidentally, favored by chance and opportunity, while working on this more mundane list of tasks.

If you would like to work with us on these endeavors, send me an email and we will save you a space (virtually or in person) at our lab meetings. We will start with the challenges above and hope, very quickly, to move on to bolder things, perhaps even our very own glowing worm.