Before They Were Scientists: Roland Kays

Zoologist Roland Kays and colleagues recently discovered the Olinguito – arguably the cutest new species of mammal – in the cloud forests of the Andes. I asked him to think back to his middle school days and consider what inspired his scientific career in ecology and conservation (He’s the one on the left in the photo above).

What was your most memorable classroom moment?

I remember a sketch I made of a machine to generate power by dropping rocks down a chute. I took it to my science teacher with great pride that I had solved the world’s energy needs and he pointed out that energy would be needed to bring the rocks back up. I also remember doing a science project by building a diorama. I was quite proud of it and was disappointed to get a bad grade because it didn’t involve any actual science – that might have been my first introduction to the scientific method (or lack there of).

Certainly not cool, but probably also not totally un-cool.

Was anyone cool? What made a student cool at your middle school?

I don’t even think I was aware of coolness. There were certainly kids that were more popular than I was, but I was clueless as to what it was that made them cool other than their own self-confidence. Also, I was the smallest kid in school (actually, tied for smallest with my friend David Edwards), so that was a big part of my identity in middle school. I wasn’t cool or uncool, I was just small. Finally, that helped when it came to wrestling and I could face off with kids my own size.

What were your favorite subjects in middle school and why?

Science, PE and Music; PE was just fun. I had a good 6th grade science teacher, Mr. Baker — he was my wrestling coach and also did Boy Scouts, I felt like I could relate to him.

Do you still have mementos from middle school?

I still have my trumpet, a wrestling medal, and harmonica from Boy Scouts; Boy Scout ribbons. 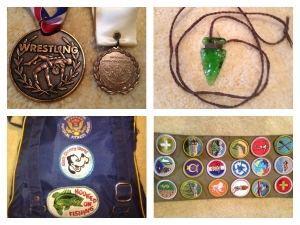 It was just fun: experiments, test tubes, and worm dissections; learning about all the cool stuff.

What did your parents want you to be?

They wanted me to follow my passion. They were very supportive in whatever we were excited and interested in. They went to every single wrestling match and every single play my sister was in; they still go to all of her plays all the way up in Chicago.

I think doing more extracurricular science would have been something I would have enjoyed. I don’t think I had many opportunities for that.

Roland Kays is the Director of the Biodiversity and Earth Observation Lab at the North Carolina Museum of Natural Sciences. When he isn’t discovering new mammals he’s using high tech gadgets to track animal movement or spying on animals in the wild for conservation purposes.