Before They Were Scientists: Amy Savage

Most middle school students go through more transitions in those three years than they will for the next decade. It’s a time for growth spurts, soul searching and coming up with creative answers to the question, “What do you want to be when you grow up?” (Hint: most of us still have no idea how to answer that question.) Amy Savage grew up in Montana where she spent these formative years, wandering in the forest, poking at bugs on the ground, and roller skating.

Lea: As one of the least populous states in the union, few people can actually claim that they’re from Montana – can you describe what it was like to grow up in Montana?

Amy: I grew up in Western Montana, which is really beautiful-something that I didn’t appreciate all that much until I left. One cool thing about both Montana and Idaho is that there are little camp sites scattered pretty frequently across the landscape – a lot of National and State Parks and Forests. So my family would go on Sunday drives and just stop somewhere that we liked and hike around or have picnics. As an adult, I regret that we didn’t camp as much as we could have, given the beautiful surroundings. We (my sisters were my constant companions, so it is hard to think about my childhood as a singular experience) did spend a lot of time in rivers and creeks, mostly swimming in the spring and summer. In the winter, we spent a ton of time sledding and building snow forts, but didn’t really ski or ice skate. In middle school, my big social winter activity was going to the roller skating rink on Saturday nights – Bon Jovi songs still remind me of my days roller skating.

I was more adventurous than my sisters, and developed a preference for wandering through the forest as a kid.

There were, of course, lots of insects and birds around me when I was growing up, and I was really interested in them from a very young age. When my parents tried to get me to play organized sports, I hung out in the outfield and watched insects . . . to the chagrin of my coaches! One memorable experience was from 3rd grade, when I was convinced that I could call birds by whistling from the top of a hill. Every day, I would climb the hill above our bus stop and whistle my heart out until the bus came. It didn’t bother me that no birds ever came, and the only reason that I stopped was that it got cold enough that the birds weren’t around for awhile! My sisters were very embarrassed by their weird younger sister, but I didn’t care.

When my parents tried to get me to play organized sports, I hung out in the outfield and watched insects . . . to the chagrin of my coaches!

I’m sure someone was . . . I guess the kids that were good at athletics were considered cool.

What was your biggest worry at the time?

Oh, like most kids that age, I think I was worried that no one really liked me. Although I was kind of a unique kid in 6th grade, I tried harder and harder to be like everyone else by the time middle school was over. Thankfully, I found myself again as an adult!

Why? What made those subjects so special??

I liked that there was lots of variation in the tasks in English and Science. I loved writing – it was just fun for me – and I was an avid reader.

What did you write about? 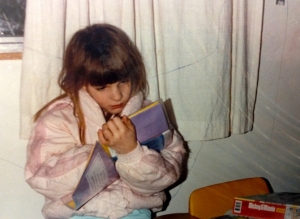 I wrote about whatever I was interested in at the time. Often, the stories were short stories about different periods of the past. I remember a phase when I wrote a bunch of short stories about life in ancient Egypt. I also wrote stories about Amerindian tribes. In fact, when I first learned about the history of tribes in America, I told my mom that I wanted to be a Native American when I grew up (that was in elementary school, though). I wrote one story that I tried to find in my mom’s attic, to no avail. It was a fable set in Africa about women’s rights. I wrote it in 7th grade, and received an award for the best short story in my middle school. When I first got into reading Stephen King novels, I tried my hand at horror stories, but I think they were probably pretty bad! I don’t remember ever writing about science as a kid.

My mom used to tell me I could be anything I wanted to be (except a Native American). She encouraged my curiosity and often told me to embrace my imaginative nature. I don’t think she (or anyone in my family) had any idea about what I would be when I grew up. My dad wanted me to go into computer science, since he thought it was the field of the future and would be economically stable.

I was a math and English tutor after school. I was also really into roller skating in those days.

Roller skating? Were you on a team?

Nope, I was pretty good at roller skating, but it was just a social event for me. I could skate backwards, so I never had problems finding partners for couple skating in middle school-and also was saved from having to hold the sweaty hands of middle school boys!

Did you go to a school dance?

I went to a bunch. We kind of stood around and gossiped. Occasionally, awkward dancing happened.

I wanted to be a paleontologist when I was in 4-6th grade. I thought it would be a chance to go on lots of digs and solve the mystery of the ‘extinction’ of the dinosaurs. I went through a phase in 7th grade when I changed my mind and decided that I wanted to be a novelist. By the time I was in the 8th grade, I didn’t really know what I wanted to do.

Now you are studying ants in the medians of Broadway in New York City, did you ever imagine that life when you were in middle school? What would your past self think of your current life?

I remember dreaming of someday going to California and seeing the Pacific Ocean — that was about as far as I thought I’d get from Montana. I didn’t think much of cities, and would never have thought that I would ever get excited about the life of urban species. I always enjoyed watching ants, but only considered biology as a potential hobby – not a career. In middle school, I imagine that I would have been fascinated by my current self, particularly the idea that someone could make a living doing what I now do. My work in cities would have seemed completely foreign, but I think I was already a naturalist — observing the plants and animals around me and asking questions about them. I think my training as an ecologist has simply given me the tools and confidence to pursue some answers to my questions as an adult.

In middle school, I imagine that I would have been fascinated by my current self, particularly the idea that someone could make a living doing what I now do.

In high school, I was in a math class that taught math concepts using scientific applications. It made me more excited about science. Ever since I can remember, I always loved watching insects and got really interested in conservation in high school. That’s when I led a recycling effort for the school. In middle school though, I was a little too worried about blending in.

I started volunteering when I was in middle school. I tutored other kids in math and English after school. I also spent Saturdays distributing books to patients in the local hospital (my mom was a nurse). I learned that I really liked helping other people and that I am genuinely interested in hearing other peoples’ stories.

Dr. Amy Savage is a Post-Doctoral Scholar in the Rob Dunn Lab at North Carolina State University. She’s an ecologist who’s jazzed about ants and their beneficial relationships with other insects and plants. Her research on ant mutualisms has taken her to Samoa, New Zealand, Australia, Costa Rica, Panama, Washington State (USA), and most recently, to New York City (USA) with the School of Ants project.