Nature in Your Backyard: The Functional Decorator

The other day I went onto my front porch to admire my duplex neighbors’ Christmas lights. They were the first up on our block and the single string of big lights had a hazy 90’s glow about them. The brightness of the light takes the place of our porch light, but still serves the security purpose of night-time visibility with seasonal grace. I do enjoy functional decorations.

When I turned to walk back inside, I saw the single string of another functional decorator in my neighborhood. Parked right between a goal post of two azalea branches was the barely-visible Cyclosa turbinata, a trashline orbweaver. Okay, so the name doesn’t bring up the best visual, but it, while incredibly accurate, doesn’t begin to do justice to her craft and allure. Allow me to explain.

This spider is small; about the size of my pinky nail, and as an orbweaver that just sits in its web all day, it’s very vulnerable to wasp attacks.  Wasps and spiders are bitter enemies. They have epic battles leading to casualties on each side, but the wasps usually come out on top. The war, though, has elicited a weird evolutionary arms race. Some spiders use extra silk as a barrier against wasp attack; ichneumon wasp larvae use chemicals for spider mind control; the Golden wheel spider tucks into a ball and rolls down the sandy hills of Namibia. The stakes are high and they’re willing to do anything to get ahead.

The trashline orbweaver spider takes the “Where’s Waldo?” approach. It builds replicas of itself out of eaten prey and lines them down the center of the web. Then it tucks itself right in the middle of the web, essentially hiding in plain sight. (We could talk about how gross it is to have a decoration of carcasses lining one’s house, but before you get on your high horse, think about taxidermy, seashells, Halloween, and leather.) And here’s the thing: it works. Wasps have been shown to not be able to tell the difference between the spider and the decoys. The web decoration saves its life. A spider that uses camouflage to win battles; very Peeta from Hunger Games. 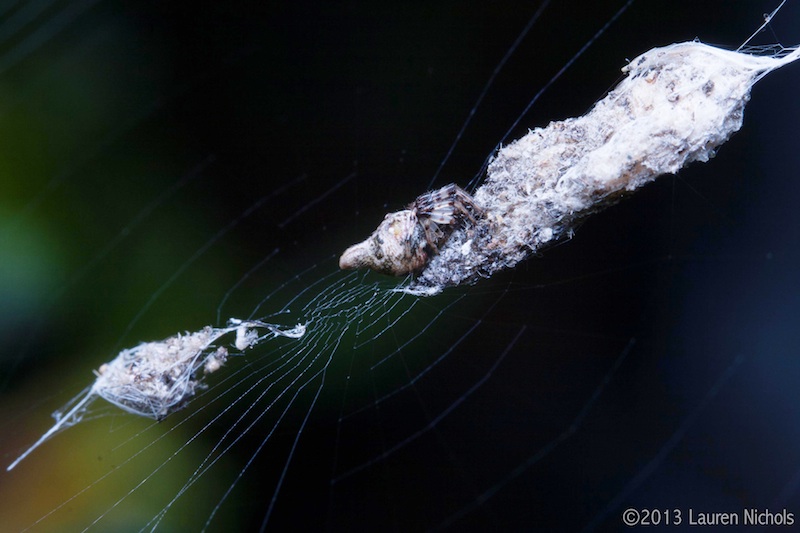 This is why I don’t like the name “trashline” orbweaver. The name implies that the line is something worthless; waste that should be taken out because it’s no longer useful. But in reality, the “trash” is its most valuable possession. It’s the only resource it has to keep the odds slightly in its favor.

I’d like to make a motion for a new name. Something that can give the spider the respect it deserves for being so clever and resourceful. A name that can show how bold it is to hide in the most predictable place without being found. Something that honors its functional decoration. Any ideas?

About the Author: Christine Brown