Before They Were Scientists: Clint Penick

Ant biologist Clint Penick (that’s him above on the far left) didn’t win the “Most Likely to Become a Scientist” award in middle school. In fact, when I asked Clint if he was cool in middle school he answered my yes or no question with one word: skater. He could do an ollie, play some power chords on the guitar and listened to obscure punk bands. He’d tell you which ones, but you’ve probably never heard of them.

Clint was more of the creative type in middle school, and favored “…any class that let you express creativity on assignments.” His favorite classes were writing and history, not science. In fact, he hardly remembers his science classes in middle school; he only remembers that they were boring. He attributes his love of creative subjects to good teachers noting, “

[a] boring subject taught by a great teacher can make a huge difference.”

Clint explained, “In my science classes, we mostly copied down notes from the teacher. I thought science was just about memorizing ‘facts.’ Turns out when you actually get to do science it is so much different. It is really a creative process. You get to ask questions nobody in the world knows the answer to, and then you get to figure out how to answer them. Sometimes that involves giving ants haircuts.” 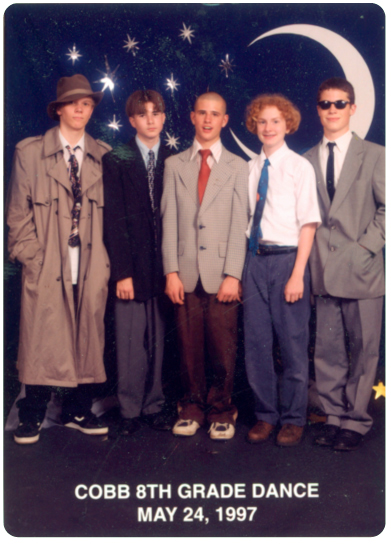 A highlight of Clint’s middle school career was when his band, the Army Ants, headlined the 8th grade dance. Seriously, this ant biologist was in a punk band named the Army Ants – well before ants or a career as a scientist was on Clint’s professional radar. According to Clint, he and his band mates just thought the name sounded punk rock.

His band’s name was the Army Ants.

Clint was also a Boy Scout and eventually became an Eagle Scout. Ultimately, it was the time Clint spent outdoors that inspired him to pursue a career in science. He decided he would become a biologist after returning from a long hiking trip along the Appalachian Trail. “When you spend a lot of time outside, it is hard not to start asking questions about what you see,” Clint reflects.

“When you spend a lot of time outside, it is hard not to start asking questions about what you see,”

If Clint could run into his past middle school self, he would offer this rock star advice; “In any situation where you feel nervous or shy, the other people you’re talking with probably feel exactly the same way.”

Clint Penick is a biologist and Postdoctoral Scholar at North Carolina State University. He’s particularly interested in the development and evolution of ants, although he has recently taken to cooking ants from New York City to see how they respond to changing temperatures. Clint still maintains that punk ethos – when he’s not in the lab, you might find him skateboarding or checking out the punk rock scene in the Triangle.

Be sure to check out other stories of scientists when they were in middle school in our continuing series: Before They Were Scientists.