Nature in Your Backyard: Mystery “Leech”

My office is located in a fun hallway. And by fun, I mean that my colleagues are always dropping by and sharing stories about the biodiversity in their daily lives, or as was the last week, the physical specimens that they collected while going about the business of their daily lives.

First, a fish biologist dropped off a camel cricket collected from his basement for our Camel Cricket Census. Later in the afternoon, a neurobiologist swung by with a praying mantis perched on his notebook. 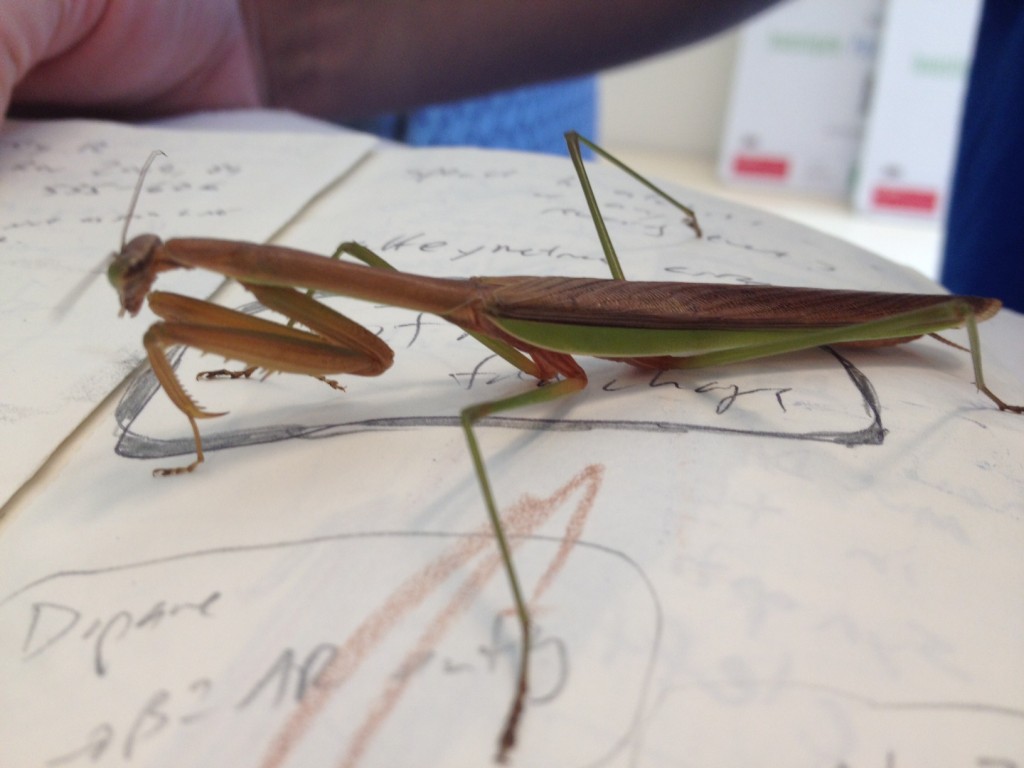 I enjoy these drop-by visits – they are little moments of nature, shared with friends, right in the comforts of my own office.  And I’ll admit, when I’m having a long day, they also give me a much-needed boost. It’s fun to look up from your computer screen and flex your natural history muscles.

Most of the time I become reacquainted with old six-legged friends. But every now and then, I meet a mysterious creature whose identity leaves me scratching my head.

As was the case a few weeks back when another colleague, Jason Flores, came by and told me a curious story about a critter he and his kids encountered on the sidewalk on their morning walk to the bus stop.

It was black and shiny, almost worm-like. He observed it contracting and expanding, occasionally poking its head up in the air. When he visited the bus stop the next morning, the critter was still there, albeit drying out and quickly becoming food for fire ants. He snapped and shared a photo with me.

I pondered this image, trying to recall as much as I could from my days teaching undergrads about animal diversity. I decided, based on the photo and Jason’s description of its behavior that it was most likely a leech. He concurred. 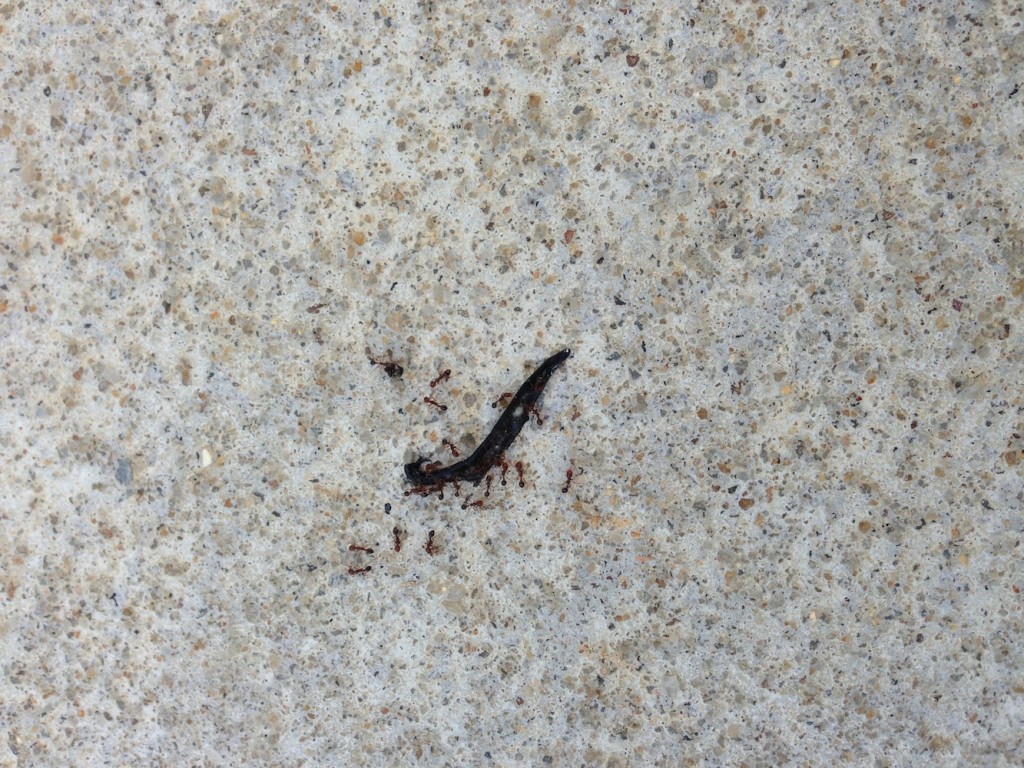 A few days later, Jason shared a better photo of another so-called “leech” that he and his kids encountered – again, there it was just hanging out on a suburb sidewalk. I was puzzled by it – What was a leech doing there, just chilling on the concrete? 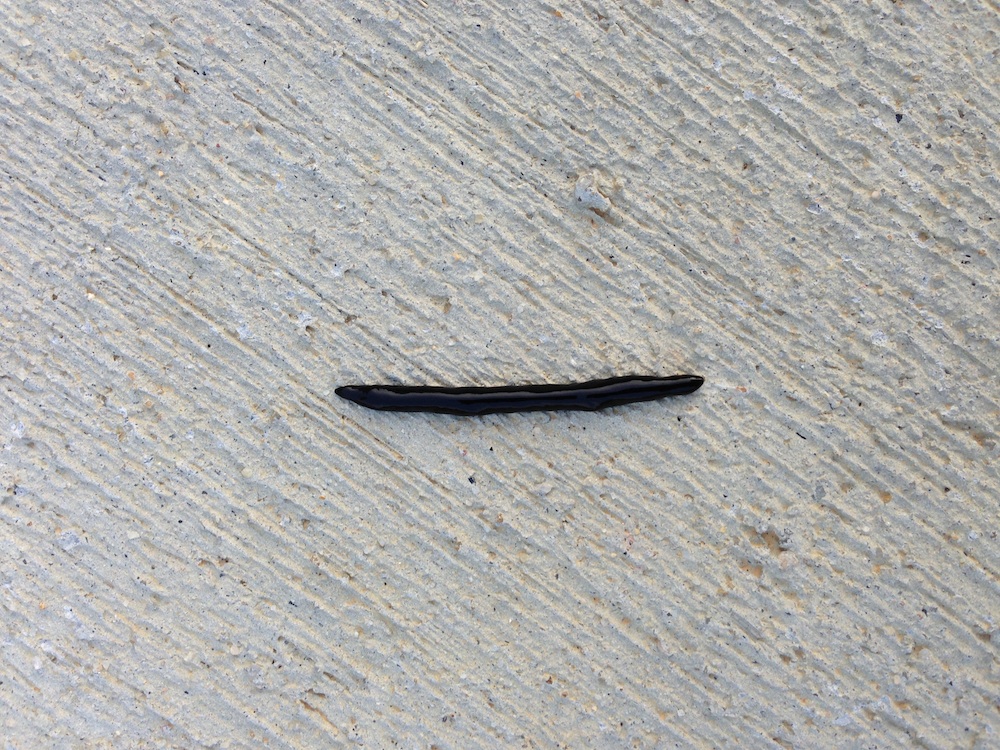 A “leech” on the sidewalk. Photo credit: Tonya Flores

The only leeches I’ve ever seen in the eastern US were in water (in fact, we recently found some while flipping rocks in a local stream a few weeks ago – check out this video, starting at 3:00). I thought terrestrial leeches were largely confined to the tropics  — I’ve heard some gruesome stories and have seen even gruesomer pictures thanks to friends who did fieldwork in the tropical rainforests of Southeast Asia and Australia.

Yet, something about Jason’s mystery “leeches” didn’t quite sit right with me. I couldn’t make sense of their suburban sidewalk location and their smooth shiny bodies.

So like any good nature nut, I decided to investigate further. With a little Internet sleuthing I learned that there are indeed terrestrial leeches in the eastern US. In fact, two terrestrial leech species can be found living under rotten logs in Great Smokey Mountain National Park; they eat earthworms.

Alas, the article that mentioned terrestrial leeches did not contain photos. So I contacted one of the world’s leading leech experts, Dr. Mark Siddall at the American Museum of Natural History to get his opinion. Who was this creature and why did Jason and his kids find it on the sidewalk?

Mark was kind enough to answer my query, very simply and directly.

It is not a leech, it is a flatworm, probably in the family Geoplanidae.

Doh! We missed that identification by a whole PHYLUM of life – Leeches are in the Phylum Annelida, the phylum of segmented worms, including your friendly neighborhood earthworms. Take a look at the pictures of Jason’s flatworm again – no repeating muscular segments there! Its smooth and shiny surface should have been our first clue to its identity.

Flatworms belong to the Phylum Platyhelminthes. Now that you are thinking about them, I bet you remember flatworms from high school biology – they’re touted as the most primitive example of bilateral symmetry (having distinct left and right sides). Flatworms lack a circulatory system and a body cavity – everything moves through their tissues by diffusion. Flatworms include parasites like tapeworms (see Dr. Eleanor’s recent post about her dog Lucy Bea’s butt worm) but also terrestrial predators, like the one Jason and family encountered on their sidewalk.

Similar to leeches, terrestrial flatworms show hunting behaviors – they use sensory organs near the front end of their body to detect food.  Admittedly, it was Jason’s report of seeking behavior that first led me astray down the leech identification path.

The really cool thing about the terrestrial flatworm is that its mouth is on the underside of its body. When it encounters prey, the flatworm extends a muscular tube called a pharynx through its mouth. It then secretes digestive juices that dissolve prey outside of the flatworm’s body.  With slime and that pharynx, terrestrial flatworms can take down earthworms, snails, slugs and insects.

Now must be the time of year when terrestrial flatworms are out and about. On the same day I heard back from the leech expert, I received an email from Carolyn, a Your Wild Life volunteer in Raleigh, describing flatworms she encountered on a morning walk with a friend:

They were very long – every bit the 10” I have read about.  Dusty brown but no stripes that I remember.  They were out at 7am in the shade last Saturday crossing the 8’ wide greenway on a stream of slime. It was in the low 50’s.  My fellow walker who is terrified of snakes took off but I stayed to look.  Strangest head I have seen, like a breathing fan.  I knew it wasn’t a snake because of the slime and it didn’t take off from the vibration of our steps.

With my new and improved knowledge of terrestrial flatworms (and leeches), I’m pretty confident that Carolyn encountered a different species of terrestrial flatworm than Jason and his family. I suspect she spotted a “hammerhead worm” in the genus Bipalium, a group that looks quite alien-like with their broad heads.

As you go about the business of your daily lives, keep your eyes peeled for your own backyard mysteries, worm and otherwise. We’d love to hear about them and feature them on the blog!