Last week, we hosted an outstanding group of students from the NC School of Science and Mathematics for a two-day research experience in the lab, part of the CAALS 3-D (Creating Awareness of Agriculture and Life Sciences Disciplines, Degree Programs and Discoveries) program at NC State.  We were inspired by their enthusiasm and passion for science, and wish them all the very best.

Dear Students of the North Carolina School for Science and Mathematics,

I can’t remember very well what it was like to be in tenth grade (or 11th or 12th), but I do remember that I did not think very much about science.

I thought about my locker combination (which I always forgot), math class, why I chose to take shorthand (does it still exist?), social life, wrestling, football and fishing. I did not think about science because I did not really know about science. Or at least I did not understand that science was something that I, a kid growing up in rural Michigan, could do.

Science is not most of the things that I might have thought it was when I was 16. It is, very plainly, the (somewhat) organized attempt to know more tomorrow about the universe than we did yesterday, a kind of excited struggle against our collective ignorance for something ever closer to truth (see Einstein’s better but longer definition here). Science is equal parts revelation and creation. We reveal truths but also create the tools to see those truths.

Now, I will tell you what no one told me when I was 16, but I wish they had. It is a kind of secret.

Most of what can be discovered has not yet been discovered. Sure, we know the continents. We have been to the mountains and back. But just below the surface of your daily life (the lockers, social life and classes) lurk new phenomena we cannot yet imagine, discoveries you could make. The most exciting of these discoveries are things that, right now, seem inconceivable. 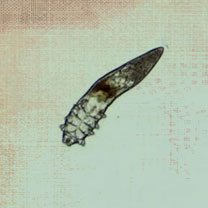 When you visited my lab, you helped to study the mites that live on humans (variously called face mites, forehead mites, body mites, Demodex mites, or “oh man are there really animals living on me?!”). Although it may be hard to believe (it would have been for me), part of what you helped to discover in the lab using standard DNA techniques is something no one else outside of you and our lab knows. You have become part of the secret knowledge of what might be. We will keep you updated as things progress, but you are now part of the unfolding story, the unwinding thread of discovery.

Meanwhile, the mites are not so special. All around you are species, molecules, behaviors, and other realities no one understands. Who will understand them? Why not you? You could wait, of course, until the urgencies of high school pass, but there will always be urgencies, just new ones at each stage. In the meantime the life you see outside your classroom windows is as nearly full of mysteries as it was at the end of the dark ages.  You might not believe this now, but if you go on in science you will believe it one day.

As for your teachers, let them help you. Math, chemistry, physics and biology are necessary tools, but so are literature, history and art. With perseverance and the right training anyone can clone a gene or set up a field plot, but far fewer have the context (the literature, history, and art) to make sense of what is seen through such endeavors. Einstein said that the “greatest scientists are artists as well,” and this artfulness includes both writing and storytelling. Scientists must explain their discoveries in order for them to have meaning. Most biologists, for example, write far more often than they use microscopes, pipettes or field boots. Also, I should note that part of what your teachers tell you in your science classes will be wrong. Humans are making new discoveries so rapidly that many of the “facts” you learn will be out of date in a few years, but the process of science and the context of other fields, they hold fast. Learn the facts–they are necessary as reference points–but it is more important to learn the processes.

In closing, we will let you know what we find next with the mites. You are always welcome to continue working with us in our lab. I think we are on to something exciting, but so are tens of thousands of other scientists around the world, all of them leaning into the darkness of our ignorance, puncturing it with whatever is at hand and looking through. I promise that the joy of this endeavor is real and fulfilling. It awaits you, as it will your children, grandchildren, and everyone else for the rest of time. Most of what is knowable remains unknown.