Taking a Closer Look at the Dog Data

A few weeks ago we announced the publication of our first research paper from the Wild Life of Our Homes project, based on microbial data collected by 40 citizen households in North Carolina.

One of the most interesting findings in this paper was that the presence or absence of a dog in a home explained nearly half of the variation in the bacterial composition on the pillows and TV screens in the houses we studied.

As Rob explained in a recent blog post, the pillows in dog homes tended to have bacteria associated with dog mouths (such as spirochetes and species of Pasteurellaceae), their skin and fur and soil. On TVs, the bacteria tended to be those associated with soil, dog skin and some other unknown source (Rest assured, however, these were not fecal bacteria.)

We wanted to share an updated version of a figure from the paper (Fig S2) where we plotted the microbial communities we detected on TV screens. Each dot represents the community of microbes in a sample collected from a TV screen in a single home. Filled purple circles represent homes with dogs and open circles represent homes with no pets. The update is that this time the figure includes home ID numbers labeling the dots for the reference of participants (and only they know who they are). 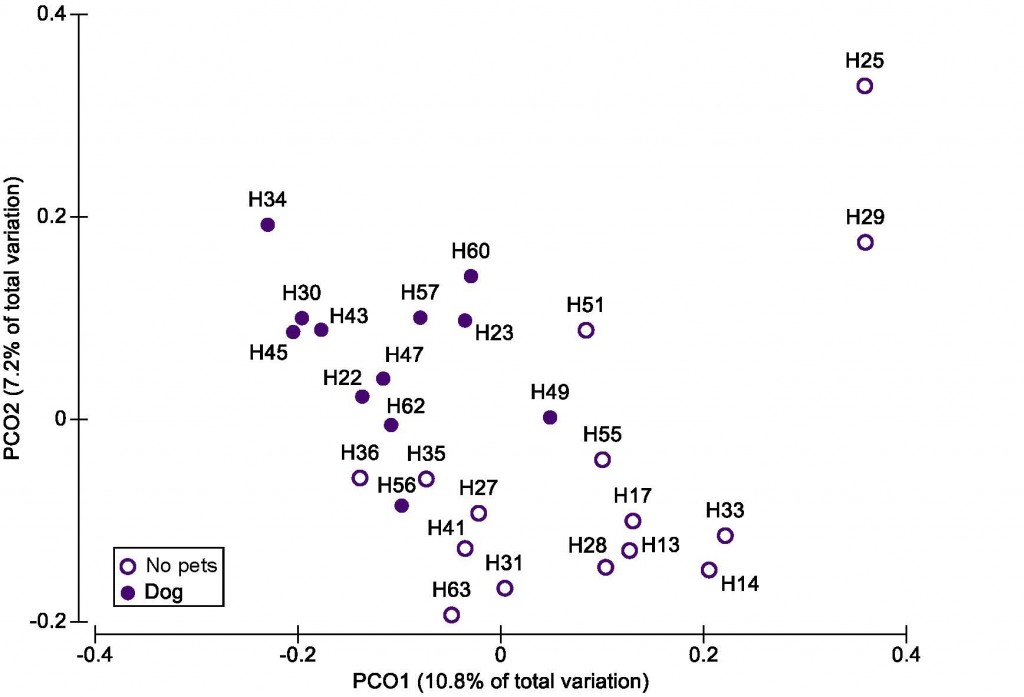 Examine how the dots are arranged in space – Dots that are clustered closer together have more similar microbial communities than those that are farther apart. In general, the upper left quadrant represents the “doggiest” homes whereas the lower right represents the least doggy homes.

And yet, not all the homes cluster in these two opposing corners:

These are the kinds of questions we’re pondering right now, and we wanted to give you an opportunity to chime in with your thoughts. Please share in the comment section below.

Note there’s only 27 dots, not 40, on this plot – For this comparison, we only compared homes that had dogs (and no other furry pets) to homes with no pets. Several participants had cats or both cats and dogs, but not enough for us to do any statistical tests. We’re looking forward to analyzing our larger data set of 1400 homes to examine the effects of cats or the cat/dog combo on microbial communities.

If you were a participant in this first study, but don’t see your home ID labeled on the plot and you were either a dog or no pet home, it means there must have been an issue when we tried to sequence and analyze the microbes from your particular TV screen sample. Bummer. Or perhaps you didn’t have a TV screen to swab.

Over the coming weeks, we’re continuing to work on ways to share individual home results in clear and visual ways – for both this first study and ultimately with all 1400 Wild Life of Our Homes participants. We’d love to hear from you about your preferred method for seeing and receiving that information – who knows, maybe just a list of species floats your boat? But somehow, we doubt that.