What do planthoppers and armpits have in common?

Did you know that today (May 22) is the International Day for Biological Diversity? To celebrate this holiday, we’re sharing a recent conversation we had with Dr. Julie Urban, our friend, collaborator and assistant director of the Genomics & Microbiology Lab at the Nature Research Center at the NC Museum of Natural Sciences. Julie studies the diversity of not one, but two of our favorite types of organisms: insects and bacteria! 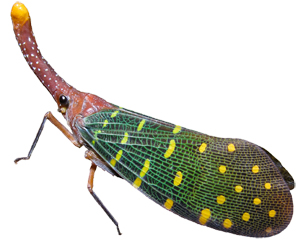 One of the strange and beautiful planthoppers Julie studies. (Photo credit: www.planthopper.com)

I sat down with Julie right before she jetted off on a research trip to French Guiana. We chatted about her love for bacteria in strange places (ahem, armpits and belly buttons) and discussed the fascinating world of planthoppers, which – besides being incredibly photogenic – have a secret internal life that I had no idea about!

Julie studies the family tree of planthoppers (Fulgoroidea), a diverse group of insects (over 14,000 described species!) that have a special relationship with bacteria. To feed, planthoppers insert their special straw-like mouthparts into the phloem tissue of plants to suck out the sugary sap. Unfortunately, these juices are rather nutrient-poor, lacking essential amino acids that the planthoppers need but are unable to make themselves. Instead, they must rely on the aforementioned special bacteria!

Check out the interview to learn more about Dr. Julie Urban’s research on bacteria in strange places: