When the region of Cappadocia found itself divided between hostile nations, rather than flee, the people decided to dig in. The landscape was composed of soft volcanic rock carved by erosion over millions of years into odd towers and pockmarked cliffs. Taking a cue from the landscape itself, the people of Cappadocia dug fortresses into the rock to escape persecution from the early Romans, and later, hostile Arabs. In some places, these fortresses grew into underground cities that could house thousands of people. Some reached ten levels deep, and they featured kitchens, sleeping quarters, chapels, storage chambers, and vast defense networks. They had doorways that could be sealed using heavy millstones, and they had walls with strategic holes to hurl spears or pour hot oil on their enemies below.

Located in what is now modern Turkey, these underground dwellings have remained largely intact, and visitors have been quick to point out what they remind them of: the nests of ants. Humans have looked to ants as parallels of our own societies since the time our ancestors first began to settle into cities. The ancient Greeks mused on the behavior of the ant and the grasshopper, and the Old Testament even gave ants a cameo (Go to the Ant, thou sluggard…Proverbs 6:6). In Cappadocia, we don’t know exactly how the inhabitants viewed themselves, but it’s hard not to wonder what they thought about ants.

My friends at yourwidlife.org and I are still interested in parallels between ant societies and our own – whether related to disease dynamics, social behavior, or the built environment. We have begun to think of ant societies as models of our societies in the way that rats are models of our bodies. Here we list the top 10 ways an ant’s house is similar to your house, though feel free to add to our list. There are far more than ten ways.

1.) Ant nests have rooms and hallways.

Ant nest architecture is likely as variable as the number of ant species on the planet (close to 15,000 at last count), but they share some common features across species. For one, most ant nests are modular and consist of chambers connected by shafts, which are similar to our rooms and hallways. These chambers may serve as nurseries for developing larvae, storage rooms for seeds and other food, or royal chambers for protecting the colony’s queen. 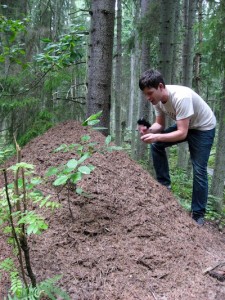 2.) They are temperature controlled.

Central air and heating allow us to keep our homes at a moderate temperature year round, and ants have this ability too. Some, like fire ants, build mounds to capture heat from the sun, and workers move larvae inside to track their preferred temperature. Others, like thatch ants, live near the Arctic Circle and build heaping piles of compost that release heat to keep the colony warm over winter. In the tropics, where too much heat is the problem, army ants build nests out of their own bodies and change their position to help cool the nest during the hottest part of the day.

Colonies of leaf-cutter ants are massive. Their nests can be the same size as a New York studio apartment, and they house tens of thousands of workers. Inside, the ants grow fungus to feed their larvae, and the combined mass of the ants and their fungus gardens produces a huge amount of CO2. Like us, ants need oxygen to breath, so they build chimneys to circulate fresh air. As wind travels across the surface, air blows in through the chimneys on the side of the nest, and stagnant air escapes from the chimneys on top.

If you watch an ant colony long enough their OCD tendencies become obvious. These tendencies are magnified when it comes to cleaning – ants will carry their own sisters to the trash pile, kicking and screaming, if they smell a little off. Leaf cutter ants maintain huge garbage chambers, and when workers shift to garbage duty, they’re never allowed back inside the main nest. They are the “untouchables,” individuals abandoned by society in order to prevent disease.

Ants are skilled gardeners. Some grow crops of fungus, but others show off another gardening skill: weeding. Harvester ants clear crop-circles around their nests, which are visible from Google Earth. Others, like the lemon ants of Amazonia, weed some plant species while preserving others to create what locals call Devil’s Gardens. Ants may even collect certain seeds deliberately and plant them around their nests to create their own landscaping.

When you get home, do you ever notice that your house has a specific smell? Something familiar? Ants communicate through scent, and they recognize their family members by smell. Each nest has a distinctive odor that might be related to what a colony’s been eating, their genetics, what type of soil they nest in, or factors still unknown. There is also evidence that humans communicate through pheromones, though this is one of the many cases in which we know more about “them” than we do about us.

It can be hard to find a household cleaner nowadays that doesn’t advertise some type of antibacterial property. When ants evolved life underground, they needed a way to prevent mold and fungal disease from spreading inside their colonies. Their number one defense: the metapleural gland. This gland is located on their thorax and releases an all-natural, antimicrobial cleaner that kills harmful microbes on contact. No triclosan necessary.

All ant nests have an entrance patrolled by guards. Some species take this a step further, like the turtle ants. Turtle ants have soldiers with disc-shaped heads that fit perfectly into their nest entrances. These soldiers serve as living doors, and they control who enters and who stays out.

9.) Even with doors, they still get unwanted guests.

Just like our houses, doors aren’t enough to keep out every species that might be trying to sneak inside. Certain species, called myrmecophiles, or “ant lovers,” have co-evolved with ants to become specialized house-guests. While our homes may be invaded by cockroaches, ant’s face springtails. Like our cockroaches, springtails scurry on the floor and eat small scraps. Ant colonies can be infested with scores of other arthropods too, like beetles, crickets, spiders, caterpillars, flies, and silverfish.

It may comfort you to know that even ants have to deal with ant problems. Ant workers may differ in size by 100-fold, and there are tiny species, like thief ants, that specialize in robbing food from larger species. For comparison, a thief ant invading a larger ant’s nest would be similar to a mouse invading your cupboard. After years of evolution, it’s possible that ants have a better way to deal with these unwanted guests than us, but we’ll have to keep studying them to find out. 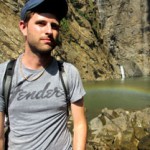