Today we have a guest post from Mary Jane Epps, post-doc and chief beetle wrangler at Your Wild Life.  Recently, Mary Jane has begun investigating the associations between beetles and humans, particularly within human dwellings, including the remains of homes in ancient Egypt.

Back in March I accompanied our urban ecology team on a trip to New York City to study the effects of Superstorm Sandy on urban arthropods. Admittedly as a natural historian who feels more at home in the hills of Appalachia than in the urban jungle, I did not anticipate that New York City would be a bastion of wild nature. However, one of the wonderful things about nature is that it can be found everywhere, and after my trip I had to consider that the nature found in New York City is not only wild, but may be among the most ecologically consequential. 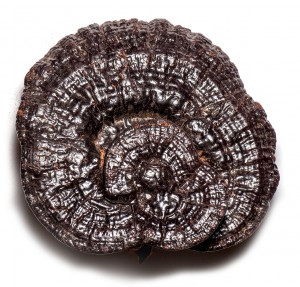 I scooted town a few days before the rest of the crew, and lucky for me Elsa Youngsteadt and Lea Shell stopped by Chinatown and picked up a thank-you fungus for me. Not just any fungus, mind you (and certainly not an unpleasant or itchy one), but a Ganoderma lucidum, or reishi, a beautiful red ‘varnish conk’ famed—thanks to its alleged medicinal properties—for over thousands of years of Chinese history.

I was thrilled to receive such a fabulous mycological souvenir and left it on my desk as a trophy of sorts. You see, I love fungi—not only are they in everything (us, plants, arthropods, soil, even floral nectar), but they are often the hidden drivers behind major ecological processes like nutrient cycling and plant community assembly. I like to think of fungi as the behind-the-scenes workers in an ecological play; we tend not to see them onstage, but without them the play wouldn’t happen (or at least it would be a lot less interesting!).

In my New York reishi fungus, I found that a different group of organisms was at work behind the scenes. When I returned to my office the next day I was surprised to find a powdering of dust-like debris underneath the fungus. A day later there was more. Puzzled by this, I looked closely and beheld two tiny brown beetles on their backs in the dust, clearly having fallen from the fungus! Over the next few days, more than a dozen beetles emerged from the fungus, most of them still alive and active. I found myself imagining tiny cows frolicking in a fungal pasture.

Observing these insects more closely, I recognized the beetles as members of the family Ciidae, sometimes known as the ‘minute tree-fungus beetles’. The ciids are a globally diverse group of beetles that feed exclusively on fungi, and especially on polypores (fungi that produce their spores from pores rather than gills) such as my Ganoderma specimen from Chinatown. When I looked at these ciids under the microscope, I was surprised to find that not just a single species was living in my fungus, but at least three genera: Cis, Octotemnus, and Orthocis. 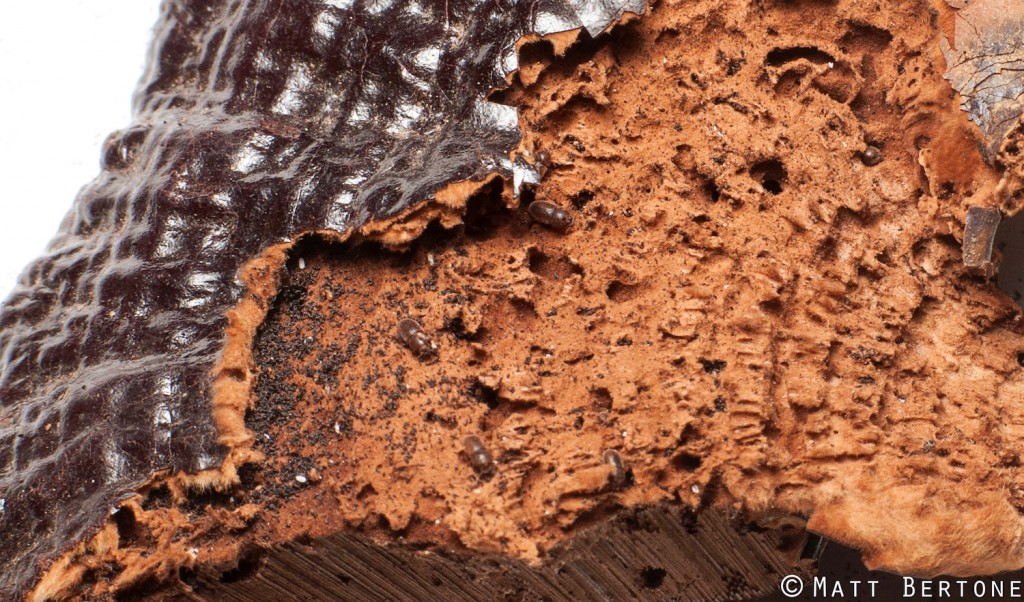 It was quite surprising to find my reishi fungus full of fungus beetles! (Photo credit: Matt Bertone)

As delighted as I was at the chance of seeing some new fungus beetles, finding these beetles made me wonder. Where did these beetles come from? Are ciid beetles spreading as a result of international trade in dried mushrooms?

After a little sleuthing I learned that indeed several ciid species are considered invasive, and one of these, the ‘reishi beetle’ Cis chinensis, is making its way rapidly across the globe from China—the largest commercial exporter of dried mushrooms and other fungi. Thanks to trade in dried fungi (and specifically, trade in the reishi beetle’s favored host, our very same Ganoderma lucidum), this beetle has expanded from its native China, where it is a noted economic pest of G. lucidum.

Although there is currently no indication that the reishi beetle has established wild populations in the US, many species of its preferred host fungus Ganoderma—including a native American variety of G. lucidum—are present in our forests, and potentially could be colonized by beetles invading on imported fungi. Indeed, the reishi beetle has now become established on wild Ganoderma in Europe and South America, and has been observed living on Asian G. lucidum imports in Los Angeles in the United States. 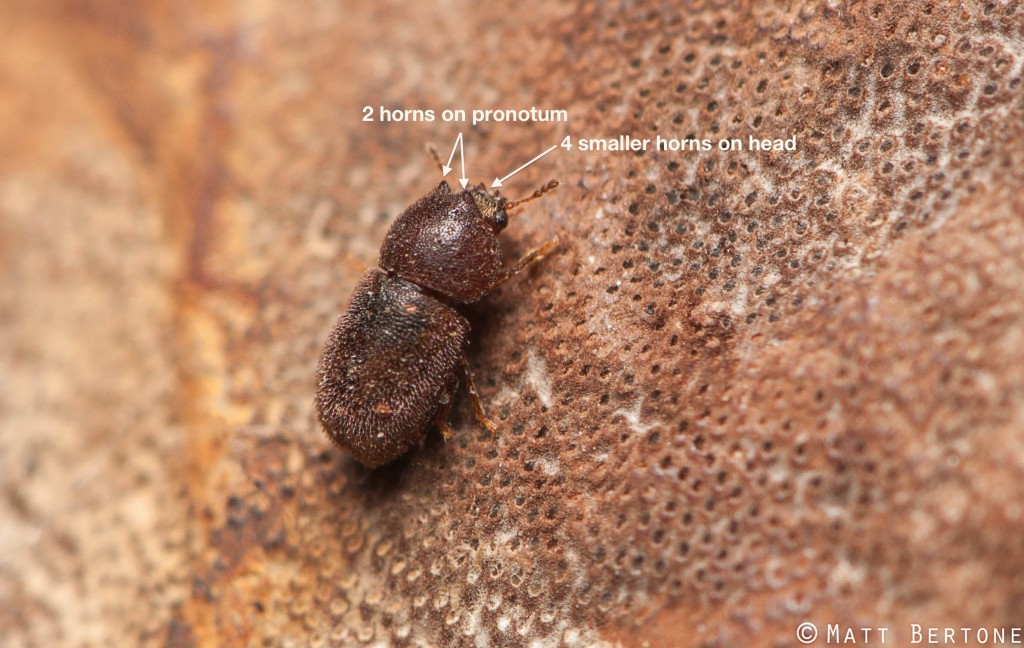 Regardless of whether any of my Chinatown beetles are indeed the fast-spreading reishi beetle, there is a high likelihood that they “hitchhiked” with my Ganoderma specimen overseas to the markets of New York City. Legally, mushrooms that show much sign of insect infestation are restricted from import by the US government. However, in practice even the most stringent regulations only slow the introduction of foreign species by commercial trade. Every ship, especially those carrying potentially edible things (fruits, vegetables, mushrooms, or even wood), is an unintentional ark of life, and every market the point at which the denizens of such arks disembark.

Here, we come to recognize one of the major ecological impacts of cities on our wilder ecosystems. As the centers of international trade, large urban areas are the primary destination of such imports. In this way, cities have become the major gateways for the entrance of new species into our native ecosystems. To the extent that such introductions can shape ecological systems on a broad geographic scale, cities may have the widest impact on our wildernesses. Although most of the species that arrive in cities do not become established or have little impact (innocuous beetles falling out of mushrooms onto the thankless cement), a small percentage may become serious invasive species—even to the point of environmental or economic disaster. Perhaps the best example of this is the chestnut blight fungus, first reported within the United States in New York City in the early 1900s. This fungus did not stay within the confines of the city for long. Instead, it spread into the most remote corners of our eastern forests, extirpating the American chestnut (the dominant tree species in many parts of eastern North America) from the forest canopy in less than thirty years.

I must admit that I still enjoy watching my collection of tiny ciid beetles (now safely contained in a vial) as they continue to feed and thrive on bits of their exotic big-city fungus. However, at the same time these beetles are a sad reminder of the ease and frequency by which our urban trade routes transport foreign (and sometimes invasive) species far from their native ranges. We often think of cities as being wholly removed from the wilder areas of our country; however, where introduced species are concerned, these jungles of cement and industry are among the wildest places, the humble ground from which many new and often tragic stories begin. 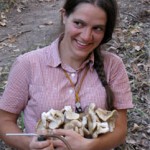 Mary Jane Epps is an ecologist and entomologist interested in community ecology and species interactions. She’s excited to be working on the ecology of beetle communities in our homes, as well as the role of beetles as vectors of microbial diversity in indoor environments. When not looking for beetles, she also enjoys playing fiddle and banjo, mushroom hunting, and exploring all things related to natural history!