The Unresolved Mysteries of the Mold in Your House

Today we have another in our series of guest posts by participants in the upcoming meeting on indoor evolution at the National Evolutionary Synthesis Center in June. Rachel Adams is a post-doctoral researcher at the University of California at Berkeley who studies the dispersal of fungal spores into homes.

In the early 1940s, the promise of the drug penicillin far exceeded its production. Scientists were on a quest to find a strain of the penicillin producing fungus, Penicillium, that would produce more of the “mold juice.” In the most rotten citizen science project ever to be staged, researchers at the then-named Northern Regional Research Laboratory in Peoria, Illinois, requested moldy fruits and vegetables be mailed from around the world. Military personnel were asked to collect soil samples from far-flung locations. The scientists even tasked a lab employee named Mary Hunt with collecting spoiled foodstuffs around town, a task that earned her the nickname “Moldy Mary.” Eventually, a golden-hued mold now identified as Penicillium rubens growing on a cantaloupe in Peoria emerged as the magic strain for producing larger quantities of penicillin.

Few of us can claim to have discovered a mold in our homes that saved millions of lives, but we’ve all had molds in our homes – and, in most cases, the evolution of those mold species remains mysterious. These mysteries call on scientists and citizens to scour the world for answers about environments as ordinary as countertops and basements.

Some molds, such as Penicillium, are extremely common in soil and can become airborne easily, so in most cases they probably just enter our homes through open windows and doors, though it is also possible that the golden fungus, for example, came in on the skin of the cantaloupe itself. But the story of how many other molds in our homes have come to live alongside us is less clear. Understanding the changes that can occur during the shift from natural habitats to human-made ones can give us important clues into the character – and perhaps even consequences – of our unintended housemates. This broader topic is the focus of an upcoming working group on Evolution In the Built Environment, and has inspired me to reflect upon what we do and do not know about the sneaky, scrabbling species we live alongside.

“Mold” is a generic term for furry fungi that grow on moist surfaces. For critters that often make their living breaking down plant and other biological material, many parts of our houses are ripe for growth. An undefended cantaloupe is just as inviting a treat when on a vine in nature as it is on our countertop. Plus, many of the materials we use to build our homes, materials like wood and drywall that do not seem very appetizing, become edible to fungi when wet. But then there are more unusual places in our homes, places that seem hostile to life and devoid of food, where mold can also be found.

For instance, Exophiala dermatitidis is a black yeast that all over the world can be found growing in dishwashers, saunas, and steam baths. Amidst the high temperatures, large amounts of water, and soapy washes, Exophiala clings to the walls, and to life. You just have to wonder – what was this yeast doing, and where was it doing it, that made this part of the built environment an alternate habitat?

In other words, what is the natural counterpart of a dishwasher?

Researchers from the Netherlands and Thailand teamed up to investigate this question. To find E. dermatitidis they did what fungal biologists seem to do when confronted with the question of where a household fungus has come from: they gathered samples, thousands of them. From temperate and tropical climates, from natural areas, like rain forests, and from human-made settings, like bathrooms and railroad ties. Across all these samples, E. dermatitidis was fairly common in steam baths and around railway stations, but was only very rarely found in nature. It was never found in cool habitats, never for example in outdoor habitats in the Netherlands. Where it was found was in animal feces, plants, fruit, and soil, and only in tropical areas. Based on this pattern of occurrence, the authors proposed that the original life cycle of this fungus is tied to that of fruit-eating animals in tropical rain forests.

Perhaps the abilities to adhere to fruit skins, withstand high tropical temperatures and pass through the digestive tracts of animals are pre-adaptations to growing on the walls of steam baths and dishwashers. (For the record, this also means that E. dermatitidis is the answer to that classic barroom question, “What do your dishwasher and fruit bat’s colon have in common?”)

Our homes and common spaces are not the only built environments that offer unique habitats for non-human life. Industrial spaces can provide a completely different set of conditions for growth. As a southerner who enjoys her bourbon, I recognize that too much of good thing can be toxic. But there is a fungus, commonly called the Whiskey Fungus, which seems to never get enough. Before sold, spirits are stored in barrels for at least a few years to complete the aging process. Evaporation of some ethanol occurs over this time. The ethanol that is lost is called the “the angels’ share,” in thanks to the celestial bodies that take a portion while guarding over the aging process. In 1872, a pharmacist named Baudoin noted a black growth on the faces of buildings used to store aging brandy in Cognac, France, and since then the presence of a black fungus on structures near places of spirit maturation has almost been taken for granted. 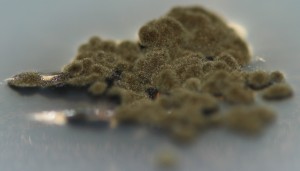 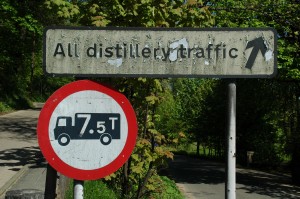 Baudoinia compniacensis growing on a petri dish (left), and on a traffic sign in Scotland (right).

It wasn’t until 2007 that researchers – working near Canadian whisky warehouses – demonstrated that the black fungus deserved a new name, Baudoinia compniacensis: Baudoinia after the French pharmacist who first wrote about it, and compniacensis meaning “of Cognac.” (Up to that point, the fungus was called Torula compniacensis). More noteworthy, the scientists showed that the fungus actually used the angel’s share – the higher concentrations of ethanol in the air – as a food source.

So far, in studies of the Whiskey Fungus the samples that are studied are exclusively those from industrial settings, buildings where spirits are aged and also bakeries. The reason for this is simple: no one has been able to find this fungus anywhere else. That means there is a fungus that is growing so abundantly near aging warehouses it has inspired lawsuits, and yet we don’t know where it grows in nature or how to find it. Ethanol stimulating fungal growth is not common in nature, but places where fermentation does occur naturally, such as piles of fruit around trees, would probably be a good place to start looking for the Whiskey Fungus. It’s close relatives are known to inhabit the “edge of life,” growing on surfaces like marble and on mountainous rocks, including those in the Antarctic desert. So it’s likely that Baudoinia, which probably evolved at least 60 million years ago, is in a place that might, in terms of its climate and food sources, otherwise seem a harsh place to live. Where is Moldy Mary when you need her?

Comparing fungi in their native habitat and when occupying your house is at the heart of understanding the when, why, and how of evolution in the built environment.  This kind of information could give us clues into how to keep some of them out, and even invite others in. Of course these kinds of comparison studies are impossible when you cannot even find the fungus outdoors, but modern methods will improve our ability to relate indoor and outdoor fungi. The species I’ve mentioned are the better studied ones. There are hundreds of fungi in homes and other buildings, and mostly they are there in your kitchen, bathroom and everywhere else, unnoted and unknown.

One thing is for sure – built environments certainly offer terrain for evolution, in places both mundane and peculiar. They evolve whether we understand that evolution or not, and as they do, they result in forms that can save us (Penicillium), blacken our dishwashers (Exophiala) and whiskey barrels (Baudoinia), and send us out into nature to figure out where in the world all of these species we rub up against every day have come from. 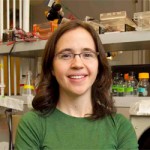 Rachel Adams is a post-doctoral fellow in the Department of Plant & Microbial Biology at the University of California at Berkeley. She studies the dispersal of fungi in homes and tweets at @Rachel_I_Adams.