How teaching high school prepared me for NYC 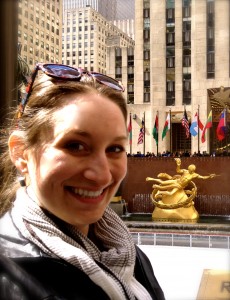 In a former life I was a math teacher at a public high school in rural Mississippi. One day I put up a math problem about how to calculate the probability that you’d have to wait for a certain amount of time at a crosswalk. Now, there was always push-back on any new concept I introduced (math classes aren’t exactly winning the popular vote for “favorite class” in high school), but this particular problem had an interesting response:

“Ma’am,” the student said as he raised his hand, “we ain’t goin’ to New York City, we never gonna use this stuff!” His exasperation was met with cheers from his classmates. All of them looking at me thinking, challenging, “What’s your next move? Tell us when we’re going to New York City and we’ll need this stuff.”

Trying not to be defeated I reminded them that while their town was not NYC, it did, in fact, have crosswalks. And that if they were in NYC, a place they could conceivably visit one day as they are all going to be adults in the near future with access to transportation, they probably wouldn’t be standing there calculating the answer, they would just wait, or dodge traffic, or both. Breathe. The eye rolls have subsided at this point. But let’s try the problem anyways, shall we? Let’s figure out how long it takes to get to the other side.

Fast forward a few years when that adventure in the classroom led me to Raleigh, North Carolina… which then, unpredictably, led me to the streets of New York City; dodging taxis and forgetting all of the math formulas. Because, when Rob Dunn asks if you’re interested in going to New York to take pictures of urban ecology in action, you enthusiastically shout, “Yes!” Partly because, so many lifetimes ago, I told my students that they would be adults and they’d go to NYC, because they can. And now I can.

Never mind that it was a cold and snowy March in the Northeast – this was my first chance to go to the Big Apple! I packed my bags with more camera equipment than I knew what to do with and was well on my way with fellow researcher, Elsa Youngsteadt. While in NYC I was able to reflect on the varied paths that brought me to this place, to assist in the “field” that was the medians and parks of this great city, to navigate the unforeseen challenges in a strange place, and to cross the street unscathed.

Truth is, we observe our world more than we realize. We spend countless hours absorbing the patterns of other people’s lives, making notes of their decisions and activities. We compare those notes to our own; like the field notes of each median and park meticulously taken by our team recording how things were before and then after Superstorm Sandy. Whether or not my students realized it at the time, they continue to inspire me with their challenging eyes, Tell us more about that, ma’am, why should we care?