The secret (and ancient) lives of houseplants

Today we have a guest post by Laura Jane Martin, a participant in the upcoming meeting on indoor evolution at the National Evolutionary Synthesis Center in June. Laura is a writer and PhD candidate at Cornell University, where she researches the ecology and conservation of wetland plants. Follow her new blog: https://sedges.wordpress.com/

My local coffee shop is populated with potted plants. The four closest to my favorite table are Zanzibar gem, bamboo palm, jade, and pothos – species from eastern Africa, Madagascar, South Africa, and China.

People have grown plants in pots for centuries, but it’s only recently that houseplants proliferated. The story of how plants moved indoors is a complex one that involves botanical imperialism, the horticultural explosion of the Victorian era, lighting and heating technologies of the 1900s, and changing fashions. 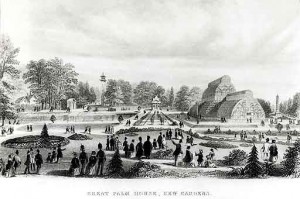 The plants in the back of my local coffee shop embody this imperial legacy. (Coffee, too, is a thoroughly colonial plant.) The four species closest to my table evolved in four far-flung places, representing 30,000 miles of travel to their new coffee shop environment. 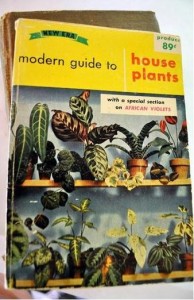 In the twentieth century houseplants became common indoor accessories. An emerging horticultural industry marketed houseplants to middle class consumers, while new technologies in home heating and lighting made indoor propagation more successful. Today the houseplant industry is a multi-billion dollar industry, and changes in technology continue to change houseplants (like this app, which constantly monitors soil moisture and sends instant alerts to owners when a plant needs water).

As houseplants became popular, so, too, did artificial plants, which provided some plantiness without the sunlight and water. Artificial plants have been so successful that, in 2007, botanists proposed the establishment of a new plant family, the “Simulacraceae,” writing: “The Simulacraceae has long been ignored by traditional botanists despite the fact that this family of artificial plants represents one of the most economically important and geographically diverse groups.”

Although the Simulacraceae is meant as an inside joke, there’s something to the idea. Like artificial plants, houseplants have been relatively ignored by scientists, particularly ecologists and evolutionary biologists, who tend to study environments out-of-doors and away from homes.

But this might be changing. This summer, a group of evolutionary biologists, microbiologists, anthropologists, architects, epidemiologists, entomologists, and artists will meet at the National Evolutionary Synthesis Center, with support from the Sloan Foundation, to discuss evolution in the “indoor biome.” The idea is that we know the least about the species closest to us.

What mysteries do houseplants hold? What can houseplants tell us about the environments we live in?

The research on houseplants that does exist tends to focus on their effects on human health. Some limited research suggests that plants improve health in office environments, and that green space reduces psychological stress in urban environments.

But what’s going on with the plants? How could evolutionary biologists use houseplants to better understand evolutionary processes?

Only a small subset plant species make it past economic and evolutionary filters into homes. Once inside, they nevertheless express their evolutionary histories. For example, African violets need good drainage and are difficult to keep upright in pots because they originate from the mountains of northern Tanzania, where they grow in dense forest in environments constantly damp from water draining down horizontal rock faces to which they cling.

Because the sunniest place in a house often provides less light than the shadiest place outside, shade-adapted plants do well indoors. Many of these species naturally occur in dense forests, like bromeliads (Bromeliaceae spp.) and dracaenas (often Dracaena sanderiana). But homes are dry as well, which explains why succulents from the Cactaceae and Crassulaceae families fare well on windowsills, and why moisture-loving plants, like ferns and orchids, can be hard to keep alive.

The biotic residents of my coffee shop environment prompt many questions. What are the species distributions of houseplants? How has the move indoors affected the fitness of certain species? (Michael Pollan’s book, The Botany of Desire, poses a version of this question.) What are the relative environmental impacts of the live flower and artificial flower industries? Do houseplants support ecological food webs? (Which microbes and insects are having breakfast alongside me?) What happens when houseplants “escape” the indoor biome?

How is our attraction to coffee and broad-leaved plants shaping the ecological world?

Laura Jane Martin is a poet, essayist, and NSF graduate fellow at Cornell University, where she studies the ecology and evolution of wetland plants. She has a BS in Biophysics from Brown University. Follow her work at ljanemartin.com, on her new blog https://sedges.wordpress.com, and via Twitter @EntangledBank