Dr. Eleanor is on a roll!

Our Dr. Eleanor has been very busy these last few weeks. She’s written several new profiles for the Book of Common Ants. She had the brilliant idea to crowdsource a common name for the common ant Forelius pruinosus. AND she published a new research paper about the invasive Argentine ant losing ground to another invasive species, the Asian needle ant. In fact, that work was just featured in today’s Science Times.

We thought it would be fun to follow-up with Dr. Eleanor about this new research:

Based on your Book of Common Ants, we know you like to spend time poking around outdoors and observing ants.

I was supposed to be watching Argentine ant foraging patterns and the competition occurring between Argentine ants and native ants; I was helping out Alexei Rowles and John Brightwell, a post-doc and grad student, respectively, in Entomology at NC State. What I ended up mostly doing was following ants around, putting food out to see what they’d eat, poking around inside their nests, you know, the usual things one ends up doing when one is playing around with ants. 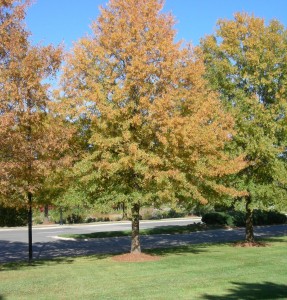 The oak trees (and pine mulch) in the office park where Dr. Eleanor made a surprising discovery.

So, Argentine ants nest in pine mulch around the bases of oak trees at this particular office park. They have huge nests (about as wide as a beach ball in some places) so that when you pull back the pine needles, it just looks like this big moving galaxy of ant workers and ant babies and ant queens. Not many other ant species live in this park, and no other ant species share tree bases with Argentine ants because Argentine ants are super aggressive and there are just so many of them.

Alexei pointed out one day that he thought he saw one of those newfangled Asian needle ants that we’d been hearing about from the work of another grad student, Benoit Guenard. Alexei said he saw it walking around the sidewalk.

So we went out and looked all over the park, using baits and pitfall traps and our eyes, and we ended up finding some creeping around on the sidewalk. When I followed them home, I realized their homes were built under the same pine straw mulch the Argentine ants were nesting in. In fact, their nests were actually nuzzled up right next to Argentine ants. We couldn’t believe it, so we started doing a few experiments with the ants, just playing around, to see what was going on over there. I ended up playing around with them for the next 4.5 years, trying to figure out what was happening. Turns out, a lot was happening.

Both Asian needle ants and Argentine ants are invasive species – harmful to nature and certainly in the case of Asian needle ants, potentially harmful to people (some people have severe allergic reactions to their stings). Leave us on a happier ant note. What cool things about ants might folks reading this be able to go out and observe in their backyards or neighborhood right now?

First, both of these ants are harmful to the environment, but by understanding what’s going on with them, we can help reduce their negative impact on the environment by developing ways to slow their spread and control them when they show up, as well as to predict what they might do to habitats when they show up. Also, figuring this stuff out is a whole lot of fun.

Second, with ants, there are so many questions to ask, and testing those questions is a joy. For beginners, it might be fun to follow them around and see where they take you. Sometimes they can point you to pretty cool stuff going on around you, like a windfall of seeds or a ferocious battle happening on the sidewalk pavement. Ants can give you an idea of what kinds of trees you have around you, the soil type, and the amount of mulching in your yard. You can follow ants home and see how they live. You can put out food and see if they’ll eat it, or who shows up to eat it. Maybe they’ll show you something you didn’t expect. Maybe you’ll want to come up with your own questions and test them.